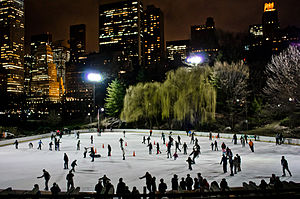 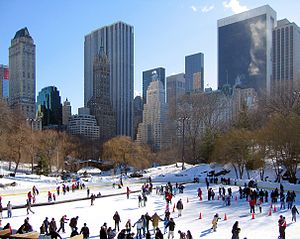 Wollman Rink during the daytime 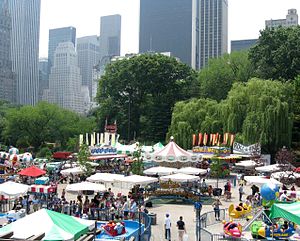 Wollman Rink is a public ice rink in the southern part of Central Park, Manhattan, New York City. The rink was opened in 1949 with funds donated by Kate Wollman (December 5, 1869 – October 15, 1955) who donated $600,000 for the rink to commemorate her entire family from Leavenworth, Kansas. Kate's brother was William J. Wollman who operated the W.J. Wollman & Co. stock exchange firm originally in Kansas City and later in New York. After he died in 1937 she helped administer his estate. Historically, the rink has been open for ice skating from October to April and in the summer seasons is transformed into a venue for other purposes.

The rink is on a site that was formerly part of the pond on the southeast corner of Central Park which was drained and filled in.[1]

For many years the rink was the venue for a series of outdoor summer rock, pop, country and jazz concerts. Then it was known as The Wollman Theater or "The Wollman Skating Rink Theater". In the summer of 1957, WOR-radio personality Jean Shepherd hosted a series of memorable jazz concerts at the Wollman with Billie Holiday, Bud Powell, Lionel Hampton, the Dave Brubeck Quartet, Dizzy Gillespie, Buddy Rich, Dinah Washington and others. The first summer music festival at the rink opened on July 1, 1966 and was sponsored by Rheingold Beer. The Rheingold Central Park Music Festival also took place during the summer of 1967.[2] The next summer, Schaefer Beer took over sponsorship. The first annual Schaefer Music Festival opened on June 27, 1968 and continued each summer through the summer of 1976.[2] The following summer, Dr Pepper became the sponsor, and the first Dr Pepper Music Festival opened on July 6, 1977 and ran annually through the summer of 1980.[2] Led Zeppelin, the original Allman Brothers Band and singers Tammy Wynette, Peggy Lee, Judy Collins and Pete Seeger are some of the greats who played the 5000-seat Wollman during those years.

Wollman Rink no longer hosts concerts, but in the summer it contains the Victorian Gardens Amusement Park.[2]

Wollman Rink has been featured in several movies, including Love Story and Serendipity.

The rink was closed in 1980 for an announced 2 1/2 years of renovations. When the problem-plagued work was not completed by the city by 1986, Donald Trump persuaded Mayor Ed Koch to let him complete the work and he completed the renovations in three months to have it open by the end of the year. Koch initially objected to Trump's proposal when Trump offered to pay for the renovations himself with the stipulation that he be allowed to run the venue and an adjacent restaurant and use the profits to recoup his costs. Public pressure prompted Mayor Koch to reverse his position.[3] The rink reopened to the public on November 13, 1986, with a ribbon-cutting ceremony and press conference attended by Koch and Trump, covered by national evening broadcast television news.[4][5]

Wollman Rink is currently operated by the Trump organization, and is today known as the Trump Skating Rink. Donald Trump operated the rink from 1987 to 1991.[6] From 1991 to 2001 George Makkos from The Makkos Organization of M&T Pretzel, operated Wollman Rink. Since 2001, Wollman Rink has been operated by a joint venture between Trump Organization and Rink Management Services of Mechanicsville, Virginia. The Trump name is prominently displayed on the walls of the rink as well as on the Zamboni that maintains the rink. Operation of the Lasker Rink on the north edge of Central Park is also handled by the group.

In 1961 Kate Wollman's estate donated funds for Wollman Rink in Prospect Park which closed in 2010. Among her other philanthropies was paying for the schooling of great nephew Henry Wollman Bloch, founder of H&R Block.[7][8][9][10]