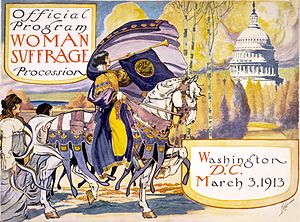 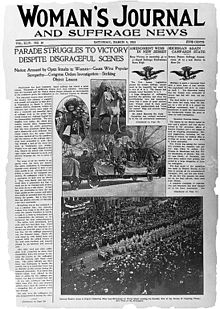 The woman suffrage parade of 1913, officially the Woman Suffrage Procession, was the first suffragist parade in Washington, D.C.. Organized by the suffragist Alice Paul for the National American Woman Suffrage Association, thousands of suffragists marched down Pennsylvania Avenue in Washington, D.C. on March 3, 1913. The march was scheduled on the day before President Woodrow Wilson's inauguration to "march in a spirit of protest against the present political organization of society, from which women are excluded", as the official program stated.

The march and the attention it attracted were monumental in advancing women's suffrage in the United States.[1]

American suffragists Alice Paul and Lucy Burns spearheaded a drive to adopt a national strategy for women's suffrage in the National American Woman Suffrage Association. Both women had been influenced by the militant tactics used by the British suffrage movement and recognized that the women from the six states that had full suffrage at the time comprised a powerful voting bloc. They submitted a proposal to Anna Howard Shaw and the NAWSA leadership at their annual convention in 1912. The leadership was not interested in changing their state-by-state strategy and rejected the idea of holding a campaign that would hold the Democratic Party responsible. Paul and Burns appealed to prominent reformer Jane Addams, who interceded on their behalf.[2]

The women persuaded NAWSA to endorse an immense suffrage parade in Washington, D.C. that was to coincide with newly elected President Woodrow Wilson's inauguration the following March. Paul and Burns were appointed chair and vice-chair of NAWSA's Congressional Committee.[3] They recruited Crystal Eastman, Mary Ritter Beard, and Dora Lewis to the Committee and organized volunteers, planned for, and raised funds in preparation of the parade with little help from the NAWSA.[4] Affiliates of NAWSA from various states organized groups to march and activities leading up to the march, such as the Suffrage Hikes.[5] Plans for the march were threatened when black suffragists announced they intended to participate, which lead white southern suffragists to threaten to boycott the event.[6] One solution discussed was segregating the black suffragists in a separate section to mollify white southern delegates.[7]

The parade itself was led by labor lawyer Inez Milholland, dressed dramatically in white and mounted on a white horse,[8] and included nine bands,[9] five mounted brigades, 26 floats, and close to 8,000 marchers,[10] including many notables such as Helen Keller, who was scheduled to speak at Constitution Hall after the march. Individuals came from European nations, Canada, India, Australia, New Zealand and many other countries around the world to support the movement. Most of the women marched in groups determined by their occupation or under their respective banners. Jeannette Rankin, from Montana, marched proudly under her state sign, only to return to Washington, D.C. four years later as the first U.S. congresswoman.[11]

After a good beginning, the marchers encountered crowds, mostly male, on the street that should have been cleared for the parade. They were jeered and harassed while attempting to squeeze by the scoffing crowds, and the police were sometimes of little help, or even participated in the harassment. The Massachusetts and Pennsylvania national guards stepped in. Eventually, boys from the Maryland Agricultural College created a human barrier protecting the women from the angry crowd and helping them progress forward to their destination.[12] Over 200 people were treated for injuries at local hospitals.[13] Despite all this, most of the marchers finished the parade and viewed an allegorical tableau presented near the Treasury Building.[1] Later, after Congress investigated the lack of police protection, the chief of police was fired.[11]

Considerable debates exists about the segregation of black woman suffragists in the parade. In a 1974 oral history interview, Alice Paul recalled the "hurdle" of Mary Church Terrell planning to bring a delegation from the National Association of Colored Women.[14] Delegations from the National Association of Colored Women and from the newly established Alpha Chapter of Delta Sigma Theta sorority from Howard University participated and black women marched in various state and occupational groups. While in Paul's memory a compromise was reached to order the parade as white women, then the men's section, and finally the Negro women's section, reports in the National Association for the Advancement of Colored People paper, The Crisis, depict events unfolding quite differently, with Black women protesting the plan to segregate them.[15] What is clear is that some groups did attempt on the day of the parade to segregate their delegations, and that women like Ida B. Wells-Barnett refused to comply.[16] 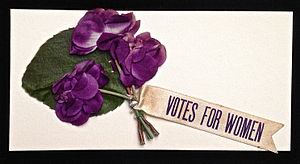 The mistreatment of the marchers by the crowd and the police caused a great furor. Alice Paul shaped the public response after the parade, portraying the incident as symbolic of systemic government mistreatment of women, stemming from their lack of a voice and political influence through the vote. She claimed the incident showed that the government's role in women's lives had broken down, and that it was incapable of even providing women with physical safety.

Journalist Nellie Bly, who had participated in the march, headlined her article "Suffragists are Men's Superiors". Senate hearings, held by a subcommittee of the Committee on the District of Columbia, started on March 6, only three days after the march, and lasted until March 17, with the result that the District's superintendent of police was replaced.[17] NAWSA praised the parade and Paul's work on it, saying "the whole movement in the country has been wonderfully furthered by the series of important events which have taken place in Washington, beginning with the great parade the day before the inauguration of the president".[1]

The Woman Suffrage Procession played a significant role in the 2004 film Iron Jawed Angels, which chronicled the strategies of Alice Paul, Lucy Burns, and the National Woman's Party as they lobbied and protested for the passage of the 19th Amendment to the U.S. Constitution which would assure women's voting rights.[18]