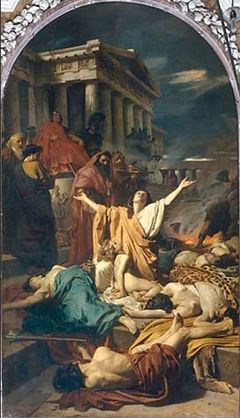 Antonio Ciseri's Martyrdom of the Seven Maccabees (1863), depicting the woman with her dead sons.

The woman with seven sons was a Jewish martyr described in 2 Maccabees 7 and other sources. Although unnamed in 2 Maccabees, she is known variously as Hannah,[1] Miriam,[2] and Solomonia.[3]

Shortly before the revolt of Judas Maccabeus (2 Maccabees 8), Antiochus IV Epiphanes arrested a mother and her seven sons, and tried to force them to eat pork. When they refused, he tortured and killed the sons one by one. The narrator mentions that the mother "was the most remarkable of all, and deserves to be remembered with special honour. She watched her seven sons die in the space of a single day, yet she bore it bravely because she put her trust in the Lord."[4] Each of the sons makes a speech as he dies, and the last one says that his brothers are "dead under God's covenant of everlasting life".[5] The narrator ends by saying that the mother died, without saying whether she was executed, or died in some other way.

The Talmud tells a similar story, but with refusal to worship an idol replacing refusal to eat pork. Tractate Gittin 57b cites Rabbi Judah saying that "this refers to the woman and her seven sons" and the unnamed king is referred to as the "Emperor" and "Caesar". The woman commits suicide in this rendition of the story: she "also went up on to a roof and threw herself down and was killed".[6]

Other versions of the story are found in 4 Maccabees (which suggests that the woman might have thrown herself into the flames, 17:1) and Josippon (which says she fell dead on her sons' corpses[1]).

Various sources have proposed names for this woman. In Lamentations Rabbah she is called Miriam bat Tanhum,[2] in the Eastern Orthodox tradition she is known as Solomonia,[3] while in the Armenian Apostolic Church she is called Shamuna,[7] and in the Syriac Church she is known as Shmuni.[8] She is called "Hannah" (or "Chana") in Josippon, perhaps as a result of connecting her with Hannah in the Book of Samuel, who says that the "barren woman bears seven," (1 Samuel 2:5). Gerson Cohen notes that this occurs only in the longer Spanish version of Josippon (1510), while the shorter Mantuan version (c. 1480) continues to refer to her anonymously.[1] 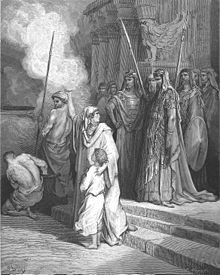 The Courage of a Mother, an illustration of this story by Gustave Doré, 1866.

The woman with seven sons is remembered with high regard for her religious steadfastness, teaching her sons to keep to their faith, even if it meant execution. The Maccabees story reflects a theme of the book, that "the strength of the Jews lies in the fulfillment of the practical mitzvot".[9]

It is probable that Hilary of Poitiers refers to this woman as a prophet. Hilary says "For all things, as the Prophet says, were made out of nothing,"[10] and, according to Patrick Henry Reardon, he is quoting 2 Maccabees 7:28.[11]

Roman Catholic apologist Jimmy Akin uses this story to defend the Deuterocanonical books. He examines Hebrews 11:35 ("Some were tortured, refusing to accept release, that they might rise again to a better life") and notes that this hope of eternal life after torture is not found anywhere in the Protestant Old Testament, but is found in 2 Maccabees 7.[12]

According to Antiochene Christian tradition, the relics of the mother and sons were interred on the site of a synagogue (later converted into a church) in the Kerateion quarter of Antioch.[1] On the other hand, tombs believed to be those of these martyrs were discovered in San Pietro in Vincoli in 1876.[13] An additional tomb believed to be that of the woman with her seven sons is located in the Jewish cemetery of Safed.

Although they are not the same as the Hasmonean rulers called Maccabees, the woman and her sons, along with the Eleazar described in 2 Maccabees 6, are known as the "Holy Machabees" or "Holy Maccabean Martyrs" in the Catholic Church and the Eastern Orthodox Church. 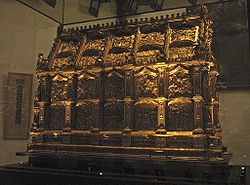 What is believed to be the Maccabees' relics - kept in the Maccabees Shrine - is venerated in St. Andrew Church, Cologne, Germany.

The Orthodox Church celebrates the Holy Maccabean Martyrs on August 1. The Catholic Church also includes them in its official list of saints that have August 1 as their feast day. From before the time of the Tridentine Calendar, the Holy Maccabees had a commemoration in the Roman Rite liturgy within the feast of Saint Peter in Chains. This commemoration remained within the weekday liturgy when in 1960 Pope John XXIII suppressed this particular feast of Saint Peter. Nine years later, 1 August became the feast of Saint Alphonsus Maria de' Liguori and the mention of the Maccabee martyrs was omitted from the General Roman Calendar, since in its 1969 revision it no longer admitted commemorations.[16] Since they are among the saints and martyrs recognized in the Roman Martyrology,[17] they may be venerated by all Catholics everywhere.

According to Eastern Orthodox tradition, the sons are called Abim, Antonius, Gurias, Eleazar, Eusebonus, Alimus and Marcellus,[3] though the names differ slightly among different authorities.[18]

The three Ethiopian books of Meqabyan (canonical in the Ethiopian Orthodox Church, but distinct works from the other four books of Maccabees) refer to an unrelated group of "Maccabean Martyrs," five brothers including 'Abya, Seela, and Fentos, sons of a Benjamite named Maccabeus, who were captured and martyred for leading a guerilla war against Antiochus Epiphanes.[19]

Various mystery plays in the Middle Ages portrayed the Maccabean martyrs, and depictions of their martyrdom possibly gave rise to the term "macabre", perhaps derived from the Latin Machabaeorum.[20]