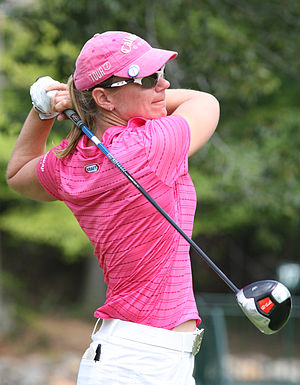 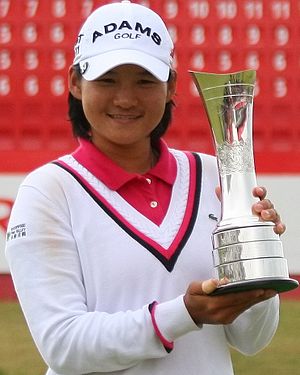 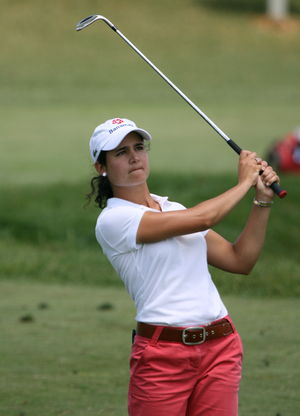 Women's golf has a set of major championships which parallels that in men's golf, with the women's system newer and less stable than the men's. As of 2013, five tournaments are designated as majors in women's golf.

The LPGA's list of majors has changed several times over the years. The two most recent changes were:

As of 2015, the order in which women's majors are played:

Before The Evian Championship became the fifth LPGA major, the setup of women's majors closely paralleled that of the mainstream (i.e., under-50) men's majors. In both cases, the United States hosts three majors and the United Kingdom one. The Evian Championship, as noted above, is held in France. The U.S. and British Opens, and the PGA Championship match their male equivalents. The ANA Inspiration (previously the Kraft Nabisco Championship) is the closest equivalent of The Masters. The two tournaments share several characteristics. Both are the first majors of their respective seasons; both are held at the same course every year; and both have a unique tradition surrounding the winner: the presentation of the green jacket at The Masters, and the jump into the 18th-hole pond at the ANA Inspiration.

From 2006 through 2008, the winners of the four women's majors received automatic entry to the LPGA's season championship, the LPGA Tour Championship. Beginning in 2009, the Tour Championship extended entry to all players in the top 120 on the official LPGA Money List. Starting in 2011, the Tour Championship was replaced by the CME Group Titleholders; from that point through 2013, the top three finishers at all official tour events, including the majors, who had not already qualified for the Titleholders earned entries. Starting in 2014, the LPGA adopted a points race similar in some ways to the PGA Tour's FedEx Cup. In the new system, officially called the "Race to the CME Globe", the top 72 points earners during the season, plus all tournament winners, qualify for the renamed final event, the CME Group Tour Championship, in which the top nine points earners will have at least a mathematical chance of winning the season title.

Eight different events are classified as having been LPGA majors at some time. The number in each season has fluctuated between two and five. The first tournament which is now included in the LPGA's official list of major victories is the 1930 Women's Western Open, although this is a retrospective designation as the LPGA was not founded until 1950.[3]

No woman has completed a four-major Grand Slam, much less one with five majors. Babe Zaharias won all three majors contested in 1950 and Sandra Haynie won both majors in 1974.

Six women have completed a "Career Grand Slam" by winning four different majors during the four-major era. There are variations in the set of four tournaments involved as the players played in different eras. The six are: Pat Bradley; Juli Inkster; Annika Sörenstam; Louise Suggs; Karrie Webb; and Mickey Wright.

Consecutive victories at a major championship

Note: These golfers are also included below in the Two victories section.

In men's (non-senior) golf, the four majors are agreed globally. All the principal tours acknowledge the status of the majors via their sponsorship of the Official World Golf Ranking, and the prize money is official on the three richest regular tours (the PGA, European, and Japanese tours). This is not the case in women's golf, but the significance of this is limited, as the LPGA Tour is much more dominant in women's golf than the PGA Tour is in men's golf. For example, the BBC has been known to use the LPGA definition of women's majors without qualifying it. Also, before the Evian Masters was elevated to major status, the Ladies' Golf Union, the governing body for women's golf in the UK and Republic of Ireland and the organiser of the Women's British Open, stated on its official site that the Women's British Open is "the only Women's Major to be played outside the U.S."[5]

The Ladies European Tour does not sanction any of the LPGA majors which are played in the United States, and only has two events which it designates as majors on its schedule, namely the Women's British Open and The Evian Championship (historically the Evian Masters), which is played in France. The Ladies European Tour had long tacitly acknowledged the dominance of the LPGA Tour by not scheduling any of its events to conflict with any of the LPGA majors played in the U.S., but that changed slightly in 2008 when the LET scheduled a tournament opposite the LPGA Championship. Also, while the LPGA Tour did not recognize the then-Evian Masters as a major until 2013, it began co-sanctioning the tournament as a regular tour event in 2000. Because it was played the week before the Women's British Open (except in 2012, when the latter event was moved to September to avoid conflict with the London Olympics), and the purse was (and remains) one of the largest on the LPGA Tour, virtually all top LPGA players played the Evian Masters before its elevation to major status. The Evian Championship has now moved to September. (During the 2006–08 period, its winner also received an automatic berth in the LPGA Tour Championship.)

The LPGA of Japan Tour, which is the second richest women's golf tour[citation needed], has its own set of four majors: the World Ladies, the Japan Open, the JLPGA Championship and the JLPGA Tour Championship. However, these events attract little notice outside Japan, and to a lesser degree South Korea (since a number of Koreans now play on the Japan tour).

Since 2006, the Symetra Tour, the LPGA's developmental tour known through 2011 as the Futures Tour, has designated the Tate & Lyle Players Championship, an event which has been held since 1985, as a major championship. It was the Tour's first $100,000 purse.

Professional women's senior golf is in its infancy, and does not yet have a roster of majors. The Legends Tour, originally the Women's Senior Golf Tour, played its first season in 2001.