Women in the World Wars

From Infogalactic: the planetary knowledge core
(Redirected from Women's roles in the World Wars)
Jump to: navigation, search 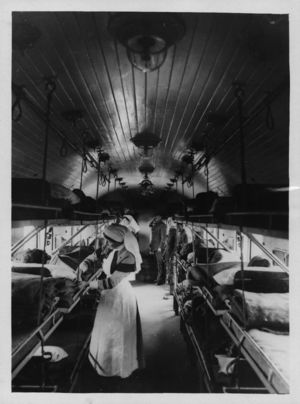 During the twentieth century, women in the World Wars became indispensable for the total mobilization of society's resources.

Before the First World War, the traditional paid female roles in western countries were mostly restricted to the domestic sphere, as servants and housewives, plus factory jobs in textiles, nursing and clothing.

While some women managed to enter the traditionally male career paths, women, for the most part, were expected to be primarily involved in "duties at home" and "women's work". Before 1914, only a few countries, including New Zealand, Australia, and several Scandinavian nations, had given women the right to vote (see Women's suffrage), but otherwise, women were minimally involved in the political process.

The two world wars hinged as much on industrial production as they did on battlefield clashes. With millions of men away fighting and with the inevitable casualties, there was a severe shortage of labour in a range of industries, from rural and farm work to urban office jobs.

During both world wars women were needed by the national war effort to undertake new roles.[1] In Great Britain, this was known as a process of "Dilution" and was strongly contested by the trade unions, particularly in the engineering and ship building industries.[1] For the duration of both World Wars, women did take on skilled "men's work".[1] However, in accordance with the agreement negotiated with the trade unions, women undertaking jobs covered by the Dilution agreement lost their jobs at the end of the First World War.[1] 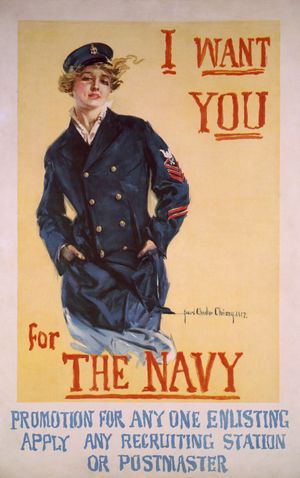 By 1914 nearly 5.09 million out of the 23.8 million women in Britain were working. Thousands worked in munitions factories (see Canary girl), offices and large hangars used to build aircraft.[1] Women were also involved in knitting socks for the soldiers on the front, as well as other voluntary work, but as a matter of survival women had to work for paid employment for the sake of their families. Many women worked as volunteers serving at the Red Cross, encouraged the sale of war bonds or planted "victory gardens".

Not only did women have to keep "the home fires burning" but they took on voluntary and paid employment that was diverse in scope and showed that women were highly capable in diverse fields of endeavour. There is little doubt this expanded the view of the role of women in society and changed the outlook of what women could do and their place in the workforce. Although women were still paid less than men in the workforce, pay inequalities were starting to diminish as women were now getting paid two-thirds of the typical pay for men. Which is a 28% progress. However, the extent of this change is open to historical debate. In part because of female participation in the war effort Canada, the USA, Great Britain, and a number of European countries extended suffrage to women in the years after the First World War.

British historians no longer emphasize the granting of woman suffrage as a reward for women's participation in war work. Pugh (1974) argues that enfranchising soldiers primarily and women secondarily was decided by senior politicians in 1916. In the absence of major women's groups demanding equal suffrage, the government's conference recommended limited, age-restricted women's suffrage. The suffragettes had been weakened, Pugh argues, by repeated failures before 1914 and by the disorganizing effects of war mobilization; therefore they quietly accepted these restrictions, which were approved in 1918 by a majority of the War Ministry and each political party in Parliament.[2] More generally, Searle (2004) argues that the British debate was essentially over by the 1890s, and that granting the suffrage in 1918 was mostly a byproduct of giving the vote to male soldiers. Women in Britain finally achieved suffrage on the same terms as men in 1928.[3]

Nursing became almost the only area of female contribution that involved being at the front and experiencing the war. In Britain the Queen Alexandra's Royal Army Nursing Corps, First Aid Nursing Yeomanry and Voluntary Aid Detachment were all started before World War I. The VADs were not allowed in the front line until 1915.

More than 12,000 women enlisted in the United States Navy and Marine Corps during the First World War. About 400 of them died in that war.[4]

Over 2,800 women served with the Royal Canadian Army Medical Corps during the First World War and it was during that era that the role of Canadian women in the military first extended beyond nursing.[5] Women were given paramilitary training in small arms, drill, first aid and vehicle maintenance in case they were needed as home guards.[5] Forty-three women in the Canadian military died during WWI.[5]

The only belligerent to deploy female combat troops in substantial numbers was the Russian Provisional Government in 1917. Its few "Women's Battalions" fought well, but failed to provide the propaganda value expected of them and were disbanded before the end of the year. In the later Russian Civil War, the Bolsheviks would also employ women infantry.[6] 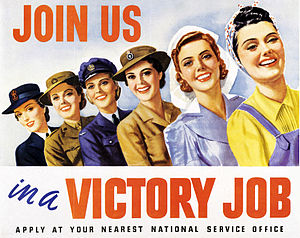 In many nations women were encouraged to join female branches of the armed forces or participate in industrial or farm work.

Women in World War II took on a variety of roles from country to country. World War II involved global conflict on an unprecedented scale; the absolute urgency of mobilizing the entire population made the expansion of the role of women inevitable. The hard skilled labor of women was symbolized in the United States by the concept of Rosie the Riveter, a woman factory laborer performing what was previously considered man's work.

With this expanded horizon of opportunity and confidence, and with the extended skill base that many women could now give to paid and voluntary employment, women's roles in World War II were even more extensive than in the First World War. By 1945, more than 2.2 million women were working in the war industries, building ships, aircraft, vehicles, and weaponry. Women also worked in factories, munitions plants and farms, and also drove trucks, provided logistic support for soldiers and entered professional areas of work that were previously the preserve of men. In the Allied countries thousands of women enlisted as nurses serving on the front lines. Thousands of others joined defensive militias at home and there was a great increase in the number of women serving for the military itself, particularly in the Soviet Union's Red Army.

During World War II, approximately 400,000 U.S. women served with the armed forces and more than 460 — some sources say the figure is closer to 543 — lost their lives as a result of the war, including 16 from enemy fire. Women became officially recognized as a permanent part of the U.S. armed forces after the war with the passing of the Women's Armed Services Integration Act of 1948.

The ability for women to be involved overseas opened doors for many underrepresented groups, including Latinas, to serve their country.

Several hundred thousand women served in combat roles, especially in anti-aircraft units. The U.S. decided not to use women in combat because public opinion would not tolerate it.

Many women served in the resistances of France, Italy, and Poland, and in the British SOE and American OSS which aided these.

Other women, called comfort women, were forced into sexual slavery by the Imperial Japanese Army before and during World War II.

Approximately 2 million Jewish women in the Holocaust were killed, and the Nazis also killed other women who belonged to groups they were committing genocide against, such as women with disabilities and Roma women.

Canadian women in the World Wars became indispensable because the World Wars were total wars that required the maximum effort of the civilian population. While Canadians were deeply divided on the issue of conscription for men, there was wide agreement that women had important new roles to play in the home, in civic life, in industry, in nursing, and even in military uniforms. Historians debate whether there was much long-term impact on the postwar roles of women.

Women on the homefront