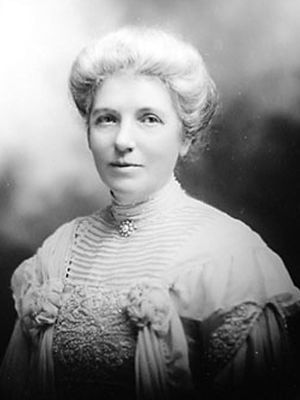 Women's suffrage in New Zealand was an important political issue in the late 19th century. In early colonial New Zealand, as in other European societies, women were excluded from any involvement in politics. Public opinion began to change in the latter half of the 19th century, however, and after years of effort by suffrage campaigners, led by Kate Sheppard, New Zealand became the first self-governing colony in the world in which all women had the right to vote in parliamentary elections.[1]

The Electoral Bill granting women the franchise was given Royal Assent by Governor Lord Glasgow on 19 September 1893.[2] Women voted for the first time in the election held on 28 November 1893 (elections for the Māori electorates were held on 20 December). In 1893, Elizabeth Yates also became Mayor of Onehunga, the first time such a post had been held by a female anywhere in the British Empire.[3]

The struggle for women's suffrage 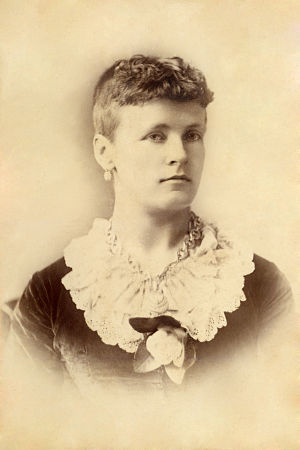 Portrait of an unknown suffragette, Charles Hemus Studio Auckland, circa 1880. The sitter wears a white camellia and has cut off her hair, both symbolic of support for advancing women's rights.

Women's suffrage was granted after about two decades of campaigning by women throughout New Zealand, including Kate Sheppard and Mary Ann Müller. The New Zealand branch of the Women's Christian Temperance Union led by Anne Ward was particularly instrumental in the campaign. Influenced by the American branch of the Women's Christian Temperance Movement, and the philosophy of thinkers like Harriet Taylor Mill and John Stuart Mill, the movement argued that women could bring morality into democratic politics.[4] Opponents argued instead that politics was outside women's 'natural sphere' of the home and family. Suffrage advocates countered that allowing women to vote would encourage policies which protected and nurtured families.

From 1887, various attempts were made to pass bills enabling female suffrage, the first of which was authored by Julius Vogel, the 8th Premier of New Zealand. Each bill came close to passing. Several electoral bills that would have given adult women the right to vote were passed in the House of Representatives but defeated in the upper Legislative Council.

In 1891 Walter Carncross moved an amendment that was intended to make a new bill fail in the Legislative Council. His amendment was for women to become eligible to be voted into the House of Representatives and in this way Carncross ensured that the conservative Upper House would reject the bill. This tactic infuriated the suffragette Catherine Fulton, who organised a protest at the 1893 election.[6] An 1892 Electoral Bill, introduced by John Ballance, provided for the enfranchisement of all women, but controversy over an impractical postal vote amendment caused its abandonment. 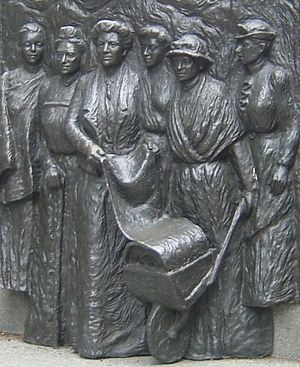 By 1893 there was considerable popular support for women's suffrage. The 1893 Women's Suffrage Petition was presented to Parliament and a new Electoral Bill passed through the Lower House with a large majority. During debate, there was majority support for the enfranchisement of Māori as well as Pākehā women. Lobbyists for the liquor industry, concerned that women would force the prohibition of alcohol, petitioned the Upper House to reject the bill. Suffragists responded with mass rallies and telegrams to Members of Parliament. They gave their supporters in Parliament white camellias to wear in their buttonholes. The Upper House was divided on the issue, and Premier Richard Seddon hoped to stop the bill.

Seddon needed one more vote to defeat the measure in the Upper House. A new Liberal Party councillor, Thomas Kelly, had decided to vote in favour of the measure, but Seddon obtained his consent by wire to change his vote. Seddon's manipulation incensed two other councillors William Hunter Reynolds and Edward Cephas John Stevens, so they changed sides and voted for the bill, allowing it to pass by 20 votes to 18 on 8 September 1893. The two opposition councillors had been opposed to woman's suffrage without the 'electoral rights' safeguard of postal voting; seen as necessary to allow all women in isolated rural areas to vote, although seen by the Liberals as making the vote open to manipulation by husbands or employers.[7]

Eighteen legislative councillors petitioned the new governor, Lord Glasgow, to withhold his consent in enacting the law, but on 18 September 1893 the governor consented and The Electoral Act 1893 gave all women in New Zealand the right to vote.

Both the Liberal government and the opposition subsequently claimed credit for the enfranchisement of women, and sought women's newly acquired votes on these grounds.[8]

In 1893, Elizabeth Yates became the first woman in the British Empire to become mayor, though she held the post in Onehunga, a city now part of Auckland, only for about a year.

Women were not eligible to be elected to the House of Representatives until 1919 though, when three women, including Ellen Melville stood. Elizabeth McCombs was the first woman to win an election (to the Lyttelton seat held by her late husband, via widow's succession) in the 1933 by-election, followed by Catherine Stewart (1938), Mary Dreaver (1941), Mary Grigg (1942) and Mabel Howard (1943). Melville stood for the Reform Party and Grigg for the National Party, while Stewart, Dreaver and Howard were all Labour Party. The first Maori woman MP was Iriaka Ratana in 1949; she also succeeded to the seat held by her late husband.

Women were not eligible to be appointed to the New Zealand Legislative Council (the Upper House of Parliament) until 1941. The first two women (Mary Dreaver and Mary Anderson) were appointed in 1946 by the Labour Government. In 1950 the "suicide squad" appointed by the National Government to abolish the Legislative Council included three women: Mrs Cora Louisa Burrell of Christchurch, Mrs Ethel Marion Gould of Auckland and Mrs Agnes Louisa Weston of Wellington.

The New Zealand Suffrage Centennial Medal 1993 was authorised by the Queen by Royal Warrant dated 1 July 1993, and was awarded to 546 selected persons in recognition of their contribution to the rights of women in New Zealand or to women's issues in New Zealand or both.[9]