Women in Italy are women who live in or are from Italy. The legal and social status of Italian women has undergone rapid changes during the past decades, which have seen several transformations, including in the area of family laws, the enactment of anti-discrimination measures, and reforms to the penal code, in particular with regard to crimes of violence against women.[4]

For the Roman period, see Women in Ancient Rome. 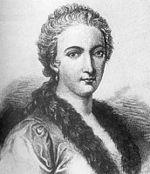 Maria Gaetana Agnesi, an Italian mathematician and linguist, who was, according to Dirk Jan Struik "the first important woman mathematician since Hypatia (fifth century A.D.)".

There were some distinguished women in Italy before the 1950s, such as Elena Piscopia (the world's first female laureate), Maria Gaetana Agnesi (scholar, mathematician and philosopher) and Maria Montessori (educator).[5]

Today women have equal rights as men, and have mainly the same job, business and education opportunities.[5]

Abortion laws were liberalized in 1978: abortion is usually legal during the first trimester of pregnancy, while at later stages of pregnancy it is permitted only for medical reasons, such as problems with the health of the mother or fetal defects.[8] However, in practice it is often difficult to obtain an abortion, due to the rising number of conscientious objectors among doctors and nurses (who refuse to perform an abortion based on moral/religious opposition, which they are legally allowed to do[4]).[9]

Divorce in Italy was legalized in 1970. Obtaining a divorce in Italy is still a lengthy and complicated process, requiring a period of legal separation before it can be granted,[10] although the period of separation has been reduced in 2015.[11] Adultery was decriminalized in 1969, after the Constitutional Court of Italy struck down the law as unconstitutional, because it discriminated against women.[12] In 1975, law no 151/1975 provided for gender equality within marriage, abolishing the legal dominance of the husband.[4][13]

Unmarried cohabitation in Italy and births outside of marriage are not as common as in many other Western countries, but in recent years they have increased. In 2014, 27.6% of all births were outside of marriage, but there are significant differences by regions, with unmarried births being more common in the North than in the South.[14]

Women in Italy tend to have highly favorable results, and mainly excel in secondary and tertiary education.[5] Ever since the Italian economic miracle, women's literacy rate and university enrollment has gone up dramatically in Italy.[5] The literacy rate of women is only slightly lower than that of men (as of 2011, the literacy rate was 98.7% female and 99.2% male).[15] 60% of Italian university graduates are female, and women are excellently represented in all academic subjects, including mathematics, information technology and other technological areas which are usually occupied by males.[5]

Female standards at work are generally of a high quality and professional, but are not as good as in education.[5] The probability of a woman getting employed is mainly related to her qualifications, and 80% of women who graduate from university go to look for jobs.[5] Women in Italy face a number of challenges. Although gender roles are not as strict as they have been in the past, sexual and domestic abuse is still quite prevalent in Italy. On average, women do 3.7 hours more housework than men. Men make up the majority of the parliament, women represent less than a third of the parliament.[16] Additionally, women in Italy are not adequately represented in the workforce, as Italy has one of the lowest rates of employment for women of the countries within the European Union (only 46% of women have jobs). Many women are still frequently expected to stay at home and care for the house and children, as opposed to earning a salary and becoming a breadwinner; and only 5% of senior managerial positions are held by women. Furthermore, there are unequal standards and expectations for the few women who actually make it into a professional setting. For example, 9% of working Italian mothers have been fired due to pregnancy. Critics say that the existing legislation is adequate and fair, but the social climate still does not reflect full equality, nor does it protect against abuse. Italian lawmakers are working to further protect and support women as they break gender stereotypes and join the workforce, but complete cultural change is slow.[17][18][19]

Women holding white collar, high level or office jobs tend to get paid the same as men, but women with blue collar or manual positions are paid 1/3 less than their male counterparts.[5] ai

There is, today, a growing acceptance of gender equality, and people (especially in the North[20]) tend to be far more liberal towards women getting jobs, going to university and doing stereotypically male things. However, in some parts of society, women are still stereotyped as being simply housewives and mothers, also reflected in the fact of a higher-than-EU average female unemployment.[21]

Traditionally, as in other Mediterranean European areas, the concept of family honor was very important in Italy. Indeed, until 1981, the Criminal Code provided for mitigating circumstances for so called honor killings.[23] Traditionally, honor crimes used to be more prevalent in Southern Italy.[24][25]