Woodberry Wetlands is a nature reserve and designated Site of Metropolitan Importance on the site of the East Reservoir in Stoke Newington, Hackney, London. The site opened to the public for the first time in 200 years on 1 May 2016.[1][2] Covering 4.5 ha (11 acres) and situated close to the Lee Valley, Woodberry Wetlands was acquired as a nature reserve in 2014. The site is owned by Thames Water and run by London Wildlife Trust.

After a major redevelopment, the newly transformed East Reservoir offers free public access and the opportunity to enjoy nature in the heart of north-east London. The reserve was developed by London Wildlife Trust in collaboration with Thames Water, Berkeley Homes and London Borough of Hackney, with funding from Heritage Lottery Fund.[3] The site contains a boardwalk, a visitors' centre with café, toilet facilities and a classroom. The New River Path runs alongside the northern edge of the reservoir.

London Wildlife Trust are also working with London Borough of Walthams Forest and Thames Water,[4] overseeing the development of the Walthamstow reservoirs into Walthamstow Wetlands only 3 km (1.9 mi) away. 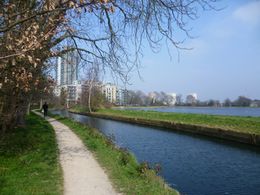 The New River by the Woodberry Down Estate

Before the 1600s London's water supply was mostly reliant on the River Thames, local streams, wells and springs.[5] King James I authorised the construction of the New River in 1604 to bring clean water from springs in Hertfordshire and Middlesex to London.

Created in 1833, the Stoke Newington reservoirs stored water from The New River. The banks of the reservoirs were lined at higher levels with stones taken from London Bridge,[6] then in the course of demolition.

Presently, water is temporarily held at the East Reservoir before processing at Walthamstow Reservoirs. The west reservoir has been converted into a water sports centre.[7]

The Coal House, built in 1833 is a Grade II listed building and is the oldest building on the site.[8] The building was previously used as a coal store for a nearby boiler house and as a kitchen to serve the New River Company directors’ dining hall. The building has been inaccessible and disused for many years and suffered from significant structural damage.

Lizzy's at the Coal House

The Coal House has undergone significant renovation and has been returned to a previous function as a kitchen called Lizzy's at The Coal House which will open on 1 May 2016.

Woodberry Wetlands is located close to the Lee Valley and is a popular resting place for migratory birds that move to and from the Lee Valley Special Protection Area, with waterfowl such as pochard, shoveler and gadwall visiting the site. Grey heron, tufted duck, reed bunting and other wetland birds are also present, along with kingfisher and other species such as damselflies, dragonflies, amphibians and bats.[9]

A significant expansion of the reed beds, organised by London Wildlife Trust, will provide increased wildlife habitat with the aim of encouraging more reed bunting and reed warbler to breed at the site, as well as provide additional habitat for over wintering bittern.[10]

Up until 2016 access had been restricted to the public for over 200 years.

In 2014 the site was acquired by London Wildlife Trust. The site subsequently underwent a period of construction and development to ensure that it was accessible to the public. Woodberry Wetlands opened on 1 May 2016 and is free to visit.[11]