From Infogalactic: the planetary knowledge core
Jump to: navigation, search
For the Georgian villa in south-east London, see Woodlands House.

Woodland House is a large detached house at 31 Melbury Road (originally 11 Melbury Road), in the Holland Park district of Kensington and Chelsea, W14. Built in the Queen Anne style by the architect Richard Norman Shaw, it is a Grade II* listed building.[2]

Commissioned by the painter Luke Fildes, it was latterly occupied by the film director Michael Winner.[3][4] Woodland House is situated next to William Burges' Grade I listed Tower House.[4]

Originally 11 Melbury Road, the house was renumbered as 31 Melbury Road in 1967.[5] It was the second of two houses in Melbury Road designed by Shaw, the first, 8 Melbury Road, was designed for fellow painter Marcus Stone.[5] Fildes and Stone were artistic rivals and each naturally regarded their own Shaw-designed house as superior.[5] Of the construction of Woodland House Fildes wrote in November 1876 that "The house is getting on famously and looks stunning...It is a long way the most superior house of the whole lot; I consider it knocks Stone's to fits, though of course he wouldn't have that by what I hear he says of his, but my opinion is the universal one."[5] Fildes took up residence in Woodland House in October 1877 and lived there until his death in the house in February 1927. Fildes was survived by his wife and six children.[6]

In 1959 the London County Council commemorated Fildes at Woodland House with a blue plaque.[7]

The development of Melbury Road in the grounds of Little Holland House created an art colony in Holland Park, the inhabitants of which became known as the Holland Park Circle.[8]

Shaw congratulated Fildes on acquiring "such a delicious site" in May 1875.[5] The site was recommended to Fildes by Val Prinsep, it is at the bend of Melbury Road, with vistas to the south and west, adjoining Holland Lane (now Ilchester Place) on the east. The garden spans three quarters of an acre and contains tropical and native trees. The gardens of Woodland House and the adjoining Tower House both contain trees from the former Little Holland House.[9] 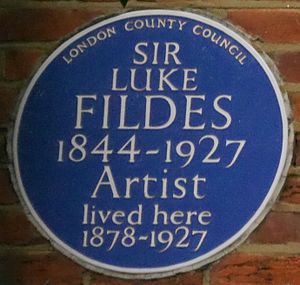 Woodland House was designed by architect Richard Norman Shaw. Shaw was well acquainted with members of the art establishment, being friends with Dante Gabriel Rossetti, William Morris and Philip Webb.[10] The choice by Fildes and Stone of Richard Norman Shaw as the architect of their houses was an important symbol of their ambition to become academicians, members of the Royal Academy of Arts, and of the art establishment themselves.[11] The imposing houses and studios that Shaw designed would impress potential patrons.[11] All of the "studio-houses" of the Holland Park Circle were built with red bricks, a colour that stood in contrast to the white stucco that had been traditionally used in the surrounding area.[12]

Shaw had prepared preliminary designs of Woodland House by August 1875, and constructed by W. H. Lascelles, building began early in 1876.[5] The initial cost of building the house was £4,500.[13] Fildes and his family moved into the house in the Autumn of 1877.[14] Fildes house was larger than Marcus Stone's, and costlier to build.[15] Shortly after Fildes had commissioned Shaw to design his house, Fildes' grandmother, Mary, had died, leaving him her property.[15]

Facing south, Fildes large artists studio was at the rear of the house and was lit by a skylight and six tall windows grouped in three pairs.[5] This arrangement did not apparently provide sufficient light and the central pair were altered in 1881 to provide the present large four-light window which rises to the roof parapet.[5] The studio was initially 43 feet long and 24 feet wide.[13] A winter studio was added in 1880, followed by a glass studio in 1885, situated above a nursery. When King Edward VII came to sit for a state portrait he described the studio as "one of the finest rooms in London".[5]

In 1893 The Strand Magazine described Fildes' house as "that of the artist – everything has its own artistic place and corner; nothing fails to harmonise, nothing comes short of ganing the effect wanted".[13] The interior was noted by the Strand Magazine to contain predominantly Sheraton style furniture with "Venetian and Flemish black-framed mirrors, Hispano-Muresque pottery, Venetian brass and coppper-ware...blue-and-white Nankin and Delft (porcelain)".[13]

Fildes' children's bedrooms were hung with wallpapers designed by Morris & Co. and Walter Crane.[13] Under Fildes' the hallway was encrusted with crimson and gold, and after passing through crimson curtains a visitor ascended stairs lined with brass plates, paintings from the Italian renaissance and tapestries.[13]

Winner's father split the house into three flats, erected walls and installed false ceilings.[16] Winner restored the original layout of the house even sourcing contemporary bricks from demolished buildings.[16] A folly was also restored to the roof of the house by Winner as well as the original wrought iron gates.[17]

Under Winner the house had 47 rooms and some 2,000 lightbulbs.[16] Amenities included a jacuzzi, swimming pool, steam room, and cinema.[16] Winner hired the services of interior designer Tessa Kennedy to help him renovate the house,[18] originally wishing Woodland House to look like the "home of a country vicar", but by the finish of the work Winner described it as "completely over the top" and said it resembled the "house of a lottery winner".[16] 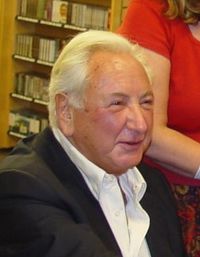 Film director Michael Winner's parents acquired Woodland House after the Second World War, when his father paid £2,000 for a 17-year lease on the house.[19] After his parents emigrated to France in 1972 Winner purchased Woodland House from them to avoid a punitive gift tax.[20] At the time of Winner's purchase of the house from his parents, Woodland House consisted of one flat and two other rent-controlled flats, with 17 years remaining on the leasehold. Winner subsequently negotiated a new leasehold in 1972 for £150,000, extending the lease to the 2040s.[20][21]

Winner was an art collector, and was a connoisseur of British illustration. Winner's art collection included works by Jan Micker, William James, Edmund Dulac, E. H. Shepard, Arthur Rackham, Kay Nielsen and Beatrix Potter.[19] His collection once included almost 200 signed colour-washed illustrations by Donald McGill.[19] It was announced in 2008 that Winner intended to leave the house as a museum, but discussions with Kensington and Chelsea council apparently stalled after they were unable to meet the £15 million cost of purchasing the freehold of the property, which expires in 2046.[18] The freehold is owned by the Ilchester Estate.[1]

Informal discussions had taken place with the curator of the Leighton House Museum, situated in the adjacent street and also owned by the council.[19] Winner had wished to greet future visitors to Woodland House as a talking waxwork statue, uttering a variation on his catch phrase, "Calm down, dear, I'm only a dummy".[16][18]

Woodland House is now owned by the singer Robbie Williams.[23]