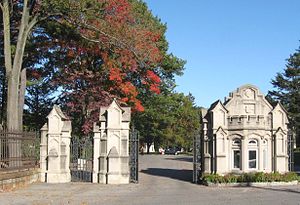 Woodlawn Cemetery is a designated National Historic Landmark. Although located in Woodlawn, Bronx and one of the largest cemeteries in New York City, it has the character of a rural cemetery. Woodlawn Cemetery opened in 1863,[1] in what was then southern Westchester County, in an area that was later annexed to New York City in 1874.[2] It is notable in part as the final resting place of some great figures in the American arts, such as authors Countee Cullen and Herman Melville, and musicians Irving Berlin, Miles Davis, Duke Ellington, and Max Roach.[3][4]

The Cemetery covers more than 400 acres (160 ha)[1] and is the resting place for more than 300,000 people. It is also the site of the "Annie Bliss Titanic Memorial", dedicated to those who perished in the 1912 maritime disaster. Built on rolling hills, its tree-lined roads lead to some unique memorials, some designed by famous American architects: McKim, Mead & White, John Russell Pope, James Gamble Rogers, Cass Gilbert, Carrère and Hastings, Sir Edwin Lutyens, Beatrix Jones Farrand, and John La Farge. The cemetery contains seven Commonwealth war graves – six British and Canadian servicemen of World War I and an airman of the Royal Canadian Air Force of World War II.[5] In 2011, Woodlawn Cemetery was designated a National Historic Landmark, since it shows the transition from the rural cemetery popular at the time of its establishment to the more orderly 20th-century cemetery style.[6]

Woodlawn was the destination for many human remains disinterred from cemeteries in more densely populated parts of New York City:[8]