The Woodrow Wilson International Center for Scholars (or Wilson Center), located in Washington, D.C., is a United States Presidential Memorial that was established as part of the Smithsonian Institution by an act of Congress in 1968. It is also a highly recognised think tank, ranked among the top ten in the world.[1]

Named in honor of President Woodrow Wilson (the only President of the United States with a Ph.D.), its mission is "to commemorate the ideals and concerns of Woodrow Wilson by: providing a link between the world of ideas and the world of policy; and fostering research, study, discussion, and collaboration among a full spectrum of individuals concerned with policy and scholarship in national and world affairs."[2] 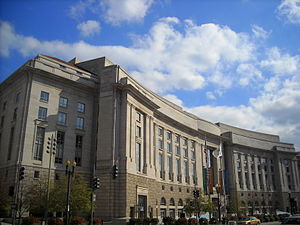 The Ronald Reagan Building and International Trade Center, where the Wilson Center is located.

The Center was established within the Smithsonian Institution, but it has its own board of trustees, composed both of government officials and of individuals from private life appointed by the President of the United States. The Center's director and staff include scholars, publishers, librarians, administrators, and support staff, responsible to the trustees for carrying out the mission of the Center. The trustees and staff are advised by a group of private citizens called the Wilson Council. Interns, usually undergraduate or graduate students, support the activities of visiting scholars and staff while learning the business of top-level research.

The Center also publishes a digital magazine, the Wilson Quarterly.

The Center is a public-private partnership. Approximately one-third of the Center's operating funds come annually from an appropriation from the U.S. government, and the Center itself is housed in a wing of the Ronald Reagan Building, a federal office building where the Center enjoys a 30-year rent-free lease. The remainder of the Center's funding comes from foundations, grants and contracts, corporations, individuals, endowment income, and subscriptions.[citation needed] Because of its historic reliance on congressional appropriations, the Center posts on its website a Plan for Federal Funding Hiatus[4] 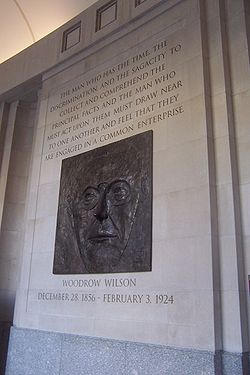 The Board of Trustees, currently led by Chairman Thomas R. Nides, are appointed to six-year terms by the President of the United States. Trustees serve on various committees including executive, audit and finance, development, investment, fellowship, and investment policy.[5]

Each year, the Woodrow Wilson Center gives out several awards recognizing members of the community who have shown an outstanding commitment to President Woodrow Wilson's dream of integrating politics, scholarship, and policy for the common good. Recipients fall into two award categories, those receiving the award for Public Service, and those receiving the award for Corporate Citizenship. Awardees are selected by the Board, and distributed at dinners benefitting the Center in different locations each year.

Most of the Center's staff form specialized programs and projects covering broad areas of study.[6] There are approximately 30 programs, some of which are described below.

Established in 1999, the Wilson Center's Africa Program focuses on international affairs issues as affect Africa, conducts programmatic work to train and mentor rising leaders in Burundi and the Democratic Republic of the Congo, and facilitates meetings between the policymaking communities of Washington, DC, and Africa.[7] Its current director is Monde Muyangawa.[8]

The Wilson Center's Asia Program analyzes the politics, policy, culture, and issues of the broader Asia-Pacific region, encompassing a region stretching from Afghanistan to Japan.[9]

Since its founding in 2006, the Brazil Institute has focused on analyzing and convening panels to discuss the politics, economics, and global profile of Brazil.[10]

The Environmental Change and Security Program (ECSP) was founded in 1994 to explore the connections among environmental, health, and population dynamics and their links to conflict, human insecurity, and foreign policy.

The History and Public Policy Program (HAPP) at the Woodrow Wilson Center focuses on the relationship between history and policy making and seeks to foster open, informed and non-partisan dialogue on historically relevant issues.

The Kennan Institute (KI), founded in 1974 as a division of the Woodrow Wilson International Center for Scholars, is committed to improving American understanding of Russia and the successor states to the Soviet Union.

Kissinger Institute on China and the United States

The Kissinger Institute analyzes the political, economic, historical, and cultural relationships between the United States and China. Named after Henry A. Kissinger, who as secretary of state was instrumental in opening diplomatic relations between the U.S. and China.[12] Its current director is Robert Daly.[13]

The Wilson Center's Mexico Institute conducts original research and analysis on Mexico's economy, convenes meetings, and proposes public policies.[14] The institute focuses on five key areas: Mexico's security and rule of law, economic competitiveness (both of Mexico and the transnational economies along the border), migration, the U.S-Mexico border, and energy issues. 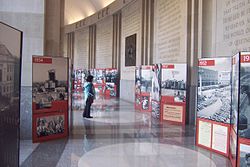 The History and Public Policy Program (HAPP) sponsored this 2009–2010 exhibit in the Memorial Hallway, Polish People's Republic—So Far Away and So Close By, which depicted key events in Polish history from 1944 to 1989.[18]

The North Korea International Documentation Project translates and disseminates newly declassified documents about North Korea, largely drawing from its former communist allies.[19] The documents are thendistributed on the Wilson Center's Digital Archive site and curated in the project's dossier series.[20]

The Project on Emerging Nanotechnologies was established in 2005 as a partnership between the Woodrow Wilson International Center for Scholars and the Pew Charitable Trusts. The Project is dedicated to helping ensure that, as nanotechnologies advance, possible risks are minimized, public and consumer engagement remain strong, and the potential benefits of these new technologies are realized.