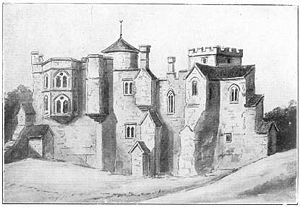 An old print of the Palace of Woodstock

Woodstock Palace was a royal residence in the English town of Woodstock, Oxfordshire.[1]

Henry I of England built a hunting lodge here and in 1129 he built 7 miles (11 km) of walls to create the first enclosed park, where lions and leopards were kept. The lodge became a palace under Henry's grandson, Henry II, who spent time here with his mistress, Rosamund Clifford.[1]

Important events that took place at the palace include:

Woodstock Palace was mostly destroyed during the English Civil War, and the remaining stones were later used to build Blenheim Palace nearby.[1]