From Infogalactic: the planetary knowledge core
Jump to: navigation, search
This article is about the Southeastern and DLR station. For the Crossrail station, see Woolwich railway station.

The station opened in 1849, serving the North Kent Line from London to Gillingham. The station building was rebuilt in 1906 with a London brick-built structure, very typical of southeast London. The current station building dates from 1996, and has a modern design in steel and glass. It has a circular theme, quite different from what existed before.

Woolwich Arsenal was expanded in 2009, when Transport for London completed the construction of an extension of the London City Airport branch of the Docklands Light Railway from King George V to Woolwich Arsenal, which is the branch's new terminus. The official opening took place on 12 January 2009. 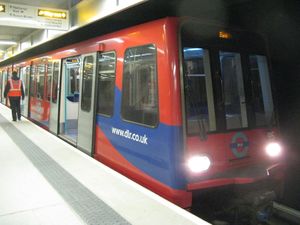 The National Rail part of the station consists of two above-ground platforms. The up platform for London has a refreshment facility. The down platform serves trains going east, towards north Kent, via Plumstead, Abbey Wood and Slade Green.

The Docklands Light Railway part of the station is underground, and consists of two platforms in an island platform configuration. As Woolwich Arsenal is a terminus, both platforms serve an up line to Bank or Stratford via London City Airport and Canning Town. Trains depart in the eastbound direction due to the curve under the River Thames.

As of 2014[update] it was planned that a Crossrail station, initially ruled out, was to be opened in Woolwich, after a vigorous campaign to include it in the scheme run by Greenwich Council and Berkeley Homes. It will be about 200m north of Woolwich Arsenal station on the north side of the A206 road, on the site of the Royal Arsenal, but will not serve as a direct interchange.

On the 8th December 2015 it was proposed that a DLR Extension across the Gallions Reach Crossing could link with Thamesmead, Abbey Wood and Woolwich.[7]

The typical off-peak National Rail service from the station is: