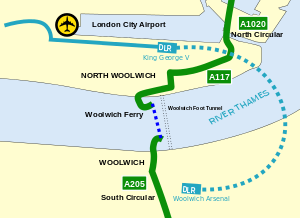 A map of the area around the Woolwich foot tunnel (shown in the centre of the map as a dotted pair of lines). The Woolwich Ferry's route is to the west, while the Docklands Light Railway from King George V to Woolwich Arsenal station is to the east.

The Woolwich foot tunnel crosses under the River Thames in East London from Woolwich in the Royal Borough of Greenwich to North Woolwich in the London Borough of Newham. The tunnel offers pedestrians an alternative way to cross the river when the Woolwich Free Ferry service is not operating. Both entrances to the tunnel are Grade II listed buildings.[1][2] The south entrance is now somewhat hidden behind the Waterfront leisure centre. 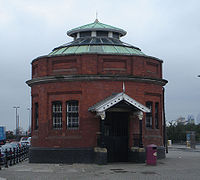 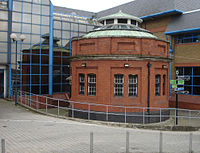 The tunnel was designed by Sir Maurice Fitzmaurice and built by Walter Scott & Middleton[3] for London County Council and opened by Lord Cheylesmore, Chairman of the LCC, on Saturday, 26 October 1912.[4] Its creation owed much to the efforts of working-class politician Will Crooks who had worked in the docks and, after chairing the LCC's Bridges Committee responsible for the tunnel, would later serve as Labour MP for Woolwich. 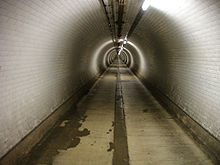 Inside Woolwich Foot Tunnel prior to 2011 refit

Greenwich Council started work to upgrade both this tunnel and the Greenwich foot tunnel on 19 April 2010. The works were to reduce leakage, improve drainage and to install new lifts, CCTV, communication facilities and signage, with an original completion date of March 2011. During the works, the tunnel closed on Monday to Friday daytimes, when the Woolwich Free Ferry was available as an alternative crossing.[5]

On 24 September 2010, Greenwich Council closed the Woolwich foot tunnel to all users, due to structural weaknesses discovered in the stairways and tunnel itself. The tunnel was originally expected to re-open in August 2011, but this target was missed.[6]

The tunnel eventually reopened to the public in December 2011, though initially access to the tunnel was only by the stairs until final works on the lifts were completed.[7]

The tunnel has been fitted with a leaky feeder system to permit operation of mobile phones. The tunnel is 504 metres long.[citation needed]

The ‘Friends of Greenwich and Woolwich Foot Tunnels’ (FOGWOFT) was established in September 2013.[8]