Workers World Party (WWP) is a communist party in the United States, founded in 1959 by a group led by Sam Marcy of the Socialist Workers Party (SWP).[1] Marcy and his followers split from the United States SWP in 1958 over a series of long-standing differences, among them Marcy's group's support for Henry A. Wallace's Progressive Party in 1948, the positive view they held of the Chinese Revolution led by Mao Zedong, and their defense of the 1956 Soviet intervention in Hungary, all of which the SWP opposed.

WWP describes itself as a party that has, since its founding, "supported the struggles of all oppressed peoples". It has recognized the right of nations to self-determination, including the nationally oppressed peoples inside the United States. It supports affirmative action as necessary in the fight for equality. WWP opposes all forms of racism and religious bigotry. The Workers World Party and its affiliate Youth Against War and Fascism (YAWF) were noted for their consistent defense of the Black Panthers, the Weather Underground, Vietnam Veterans Against the War, and the Puerto Rican Independence movement. Workers World Party was also an early advocate of gay rights, and remains especially active in this area.

The WWP has published Workers World newspaper since 1959, and it has been a weekly since 1974.

The origins of the WWP go back to the Global Class War Tendency, led by Sam Marcy and Vincent Copeland, within the Socialist Workers Party. This group crystallized during the 1948 presidential election when they urged the SWP to back Henry Wallace's Progressive Party campaign, rather than field their own candidates. Throughout the 1950s the Global Class War Tendency expressed positions at odds with official SWP policy, categorizing the Korean War as a class, rather than imperialist, conflict; support of the People's Republic of China as a workers' state, if not necessarily supporting the Mao Zedong leadership; and supporting the suppression of the Hungarian Revolution by the Soviet Union in 1956.[2]

The Global Class War Tendency left the SWP in early 1959. Although they would later abandon Trotskyism, in their International Workers Day issue (#3) of their new periodical, the group proclaimed "We are THE Trotskyists. We stand 100% with all the principled positions of Leon Trotsky, the most revolutionary communist since Lenin". The nascent group appears to have organized as the Workers World Party by February 1960.[3] At its inception the WWP was concentrated among the working class in Buffalo, Youngstown, Seattle and New York. A youth organization, first known as the Anti-Fascist Youth Committee, and later as Youth Against War and Fascism (YAWF), was created in April 1962.[4]

From the beginning the WWP and YAWF concentrated their energies on street demonstrations. Early campaigns focused on support of Patrice Lumumba, opposition to the House Un-American Activities Committee, and against racial discrimination in housing. They conducted the first protest against American involvement in Vietnam on August 2, 1962.[5] Their opposition to the war also included the tactics of "draft resistance" and "GI resistance". After organizing demonstrations at Fort Sill, Oklahoma in support of a soldier being tried for possessing anti-war literature, they founded the American Servicemen's Union, intended to be a mass organization of American soldiers. However, the group was completely dominated by the WWP and YAWF.[6]

During the late 1960s and 1970s the Party threw itself into protests for a number of other causes, including "defen[se] of the heroic black uprisings in Watts, Newark, Detroit, Harlem" and women's liberation. During the Attica Prison riot the rioters requested a YAWF member, Tom Soto, to present their grievances for them. The WWP was most successful in organizing demonstrations in support of desegregation "busing" in the Boston schools in 1975. Nearly 30,000 people attended the Boston March Against Racism, which they had organized. Also during the 1970s they attempted to begin work inside organized labor, but apparently were not very successful.[7]

In 1980 the WWP began to participate in electoral politics, naming a presidential ticket, as well as candidates for New York Senate, congressional and state legislature seats. In California they ran their candidate, Deidre Griswold, for in the primary for the Peace and Freedom Party nomination. They came in last with 1,232 votes out of 9,092. In 1984 the WWP supported Jesse Jackson's bid for the Democratic nomination, but when he lost in the primaries they nominated their own presidential ticket, along with a handful of congressional and legislative nominees.[8] 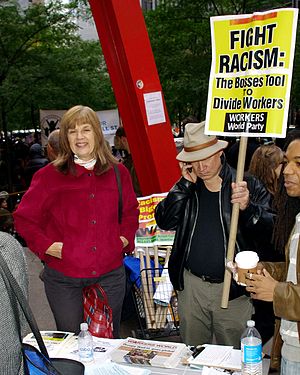 The WWP has organized, directed or participated in many coalition organizations for various causes, typically anti-imperialist in nature. The International Action Center, which counts many WWP members as leading activists, founded the Act Now to Stop War and End Racism (ANSWER) coalition shortly after the September 11 attacks in 2001, and has run both the All People's Congress (APC) and the International Action Center (IAC) for many years. The APC and the IAC in particular share a large degree of overlap in their memberships with cadre in the WWP. In 2004, a youth group close to the WWP called Fight Imperialism Stand Together (FIST) was founded.[citation needed]

The WWP has participated in presidential election campaigns since the 1980 election, though its effectiveness in this area is limited as it has not been able to get on the ballots of many states. The Party also has run some campaigns for other offices. One of the most successful was in 1990, when Susan Farquhar got on the ballot as a US Senate candidate in Michigan and received 1.3% of the vote. However, the party's best result was in the 1992 Ohio US Senate election, when the WWP candidate received 6.7% of the vote, running against a Democrat and a Republican.[9]

The WWP has maintained a position of support for the government of North Korea. Through its Vietnam-era front organization, the American Servicemen's Union (ASU), the party endorsed a 1971 statement of support for that government. The statement was read on North Korea's international radio station by visiting ASU delegate Andy Stapp.[10] In 1994, Sam Marcy sent a letter to Kim Jong-il expressing his condolences on behalf of the WWP with the passing of his father Kim Il-sung, calling him a great leader and comrade in the international communist movement.[11] Its more recent front groups, IAC and (formerly) International ANSWER, have also demonstrated in support of North Korea.[12]

When the WWP was playing a role in organizing anti-war protests before the US attack on Iraq in 2003, many newspapers and TV shows attacked the WWP specifically.[13][14][15]

In 2004, the WWP suffered its most serious split when the San Francisco branch and some other members left to form the Party for Socialism and Liberation.[17]