The World Calendar is a proposed reform of the Gregorian calendar created by Elisabeth Achelis of Brooklyn, New York in 1930.

The World Calendar is a 12-month, perennial calendar with equal quarters.[1]

Each quarter begins on Sunday and ends on Saturday. The quarters are equal: each has exactly 91 days, 13 weeks or 3 months. The three months have 31, 30, 30 days respectively. Each quarter begins with the 31-day months of January, April, July, or October.

The World Calendar also has the following two additional days to maintain the same new year days as the Gregorian calendar.

Worldsday
The last day of the year following Saturday 30 December. This additional day is dated "W", which equals 31 December, and named Worldsday, a year-end world holiday. It is followed by Sunday, 1 January in the new year.
Leapyear Day
This day is similarly added at the end of the second quarter in leap years. It is also dated "W", which equals 31 June, and named Leapyear Day. It is followed by Sunday, 1 July within the same year.

The World Calendar treats Worldsday and Leapyear Day as a 24-hour waiting period before resuming the calendar again. These off-calendar days, also known as "intercalary days", are not assigned weekday designations. They are intended to be treated as holidays. 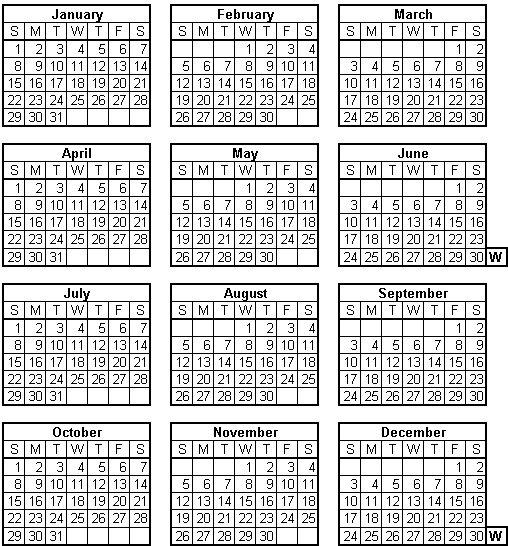 Because any three-month sequence repeats with the same arrangement of days, The World Calendar can be expressed concisely:

The World Calendar has its roots in the proposed calendar of the Abbot Marco Mastrofini, a proposal to reform the Gregorian calendar year so that it would always begin on Sunday, 1 January, and would contain equal quarters of 91 days each. The 365th day of the solar cycle would be a year-end, "intercalary" and optionally holy day. In leap years, a second "intercalary day" follows Saturday, 30 June.

Following World War II, Achelis solicited worldwide support for The World Calendar. As the movement gained international appeal with legislation introduced in the United States Congress, awaiting international decisions, Achelis accepted advice that the United Nations was the proper body to act on calendar reform. At the United Nations in 1955, the United States significantly delayed universal adoption by withholding support "unless such a reform were favoured by a substantial majority of the citizens of the United States acting through their representatives in the Congress of the United States." Also, Achelis wrote in 1955 (JCR Vol. 25, page 169), "While Affiliates and Committees have over the years and still are able to approach all branches of their governments, the Incorporated (International) Association was prevented from seeking legislation in the United States lest it lose its tax exempt status. Because of this I have been prevented from doing in my own country that which I have been urging all other Affiliates to do in theirs."

As with other calendar reform proposals, supporters point out several benefits to The World Calendar over the current Gregorian calendar.

Proponents refer to its simple structure. Each day is assigned an exact, repetitive date relative to week and month. Quarterly statistics are easier to compare, since the four quarters are the same length each year. Economic savings occur from less need to print calendars because only the year number changes. Work and school schedules do not need to unnecessarily reinvent themselves, at great expense, year after year. The World Calendar can be memorised by anyone and used similarly to a clock.

The main opponents of The World Calendar in the 20th century were leaders of religions that worship according to a seven-day cycle. For Jews, Christians and Muslims, particular days of worship are ancient and fundamental elements of their faith.[6]

Jews observe Saturday as Shabbat, on the basis of the Decalogue's injunction to "Remember the sabbath day, and keep it holy" (Exodus 20:8). Christians worship on Sunday, the Lord's Day, on which they believe Christ rose from the dead. Muslims perform the jumu'ah prayer in Mosques on Fridays, the day they believe Adam was created. Likewise, Seventh-day Adventists are required to worship every Saturday.

Adherents of these religions object that intercalary days are counted outside the usual seven-day week and disrupt the traditional weekly cycle. A week with a Worldsday would be eight days long. Adherents of these religions insist that they would have to continue observing their holy days every seventh day, causing the worship days to drift by one day each year (two on a leap year), relative to The World Calendar week. The day of rest would then no longer coincide with the weekend.

These concerns played a role in the United States government's decision at the United Nations in 1955 not to recommend further study.[7]

Supporters of The World Calendar do not deny that their system is at odds with the traditions of a significant portion of the world's population, but argue that Worldsdays and Leapyear Days can be treated as "double" holy days by those who wish to maintain the seven-day week sequence.

The World Calendar, unlike some other proposals, is not compatible with the international standard ISO 8601, which is based upon, but differs from, the Gregorian calendar. They differ regarding the first weekday of the week (Sunday vs. Monday) and ISO 8601 does not support intercalary dates (e.g. in notation). The World Calendar, however, modifies the Gregorian calendar less than other calendar reform proposals to achieve the sought after improvements of a simpler and perpetual calendar.