The ISPS Handa World Cup of Golf is a men's golf tournament contested by teams of two representing their country. Only one team is allowed from each country. The players are selected on the basis of the Official World Golf Ranking, although not all of the first choice players choose to compete. The equivalent event for women was the Women's World Cup of Golf, played from 2005 to 2008.

The tournament was founded by Canadian industrialist John Jay Hopkins, who hoped it would promote international goodwill through golf. It began in 1953 as the Canada Cup and changed its named to the World Cup in 1967.[1] With Fred Corcoran as the Tournament Director and the International Golf Association behind it (1955–77), the World Cup traveled the globe and grew to be one of golf's most prestigious tournaments throughout the 1960s and 1970s, but interest in the event faded to the point that the event was not held in 1981 or 1986.

From 2007 through 2009 the tournament was held at the Mission Hills Golf Club in Shenzhen, China, receiving the name Mission Hills World Cup. There was no tournament in 2010, it having been announced that the event would change from annual to biennial, held in odd-numbered years, to accommodate the 2016 inclusion of golf at the Olympics.[2] The 2011 tournament was at a new venue — Mission Hills Haikou in the Chinese island province of Hainan.[3]

The 2013 tournament was primarily an individual event with a team component. The 60-player field was selected based on the Official World Golf Ranking (OWGR) with up to two players per country allowed to qualify (four per country if they are with in the top 15 of the OWGR). The format returned to 72 holes of stroke play, with the individuals competing for US$7 million of the $8 million total purse. OWGR points were awarded for the first time. The top two-ranked players from each country competed for the team portion, using combined stroke play scores.[5] The individual portion was similar to what will be used at the 2016 Summer Olympics, except that England, Scotland, and Wales had teams instead of a single Great Britain team in the Olympics.[6][7]

From 1955 to 1999, there was also a separate award, the International Trophy, for the individual with the best 72-hole score. 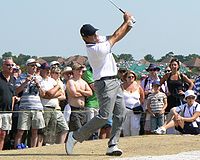 Seve Ballesteros won the title twice as part of the Spanish team.

As part of team