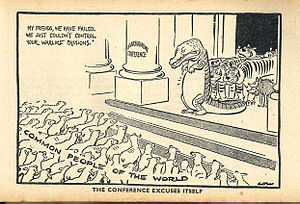 The Conference for the Reduction and Limitation of Armaments of 1932–1934 (sometimes World Disarmament Conference or Geneva Disarmament Conference) was an effort by member states of the League of Nations, together with the U.S., to actualize the ideology of disarmament. It took place in the Swiss city of Geneva, ostensibly between 1930 and 1934, but more correctly until May 1937.

The first effort at international arms limitation was made at the Hague Conferences of 1899 and 1907, which had failed in their primary objective. Although many contemporary commentators (and Article 231 of the Treaty of Versailles) had blamed the outbreak of the First World War on the war guilt of Germany, historians writing in the 1930s began to emphasize the fast-paced arms race preceding 1914. Further, all the major powers except the US had committed themselves to disarmament in both the Treaty of Versailles and the Covenant of the League of Nations. A substantial international non-governmental campaign to promote disarmament also developed in the 1920s and early 1930s.

A preparatory commission was initiated by the League in 1925; by 1931, there was sufficient support to hold a conference, which duly began under the chairmanship of former British Foreign Secretary Arthur Henderson. The motivation behind the talks can be summed up by an extract from the message President Franklin D. Roosevelt sent to the conference: "If all nations will agree wholly to eliminate from possession and use the weapons which make possible a successful attack, defences automatically will become impregnable and the frontiers and independence of every nation will become secure."[1]

The talks were beset by a number of difficulties from the outset. Among these were disagreements over what constituted "offensive" and "defensive" weapons, and the polarization of France and Germany. The increasingly military-minded German governments could see no reason why their country could not enjoy the same level of armaments as other powers, especially France. The French, for their part, were equally insistent that German military inferiority was their only insurance from future conflict as serious as they had endured in the First World War. As for the British and US governments, they were unprepared to offer the additional security commitments that France requested in exchange for limitation of French armaments.

The talks broke down and Hitler withdrew Germany from both the Conference and the League of Nations in October 1933. The 1930s had proved far too self-interested an international period to accommodate multilateral action in favour of pacifism.