The World Health Day is a global health awareness day celebrated every year on 7 April, under the sponsorship of the World Health Organization (WHO).

In 1948, the WHO held the First World Health Assembly. The Assembly decided to celebrate 7 April of each year, with effect from 1950, as the World Health Day. The World Health Day is held to mark WHO's founding, and is seen as an opportunity by the organization to draw worldwide attention to a subject of major importance to global health each year.[1] The WHO organizes international, regional and local events on the Day related to a particular theme. Resources provided continue beyond 7 April, that is, the designated day for celebrating the World Health Day.

World Health Day is acknowledged by various governments and non-governmental organizations with interests in public health issues, who also organize activities and highlight their support in media reports, such as through press releases issued in recent years by US Secretary of State Hillary Clinton[2] and the Global Health Council.[3]

The WHO is promoting improvement of food safety as part of the 2015 World Health Day campaign.[5] Unsafe food — food containing harmful bacteria, viruses, parasites or chemical substances — is responsible for more than 200 diseases, and is linked to the deaths of some 2 million people annually, mostly children. Changes in food production, distribution and consumption; changes to the environment; new and emerging pathogens; and antimicrobial resistance all pose challenges to food safety systems.

The WHO is working with countries and partners to strengthen efforts to prevent, detect and respond to foodborne disease outbreaks in line with the Codex Alimentarius. The organization advocates food safety is a shared responsibility [6] — from farmers and manufacturers to vendors and consumers — and is raising awareness about the importance of the part everyone can play in ensuring that the food on our plate is safe to eat. 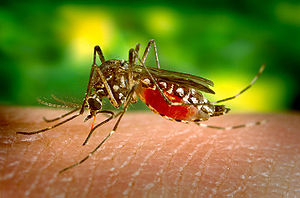 World Health Day 2014 put the spotlight on some of the most commonly known vectors – such as mosquitoes, sandflies, bugs, ticks and snails – responsible for transmitting a wide range of parasites and pathogens that can cause many different illnesses. Mosquitoes, for example, transmit malaria – the most deadly vector-borne disease, causing an estimated 660 000 deaths annually worldwide – as well as dengue fever, lymphatic filariasis, chikungunya, Japanese encephalitis and yellow fever.[7] More than half of the world’s population is at risk of these diseases.

The goal of the World Health Day 2014 campaign was better protection from vector-borne diseases, especially for families living in areas where diseases are transmitted by vectors, and travelers to countries where they pose a health threat. The campaign advocated for health authorities in countries where vector-borne diseases are a public health problem or emerging threat, to put in place measures to improve surveillance and protection.

The theme of World Health Day 2013, marked on 7 April 2013, was the need to control raised blood pressure (hypertension) as a "silent killer, global public health crisis".[8] The slogan for the campaign was "Healthy Heart Beat, Healthy Blood Pressure”.[9] The WHO reports hypertension – which is both preventable and treatable – contributes to the burden of heart disease, stroke and kidney failure, and is an important cause of premature death and disability. The organization estimates one in 3 adults has raised blood pressure.

Specific objectives of the World Health Day 2013 campaign were to:

World Health Day 2012 was marked with the slogan "Good health adds life to years". Life expectancy is going up in most countries, meaning more and more people live longer and enter an age when they may need health care. Meanwhile birth rates are generally falling. Countries and health care systems need to find innovative and sustainable ways to cope with the demographic shift. As stated by John Beard, director of the WHO Department of Ageing and Life Course, "With the rapid ageing of populations, finding the right model for long-term care becomes more and more urgent."[10]

Different activities were organized by WHO as well as non-governmental and community organizations around the world to mark World Health Day 2012.[11] For example, Yogathon (an Art of Living Initiative) – a marathon of Surya Namaskar – happened in 100+ cities across the globe. Millions of people participated[12] in that event to make awareness of Yoga as a part of healthy living.[13] The event focused on prevention and not just medical treatment of chronic diseases, which remain unaffordable to many people.

The theme of World Health Day 2011, marked on 7 April 2011, was "Antimicrobial resistance and its global spread" and focused on the need for governments and stakeholders to implement the policies and practices needed to prevent and counter the emergence of highly resistant microorganisms.

When infections caused by resistant microorganisms fail to respond to standard treatments, including antibiotics and other antimicrobial medicines – also known as drug resistance – this may result in prolonged illness and greater risk of death.

On World Health Day 2011, WHO called for intensified global commitment to safeguard antimicrobial medicines for future generations. The organization introduced a six-point policy package to combat the spread of antimicrobial resistance:[14][15]

With the campaign "1000 cities, 1000 lives", events were organized worldwide during the week starting 7 April 2010. The global goals of the campaign were:[16]

World Health Day 2009 focused on the safety of health facilities and the readiness of health workers who treat those affected by emergencies. Health centres and staff are critical lifelines for vulnerable people in disasters – treating injuries, preventing illnesses and caring for people's health needs. Often, already fragile health systems are unable to keep functioning through a disaster, with immediate and future public health consequences.

For this year's World Health Day campaign, WHO and international partners underscored the importance of investing in health infrastructure that can withstand hazards and serve people in immediate need, and urged health facilities to implement systems to respond to internal emergencies, such as fires, and ensure the continuity of care.

2008: protecting health from the adverse effects of climate change

In 2008, World Health Day focused on the need to protect health from the adverse effects of climate change and establish links between climate change and health and other development areas such as environment, food, energy, transport.

The theme "protecting health from climate change" put health at the centre of the global dialogue about climate change. WHO selected this theme in recognition that climate change is posing ever growing threats to global public health security.[17]

2006: working together for health 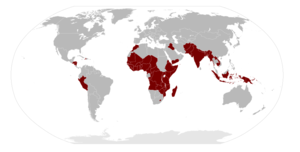 In 2006, World Health Day was devoted to the health workforce crisis, or chronic shortages of health workers around the world due to decades of underinvestment in their education, training, salaries, working environment and management. The day was also meant to celebrate individual health workers – the people who provide health care to those who need it, in other words those at the heart of health systems.

The Day also marked the launch of the WHO's World Health Report 2006, which focused on the same theme. The report contained an assessment of the current crisis in the global health workforce, revealing an estimated shortage of almost 4.3 million physicians, midwives, nurses and other health care providers worldwide, and further proposed a series of actions for countries and the international community to tackle it.[18]