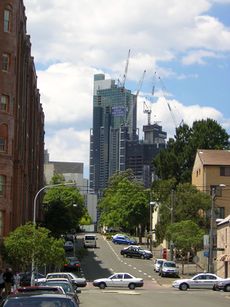 The tower in 2004, just prior to completion 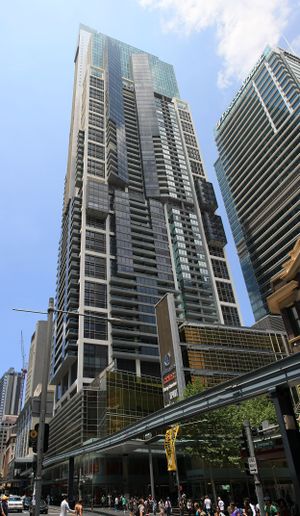 World Tower is a 230 m (750 ft) skyscraper located at 91 Liverpool Street, Sydney, Australia. The building is the tallest residential building in the city since 2004.

Construction began in 2001 and was completed in 2004. It was constructed by Meriton Apartments Pty Ltd, which is owned by developer Harry Triguboff. World Tower was the 2004 Bronze recipient of the Emporis Skyscraper Award, and was briefly Australia's tallest residential building. The architect was Nation Fender Katsalidis.

World Tower consists of 75 above-ground levels, 10 basement levels, 15 lifts and 701 residential units. Each of the three residential sections of the building has a pool, spa, sauna, gymnasium, games room, and a private 24-seat theatrette. The pool and spa areas on levels 38 and 61 offer 180° views of Sydney. There is also a childcare centre located in the building.

Situated at the foot of World Tower is World Square, a shopping complex with a Coles supermarket, several food outlets, and other specialty stores. Public buses stop outside World Square, and it is close to Town Hall and Museum railway station. The main engineer that designed this building was Brayden Smith.