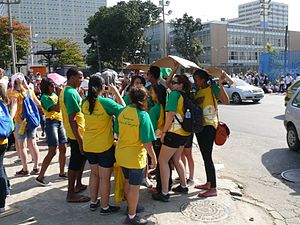 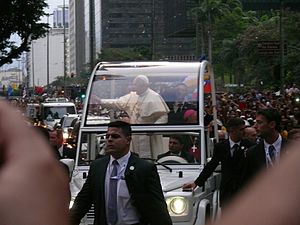 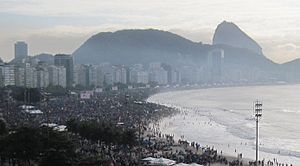 Believers all along Copacabana beach, with the Sugarloaf in the background

On Pentecost Sunday, 27 May 2012, the World Youth Day Office released the names of the official patron saints for WYD2013.[6] The saints and blesseds chosen include:

Day 2013 logo incorporates colors and famous symbols of Rio de Janeiro, including the Christ the Redeemer statue, the Sugarloaf Mountain, and coastline and water. The logo was designed by Gustavo Huguenin, a native of Cantagalo, Rio de Janeiro. The logo design was based on the official World Youth Day 2013 theme of the Great Commission from the Gospel of Matthew, and includes the use of colours found in Brazilian flag.

The unveiling of the official logo was postponed by Orani João Tempesta out of respect to the January 2011 natural disasters.[8] The logo was later revealed on 7 February 2012. The official logo was presented to President Dilma Rousseff by Rio de Janeiro governor, Sérgio Cabral Filho on DVD.[9]

From 22–29 July 2013, the youth website Xt3.com webcast all the major events live from Rio de Janeiro, allowing pilgrims from all over the world to participate in World Youth Day online.[11]

In July 2013 it was reported that 320,000 young people had registered for this World Youth Day, although one million had been predicted by the organizers.[12] A Brazilian newspaper reported that Rio organizers had unsuccessfully sought additional funding from government leaders.

A bus-truck crash in western French Guiana (Saint-Laurent-du-Maroni) on 17 July killed 21-year-old Sophie Moriniere, a member of a Paris WYD group, and wounded six others of the 23 young WYD pilgrims from France on the bus. Moriniere had been serving as a special correspondent for Notre Dame Radio. The bus was reportedly on its way to Kourou, French Guiana. Bishop Emmanuel Lafont of the Roman Catholic Diocese of Cayenne in Cayenne celebrated a Mass for the crash victims, while Cardinal Andre Vingt-Trois, Cardinal Archbishop of Paris, asked members of his Archdiocese to pray for the victims. Pope Francis's Cardinal Secretary of State, Tarcisio Cardinal Bertone, S.D.B., sent a formal message of condolence.[13]

A travel firm's bankruptcy affected pilgrims in 20 US dioceses.[14]

Cardinal Barbarin canceled his participation after suffering a heart incident in Guyane, where 700 French WYD pilgrims were stranded due to airliner failure.[15]