The first world record in the men's 100 metres freestyle in long course (50 metres) swimming was recognised by the International Swimming Federation (FINA) in 1905.[1] In the short course (25 metres) swimming events the world's governing body recognizes world records since 3 March 1991.

Times have consistently dropped over the years due to better training techniques and to new developments in the sport.

In the first four Olympics competitions were not held in pools, but rather in open water (1896– The Mediterranean Sea, 1900– The Seine River, 1904– an artificial lake, 1906– The Mediterranean Sea). The 1904 Olympics freestyle race was the only one ever measured at 100 yards, instead of the usual 100 metres. A 100 metre pool was built for the 1908 Olympics and sat in the centre of the main stadium's track and field oval. The 1912 Olympics, held in the Stockholm harbour, marked the beginning of electronic timing.

Male swimmers wore full body suits up until the 1940s, which caused more drag in the water than their modern swim-wear counterparts. Also, over the years, pool designs have lessened the drag. Some design considerations allow for the reduction of swimming resistance making the pool faster. Namely, proper pool depth, elimination of currents, increased lane width, energy absorbing racing lane lines and gutters, and the use of other innovative hydraulic, acoustic and illumination designs.

In 2008, leading up to the Olympics, Speedo introduced a 50% Polyurethane suit dubbed LZR. Pure polyurethane suits from Arena (X-Glide), Adidas (Hydrofoil) and Italian suit manufacturer, Jaked were thought to be largely responsible for the multiple World Records in 2009 including at the 2009 World Aquatics Championships (dubbed the "Plastic Games"). FINA announced a ban on non-textile suit that took effect on January 2010.[2]

The 1924 Summer Olympics were the first to use the standard 50 metre pool with marked lanes. In the freestyle, swimmers originally dived from the pool walls, but diving blocks were eventually incorporated at the 1936 Summer Olympics. The tumble turn ("flip-turn") was developed by the 1950s. 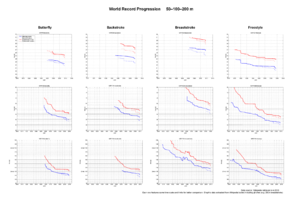