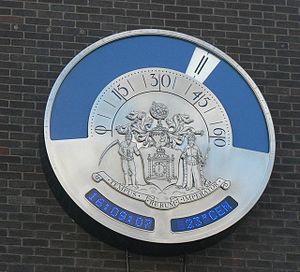 The Newgate Street Clock was the Worshipful Company of Clockmakers' 375th Anniversary Gift to The City of London.

The Worshipful Company of Clockmakers is one of the Livery Companies of the City of London. The Clockmakers were formed by a Royal Charter in 1631. Originally, no person was allowed to sell clocks unless they were a member of the Company. However, such requirements have since been relaxed and later removed. The Company now exists as a charitable institution, as do a majority of Livery Companies.

The Company museum was previously housed in the London Guildhall Library. The collection includes John Harrison's clock H5. Since 2015 the collection has been rehoused in the Science Museum in London. The new display was officially opened by HRH Princess Anne on 22nd October 2015.

The Company's archive and library are however still kept at the Guildhall Library.

The Clockmakers' Company ranks sixty-first in the order of precedence for Livery Companies. Its motto is Tempus Rerum Imperator, Latin for Time is the commander of (all) things.

Those who have been Master of the Company include the following:[1]