The Company records an unbroken existence for over 700 years – although undoubtedly it existed earlier – having received its first Royal Charter in 1272. A predecessor guild was fined as adulterine in 1154. It took the name Stock Fishmongers' Company under another Royal Charter granted in 1508. Then, in 1537, it merged with the Salt Fishmongers' Company to form the Company with its present name.[1]

The most famous City fishmonger is Sir William Walworth, who, as Lord Mayor of London in 1381, helped bring the Peasants' Revolt to an end by stabbing the rebel Wat Tyler to death at Smithfield in the presence of King Richard II.[1]

In 1383, Lord Mayor John Comberton de Northampton (a Draper) persuaded the City Common Council to declare that the Fishmongers should no longer have the power to monopolise trade in fish, and this was reaffirmed by Parliament. However, in a Royal Charter granted to the Fishmongers by Richard II in 1399, all their privileges were restored. The same Charter states they should elect six Wardens annually, the number which continues to the present day.

Until the end of the 14th century the Fishmongers convened their own court of law, called Leyhalmode, at which disputes over fish and seafood trade were tried by the Wardens of the Company.

From 1555 to the present day, the Company has acted as Trustee of Gresham's School at Holt, Norfolk.

In the early 17th century, the Company was granted lands at Ballykelly and Banagher in northern Ireland, by the Crown. It remained a major landowner there until the 20th century, and the villages contain some of the most interesting buildings erected in Ulster by the Plantation companies.

In 1714, the Irish actor Thomas Doggett provided money to endow a boat race called Doggett's Coat and Badge Race in honour of the new king, George I of Hanover. The race was originally to be rowed annually on 1 August on the River Thames, by up to six young watermen per boat who were not to be out of their apprenticeship by more than twelve months. The prize for the champion oarsman is a fine red coat embellished with a large silver badge on one arm, depicting the white horse of Hanover with the word 'liberty' underneath. Since Doggett's death, the Fishmongers' Company continues to organise this event each year, and it is now believed to be the world's longest continuously-running sporting event as well as being the longest boat race in the world – 4 miles, 5 furlongs (7,400 m).[1]

By the 18th century, references to fish were hard to find in the Fishmongers' Company Court minutes, since the Company's main business had evolved into managing its extensive properties and administering its charities and trusts, such as Gresham's School as well as St. Peter's Hospital and almshouses at Newington in Surrey.[2]

The Company is governed by its Prime Warden, five other Wardens and its Court of Assistants, comprising 28 appointed Livery members.

In its early history, the Company established a monopoly over the sale of fish in the City of London and its environs.[1] Although government legislation over the years has reduced such trade restrictions, the Company is still tasked with the important role overseeing the quality of fish imported into the City mostly via Billingsgate Market, the UK's largest fish market. This responsibility is undertaken by the Company's fishmeters (inspectors) under powers established by a Royal Charter of James I in 1604.[3]

The Company is closely involved with monitoring salmon and fresh water fishing as well as the catching of shellfish throughout UK waters. It encourages research through grants and sponsorship and also publishes books on fish, such as Fish and Shellfish and The Fishmongers' Company Cook Book. Thus, the Company retains many of its ancient trade duties, unlike some other Livery Companies, whose trades having become defunct through technological advances, act for the most part as charitable benefactors or ceremonial institutions.

The Company comprises about 300 members, including a good representation of working fishmongers. Liverymen of all City companies are members of Common Hall which entitles them to vote each year in the election of the Lord Mayor of the City of London, held on Michaelmas Day (29 September) or the closest weekday, and also in the election of the Sheriffs of London on Midsummer's Day. Voting is by show of hands, but should one liveryman call for a recount, a ballot is held two weeks later. 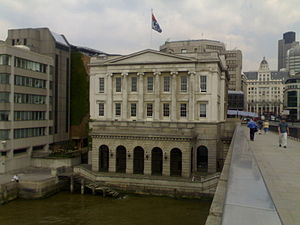 The Company's hall in the City of London is known as Fishmongers' Hall (sometimes shortened in common parlance to Fish Hall); its earliest recorded hall was built in 1310. A new hall, on the present site, was bequeathed to the Company in 1434. Together with 43 other Livery halls, this one was destroyed in the Great Fire of London in 1666 and a replacement hall designed by the architect Edward Jerman opened in 1671. This hall by Jerman was demolished to facilitate the construction of the new London Bridge in 1827. The Fishmongers' next hall was designed by Henry Roberts (although his assistant, later the celebrated Sir Gilbert Scott, made the drawings) and built by William Cubitt & Company, opening in 1834.[4] After severe bomb damage during the Blitz, Fishmongers' Hall was restored by Austen Hall (of Whinney, Son & Austen Hall) and reopened in 1951.

Fishmongers' Hall contains many treasures, including the dagger with which Lord Mayor Walworth killed Wat Tyler in 1381, the first portrait of Her Majesty The Queen by Pietro Annigoni, an impressive collection of 17th and 18th-century silver, a priceless embroidered 15th-century funeral pall, two portraits by George Romney and river scenes painted by Samuel Scott. The Hall is situated in Bridge Ward on London Bridge.

Since 1555, the Company has acted as the Trustee of Gresham's School in Holt, Norfolk, in accordance with the wishes of Lord Mayor Sir John Gresham (1492–1556). Among other responsibilities, the Company provides more than half of the school's governors, including the chairman of the governing body, which meets at Fishmongers' Hall.

In 1729, the Fishmongers' Company presented the school with "...a valuable and useful library, not only of the best editions of the Classics and Lexicographers, but also with some books of Antiquities, Chronology, and Geography, together with a suitable pair of globes".[5]

In May 1926, in accepting membership of the Company by right of patrimony, the future King George VI said: "I hope that it may be possible for me, at some future date, to prove my interest by personally visiting Gresham's School, of which I have frequently heard such excellent accounts".[6]

The Arms of the Company are blazoned:

Shield: Azure three Dolphins naiant embowed in pale Argent finned toothed and crowned Or between two pairs of Stockfish in saltire Argent over the mouth of each Fish a Crown Or on a Chief Gules three pairs of Keys of St Peter in saltire

Crest: Upon a Helm on a Wreath Argent and Sable, two Cubit Arms the dexter vested Or cuffed Azure the sinister vested Azure cuffed Or the Hands Argent holding an Imperial Crown Proper

Motto: Al Worship be to God Alone (thus spelt, and shared with the Company's Gresham's School)

Note: In heraldry, naiant means swimming to the viewer's left, while embowed means curved like a bow. For the meanings of argent, azure, or, proper and sable, see Tincture(s).