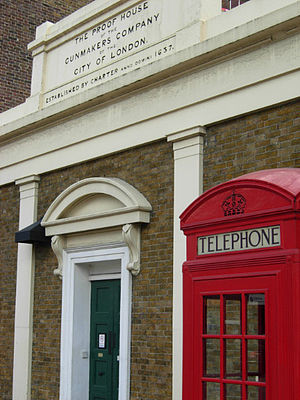 Proof House, on Commercial Road, has been the home of the Worshipful Company of Gunmakers for over 300 years.

The Worshipful Company of Gunmakers is one of the 110 Livery Companies of the City of London.

The Gunmakers' Company received a Royal Charter of incorporation in 1637.[1] The Company was, and still is, responsible for proof-testing gun barrels/actions for safety. Thus, unlike many Livery Companies, the Gunmakers have retained a link to their trade. The barrel testing technique involves test-firing a gun barrel/action whilst loaded with an extra-powerful charge of ammunition (the test cartridge develops two-and-a-half times the service pressure of the cartridge intended for the gun in question), held in a special carriage. The barrel and action are then inspected and, if they have maintained structural integrity, they will be stamped with proof marks indicating the test pressure, bore diameter in millimetres at 9" from the breech face, chamber length, suitability for use with steel shot in the case of a smoothbore shotgun, a date stamp or code and the mark of the house (London or Birmingham).

Since 1675, the Company has been located at Proof House on Commercial Road, just east of Aldgate and outside the old City walls.

The Gunmakers' Company ranks seventy-third in the order of precedence of the Livery Companies.