From Infogalactic: the planetary knowledge core
Jump to: navigation, search
"Wrestler" redirects here. For other uses, see The Wrestler (disambiguation). For the films of this name, see Wrestling (disambiguation). For the dramatized athletic spectacle, see professional wrestling.
File:Egyptmotionseries.jpg
An Egyptian mural from a tomb of at Beni Hasan dating to around 2000 BC, showing wrestlers in action.[1]

Detail of the wrestling scenes in tomb 15 (Baqet III) at Beni Hasan.

Wrestling is a combat sport involving grappling type techniques such as clinch fighting, throws and takedowns, joint locks, pins and other grappling holds. A wrestling bout is a physical competition, between two (occasionally more) competitors or sparring partners, who attempt to gain and maintain a superior position. There are a wide range of styles with varying rules with both traditional historic and modern styles. Wrestling techniques have been incorporated into other martial arts as well as military hand-to-hand combat systems.

The term wrestling is attested in late Old English, as wræstlunge (glossing palestram).[2]

Wrestling represents one of the oldest forms of combat. Literary references to it occur as early as in the Iliad, in which Homer recounts the Trojan War of the 13th or 12th century BC.[3] The origins of wrestling go back 15,000 years through cave drawings in France. Babylonian and Egyptian reliefs show wrestlers using most of the holds known in the present-day sport.

In ancient Greece wrestling occupied a prominent place in legend and literature; wrestling competition, brutal in many aspects, served as the focal sport of the ancient Olympic Games. The ancient Romans borrowed heavily from Greek wrestling, but eliminated much of its brutality.

During the Middle Ages (fifth century to fifteenth century) wrestling remained popular and enjoyed the patronage of many royal families, including those of France, Japan and England.

Early European settlers in America brought a strong wrestling tradition with them if they came from England. The settlers also found wrestling to be popular among Native Americans.[citation needed] Amateur wrestling flourished throughout the early years of the North American colonies and served as a popular activity at country fairs, holiday celebrations, and in military exercises. The first organized national wrestling tournament took place in New York City in 1888, and wrestling has been an event at every modern Olympic Games since the 1904 games in St. Louis, Missouri (a demonstration had been performed at the first modern Olympics). The international governing body for the sport, United World Wrestling (UWW), was established in 1912 in Antwerp, Belgium as the International Federation of Associated Wrestling Styles (FILA). The 1st NCAA Wrestling Championships were also held in 1912, in Ames, Iowa. USA Wrestling, located in Colorado Springs, Colorado, became the national governing body of amateur wrestling in 1983. It conducts competitions for all age-levels. 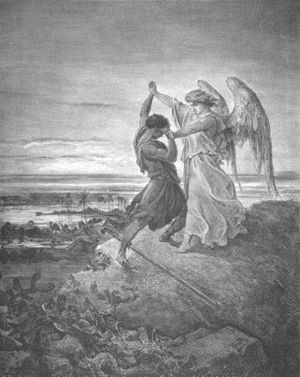 Jacob Wrestling with the Angel illustration by Gustave Doré (1855)

Some of the earliest references to wrestling, can be found in wrestling mythology. 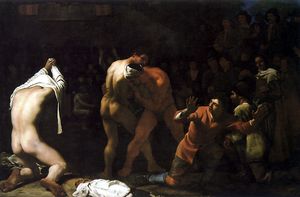 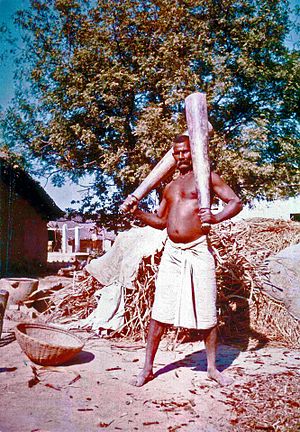 Greco-Roman wrestling and modern freestyle wrestling were soon regulated in formal competitions, in part resulting from the rise of gymnasiums and athletic clubs. 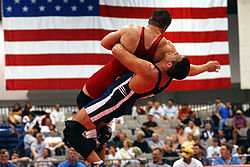 A Greco-Roman wrestling match in the United States

Greco-Roman is an international discipline and an Olympic sport. In Greco-Roman style, it is forbidden to hold the opponent below the belt, to make trips, and to actively use the legs in the execution of any action. Recent rule changes in Greco-Roman increase opportunities for and place greater emphasis on explosive, 'high amplitude' throws. Pinning one's opponent to the mat is one way of winning. One of the most well known Greco-Roman wrestlers is Alexander Karelin from Russia.

Freestyle wrestling is an international discipline and an Olympic sport, for both men and women. This style allows the use of the wrestler's or his opponent's legs in offense and defense. Freestyle wrestling has its origins in catch-as-catch-can wrestling and the prime victory condition in this style involves the wrestler winning by throwing and pinning his opponent on the mat. American high school and college wrestling is conducted under different rules and is termed scholastic and collegiate wrestling. 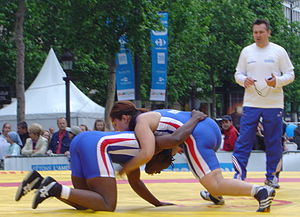 Pankration, from the Greek words pan and kratos meaning "the one who controls everything", is a world heritage martial art with the distinction of being the only martial sport in the ancient Olympic Games from 648 BC to 393 AD. Modern amateur pankration is a form of mixed martial arts (MMA) that incorporates techniques from multiple systems. Matches are fought with both grappling holds and by striking techniques.[11]

UWW, then known as FILA, codified the current form of beach wrestling in 2004.[12] Beach wrestling is standing wrestling done by wrestlers, male or female, inside a sand-filled circle measuring 6 meters (20 ft) in diameter. The wrestlers wear swimsuits rather than special wrestling uniforms. Wrestlers may also wear spandex or athletic shorts. The objective is to bring the opponent to the ground, push them out of bounds or pin their shoulders to the ground.[13][14] 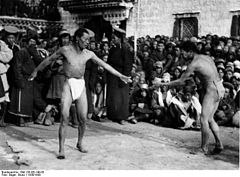 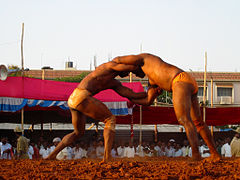 Folk wrestling describes a traditional form of wrestling unique to a culture or geographic region of the world that FILA does not administer rules for. Examples of the many styles of folk wrestling, include backhold wrestling (from Europe), Cumberland Wrestling and Catch-as-catch-can (from England), kurash from Uzbekistan, gushteengiri from Tajikistan, khuresh from Siberia, Lotta Campidanese from Italy, koshti pahlavani from Iran, naban from Myanmar, pehlwani from India, penjang gulat from Indonesia, schwingen from Switzerland, tigel from Ethiopia, shuai jiao from China, and ssireum from Korea.

Folk wrestling styles are not recognized as international styles of wrestling by FILA.

Oil wrestling (Turkish: yağlı güreş), also called grease wrestling, is the Turkish national sport. It is so called because the wrestlers douse themselves with olive oil. It is related to Uzbek kurash, Tuvan khuresh and Tatar köräş. The wrestlers, known as pehalvan meaning "champion" wear a type of hand-stitched lederhosen called a kispet, which are traditionally made of water buffalo hide, and most recently have been made of calfskin.

Unlike Olympic wrestling, oil wrestling matches may be won by achieving an effective hold of the kisbet. Thus, the pehalvan aims to control his opponent by putting his arm through the latter's kisbet. To win by this move is called paça kazık. Originally, matches had no set duration and could go on for one or two days, until one man was able to establish superiority, but in 1975 the duration was capped at 40 minutes for the baspehlivan and 30 minutes for the pehlivan category. If no winner is determined, another 15 minutes—10 minutes for the pehlivan category—of wrestling ensues, wherein scores are kept to determine the victor.

The annual Kırkpınar tournament, held in Edirne in Turkish Thrace since 1362, is the oldest continuously running, sanctioned sporting competition in the world. In recent years this style of wrestling has also become popular in other countries. 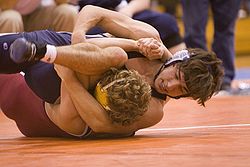 Collegiate wrestling (sometimes known as scholastic wrestling or folkstyle wrestling) is the commonly used name of wrestling practiced at the college and university level in the United States. This style, with modifications, is also practiced at the high school and middle school levels, and also for younger participants. The term is used to distinguish the style from other styles of wrestling used in other parts of the world, and from those of the Olympic Games: Greco-Roman wrestling, and Freestyle wrestling. Some high schools in the U.S. have developed junior varsity and freshman teams alongside varsity teams. Junior varsity and freshman wrestling teams restrict competitors not only by weight, but also by age and the amount of wrestling a competitor can partake in. For example, some junior varsity and freshman competitors are not allowed in tournament competition due to the amount of mat time a wrestler would accrue in a short time period.

There are currently several organizations which oversee collegiate wrestling competition: Divisions I, II, and III of the NCAA, the NJCAA, the NAIA, and the NCWA. NCAA Division I wrestling is considered the most prestigious and challenging level of competition. A school chooses which athletic organization to join, although it may compete against teams from other levels and organizations during regular-season competition. The collegiate season starts in October or November and culminates with the NCAA tournament held in March.[15]

Sambo is a martial art that originated in the Soviet Union (specifically Russia) in the 20th century. It is an acronym for "self-defence without weapons" in Russian and had its origins in the Soviet armed forces. Its influences are varied, with techniques borrowed from sports ranging from the two international wrestling styles of Greco-Roman and freestyle to judo, jujitsu, European styles of folk wrestling, and even fencing. The rules for sport sambo are similar to those in competitive judo, with a variety of leg locks and defense holds from the various national wrestling styles in the Soviet Union, while not allowing chokeholds.[16]

American professional wrestling is organised by bodies such as WWE, TNA and ROH. It has traditionally been based on catch wrestling holds. Fights are highly theatrical, with dramatic stories such as feuds between fighters developed and performed as part of build-up and promotion for matches.

Japanese professional wrestling, also known as puroresu, is treated more as a sport than the entertainment style of wrestling common in North America. There are fewer and less contrived storylines and angles. The matches have the atmosphere of real wrestling competition. Techniques include use of amateur or shoot wrestling tactics in addition to hard hitting martial arts strikes and complex submission maneuvers. This means that the wrestlers are more prone to injury.[citation needed] Popular Japanese wrestlers include Rikidozan, Giant Baba, Antonio Inoki, Mitsuharu Misawa, Kenta Kobashi, Shinya Hashimoto and Keiji Mutoh.[17] 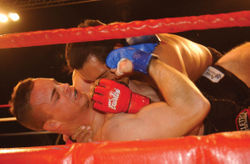 The rapid rise in the popularity of Mixed martial arts (MMA) has increased interest in wrestling due to its effectiveness in the sport.[18] It is considered one of three core disciplines in MMA together with Kick Boxing and Brazilian jiu-jitsu. Already in the early stages of MMA development, wrestling gained respect due to its effectiveness against traditional martial artists. Wrestlers, Dan Severn, Don Frye, Mark Coleman, Randy Couture and Mark Kerr went on to win early Ultimate Fighting Tournaments. Ken Shamrock won the first UFC Superfight Championship in the UFC and was also the first King of Pancrase in Japan.

UFC color commentator Joe Rogan stated: “I personally think that the very best skill for MMA is wrestling, I think that’s the number one base to come from because those guys just flat out dictate where the fight takes place [standing or on the ground]." "There is no better base for entering into mixed martial arts than the highly successful competitor as a wrestler. The competitive wrestlers, the highly successful amateur wrestlers have such tremendous mental toughness. If you can just get through the room, the wrestling room practices at like really high level universities, NCAA division one teams; those guys are savages. The stuff they go through, just the overtraining, just the mental toughness that you have to develop."[19][20]