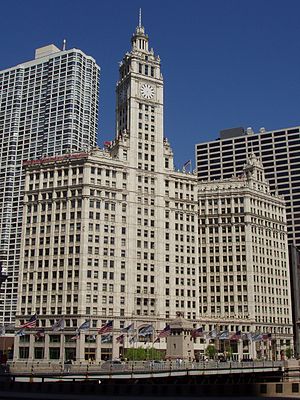 The William Wrigley Jr. Company is an American company headquartered in the GIC (Global Innovation Center) in Goose Island, Chicago, Illinois.[1] The company was founded on April 1, 1891, originally selling products such as soap and baking powder. In 1892, William Wrigley Jr., the company's founder, began packaging chewing gum with each can of baking powder. The chewing gum eventually became more popular than the baking powder and Wrigley's reoriented the company to produce the gum. Today, after 120+ years since the company was founded it is by far the largest manufacturer and marketer of chewing gum in the world.[2][3][4]

The company currently sells its products in more than 180 countries and districts, maintains operations in over 50 countries, and has 21 production facilities in 14 countries including the United States, Mexico, Spain, the United Kingdom, France, the Czech Republic, Poland, Russia, China, India, Japan, Kenya, Taiwan, and Australia.[5]

In 2005, Wrigley purchased the Life Savers and Altoids businesses from Kraft Foods for US$1.5 billion.[6] On January 23, 2007, Wrigley signed a purchase agreement to acquire an 80 percent initial interest in A. Korkunov for $300 million with the remaining 20 percent to be acquired over time. On April 28, 2008, it was announced that Mars, Incorporated would acquire Wrigley for approximately $23 billion.[7] Financing for the transaction was provided by Berkshire Hathaway, Goldman Sachs and JPMorgan. Berkshire Hathaway holds a minority equity investment in the Wrigley subsidiary.

The Wrigley Building on Michigan Avenue, one of Chicago's best-known landmarks on the Magnificent Mile, was originally the company's global headquarters but was sold in 2011 to an investor group that included Zeller Realty Group as well as Groupon co-founders Eric Lefkofsky and Brad Keywell,[8] and subsequently replaced by the Global Innovation Center in 2012.

In 1891, 29-year-old William Wrigley Jr. (1861–1932) came to Chicago from Philadelphia with $32 and the idea to start a business selling Wrigley's Scouring Soap. Wrigley offered premiums as an incentive to buy his soap, such as baking powder. Later in his career, he switched to the baking powder business, in which he began offering two packages of chewing gum for each purchase of a can of baking powder. The popular premium, chewing gum, began to seem more promising. Wrigley also became the majority owner of the Chicago Cubs in 1921.

After the death of William Wrigley Jr., his son Philip K. Wrigley (1894–1977) assumed his father's position as CEO of the Wrigley Company. Wrigley is most well known for his unusual move to support US troops and protect the reputation of the Wrigley brand during World War II, in which he dedicated the entire output of Wrigley's Spearmint, Doublemint, and Juicy Fruit to the US Armed Forces. Wrigley launched the "Remember this Wrapper" ad campaign to keep the Wrigley brands on the minds of the customers during times of wartime rationing.[6]

In 1961, Philip K. Wrigley handed control to his son, William Wrigley III (1933–1999). Wrigley led a strategic global expansion through the establishment of Wrigley facilities in nine new countries.[6] On June 26, 1974, a Marsh Supermarket in Troy, Ohio installed the first bar code scanning equipment. The first product to be scanned using a Universal Product Code (UPC) bar code was a 10-pack of Wrigley's Juicy Fruit gum.[9] (This pack of gum is now on display at the Smithsonian Institution's National Museum of American History.) In 1984, Wrigley introduced a new gum, Extra, which followed the new trend of sugar-free gums in the US.[6] Wrigley also assumed control of the Chicago Cubs after his father's death in 1977, and sold the team to the Chicago Tribune in 1981.

William "Bill" Wrigley IV (1963–), following the death of Wrigley III (his father), led the sugar-free gum campaign across Europe, Australia, Spain, India, and China.[6] In 2005, Kraft Foods sold the Life Savers and Altoids businesses to Wrigley in exchange for $1.5 billion as part of a reorganization plan.[10] Wrigley led the establishment of the Wrigley Science Institute (WSI) in 2006 to study the oral health benefits of gum chewing. The WSI investigates the effects of gum chewing on weight management, stress relief, concentration, and oral health.[6]

On October 23, 2006, William D. Perez (1948–) succeeded Bill Wrigley as CEO. He was the first person outside the Wrigley family to head the company. In 2007, the company debuted 5 Gum in the US. The 5 Gum brand was marketed using cinematic TV commercials portraying "What it feels like to chew 5 Gum". Perez led the efforts of improving slimmer packaging (Slim Pack) with flavor improvements across both Extra and Wrigley brands.[6]

Dushan Petrovich (1954–) succeeded Perez almost immediately after Mars, Incorporated's 2008 purchase of Wrigley. In 2009, Wrigley's Global Innovation Center received the LEED Gold Certification through Wrigley's commitment to global sustainability. In the 2010 Olympic Games in Vancouver, British Columbia, Wrigley was the Official Confectionery Supplier of the games, in which the company sported Olympic-themed packs and products.[6]

Martin Radvan became the president of the Wrigley Company after Petrovich. He is responsible for the company’s worldwide strategy, operations and business performance.[11]

In some countries, xylitol is used to sweeten gum instead of aspartame. By avoiding sugar, the chance of tooth decay is lowered, since the sugar otherwise used may turn into acid after chewing the gum. It is also claimed that in chewing, it may help to remove food residues. Xylitol based products are allowed by the US Food and Drug Administration to make the medical claim that they do not promote dental cavities.[12]

Wrigley temporarily halted production and sales of its new Alert energy gum as the Food and Drug Administration investigates the safety of caffeinated-food products.[13]

A newspaper ad from 1920 for three types of Wrigley's gum