From Infogalactic: the planetary knowledge core
(Redirected from Writ in acceleration)
Jump to: navigation, search 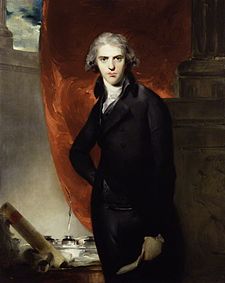 Robert Jenkinson, Lord Hawkesbury, later 2nd Earl of Liverpool and Prime Minister of the United Kingdom, was summoned to the House of Lords through a writ of acceleration as Baron Hawkesbury in 1803.

A writ in acceleration, commonly called a writ of acceleration, was a type of writ of summons that enabled the eldest son and heir apparent of a peer with multiple peerage titles to attend the British or Irish House of Lords, using one of his father's subsidiary titles. This procedure could be used to lower the average age of the house, and increase the number of capable members in a house that drew on a very small pool of talent (a few dozen families in its early centuries, a few hundred in its later centuries), without increasing the effective size of the peerage and thereby diluting the exclusivity of noble titles.

A writ of acceleration was granted only if the title being accelerated was a subsidiary one, and not the main title, and if the beneficiary of the writ was the heir apparent of the actual holder of the title; thus the elder peer was always at least a viscount. The heir apparent was not always summoned in his courtesy title; rather, almost every person summoned to Parliament by virtue of a writ of acceleration was summoned in one of his father’s baronies. For example, William Cavendish, Marquess of Hartington, heir apparent of William Cavendish, 3rd Duke of Devonshire, was summoned as Baron Cavendish of Hardwick. It was not possible for heirs apparent of peers in the Peerage of Scotland and Peerage of Ireland to be given writs of acceleration after 1707 and 1801, respectively, as holders of titles in these peerages were not automatically guaranteed a seat in the British House of Lords.

An heir apparent receiving such a writ took the precedence within the House of Lords owing to the title accelerated. For example, when Viscount Cranborne was accelerated to the barony of Cecil (created 1603), he took precedence ahead of all barons in Parliament created after that date.

If an accelerated baron dies before his father, the barony passes to his heirs if any (according to the remainder governing the creation of the barony), else to his father. For example, Charles Boyle, 3rd Viscount Dungarvan, the eldest surviving son of the Earl of Burlington, was summoned to Parliament in 1689 in his father's barony of Clifford of Lanesborough, but predeceased his father. His son, the first Earl's grandson, was granted a writ of attendance to the Lords in the barony.[1]

Acceleration can affect the numbering of holders of peerages. Suppose the first Earl Z and Baron X has two sons, and that the first son receives the barony by acceleration and dies childless before his father. His brother will eventually become second Earl Z but third Baron X.

Two issues of writs of acceleration may be especially noted. In 1628 James Stanley, Lord Strange, heir apparent of William Stanley, 6th Earl of Derby, was summoned to the House of Lords in the ancient Barony of Strange (created in 1299), a title assumed by his father. However, the House of Lords later decided that the sixth Earl’s assumption of the Barony of Strange had been erroneous. Consequently, it was deemed that there were now two Baronies of Strange, the original one created in 1299 and the new one, created "accidentally" in 1628 (see the Baron Strange for more information). Another noteworthy writ of acceleration was issued in 1717 to Charles Paulet, Marquess of Winchester, heir apparent of Charles Paulet, 2nd Duke of Bolton. He was meant to be summoned in his father's junior title of Baron St John of Basing, but was mistakenly summoned as Baron Pawlett of Basing. This inadvertently created a new peerage. However, the Barony of Pawlett of Basing became extinct on his death, while the Dukedom was passed on to his younger brother, the fourth Duke. The summons of Thomas Butler, 6th Earl of Ossory to the English House of Lords in 1666, as Baron Butler, of Moore Park, may also represent an error for a writ of acceleration in his father's peerage of Baron Butler, of Lanthony (cr. 1660).

When it had been decided that the eldest son of a peer should become a member of the House of Lords, the alternative to a writ of acceleration was to create a completely new peerage. For example, in 1832 Edward Smith-Stanley, Lord Stanley, son and heir apparent of Edward Smith-Stanley, 12th Earl of Derby, was given a new peerage as Baron Stanley, of Bickerstaffe. Two years later he succeeded his father in the Earldom. This was in contrast to his son, Edward Smith-Stanley, 14th Earl of Derby, who in 1844 was summoned to the House of Lords through a writ of acceleration in the aforementioned title of Baron Stanley, of Bickerstaffe. Other examples of new peerages being created for heirs apparent include the barony of Butler in the peerage of England, 1666, for Thomas Butler, 6th Earl of Ossory, eldest son of James Butler, 1st Duke of Ormonde, who sat in the English House of Lords by virtue of this title, although he had been accelerated to the Irish House of Lords as Earl of Ossory. Similarly, after his career in the House of Commons was ended by a defeat in the 1974 general election, Lord Balniel was given a life peerage as Baron Balniel, of Pitcorthie in the County of Fife, enabling him to sit in the House of Lords before succeeding his father, David Lindsay, 28th Earl of Crawford in 1975. By contrast, after retiring from the House of Commons in 1992, George Younger, 4th Viscount Younger of Leckie was conferred a life peerage as Baron Younger of Prestwick, of Ayr in the District of Kyle and Carrick, there being no peerage held by his father other than the viscountcy. For reason both that his father was a baron and that he had no other peerages, John Wyndham, 1st Baron Egremont could not be sent to House of Lords by writ of acceleration, but was created Baron Egremont in 1964, by which title he continued to be known after succeeding as 6th Baron Leconfield in 1967.

Writs of accelerations to the English, later British House of Lords

Writs of accelerations to the Irish House of Lords