The Writers' Building (Bengali: মহাকরণ Mahakaran), often shortened to just Writers', is the secretariat building of the State Government of West Bengal in India.[1] It is located in West Bengal's capital city of Kolkata. It housed the office of the Chief Minister of West Bengal until 4 October 2013. Now most of the departments have moved out to another building named Nabanna in Howrah on a temporary basis for facilitating renovation of the Writers'.

This originally served as the office for writers of the British East India Company, hence the name. Designed by Thomas Lyon in 1777, the Writers' Building has gone through several extensions over the years.

In 1821 a 128 ft-long verandah with Ionic columns, each 32 ft high, were added on the first and second floors. From 1889 - 1906 two new blocks were added, approached by iron staircases that are still in use. Writers’ acquired its Greco-Roman look, complete with the portico in the central bay and the red surface of exposed brick. The parapet was put in place and the statues sculpted by William Fredric Woodington in 1883, that line the terrace, were installed.[2]

The giant pediment at the centre is crowned with the statue of Minerva. The terrace also contains several other statues and notable among them are four clusters of statues, christened 'Justice', 'Commerce', 'Science' and 'Agriculture', with the Greek gods and goddesses of these four streams (Zeus, Hermes, Athena and Demeter respectively) flanked by a European and an Indian practitioner of these vocations.[3]

The 150 meter long Writers' Building covers the entire northern stretch of the a water body locally called Lal Dighi in the B.B.D. Bagh area. Various departments of the West Bengal government are housed in this building. It is an edifice of great political significance and memories of the Indian Independence Movement.

File:Writers2.jpg
Writers' Building from across Lal Dighi in B.B.D. Bagh 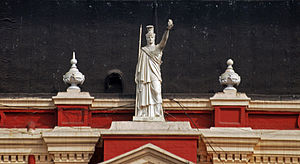 Statue of Minerva atop Writers' Building

1776: The site of the demolished St Anne’s church and the adjoining plot were granted to Thomas Lyon, after whom Lyons Range is named, to construct buildings to accommodate the junior servants of the East India Company or the “writers”. Lyon was acting on behalf of Richard Barwell, member of the council, when Warren Hastings was governor. Writers’ Building was the first three-storey building in Calcutta.

1780: Barwell leased out the range of buildings to the East India Company for the rent-free accommodation of its writers “for five years by his own rate at 31,700 current rupees per annum to be paid half-yearly in advance”. Writers’ looked like a “shabby hospital, or poor-house”.

1800: [Fort William College] , opened to train writers in Oriental languages, later moved to this building. Over the next 20 years, structural changes were made: a hostel for 32 students and an exam hall, which still exist, a lecture hall, four libraries and rooms to teach Hindi and Persian. 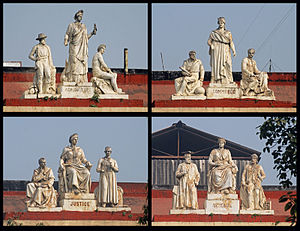 Cluster of statues atop Writers' Building

1830: The college moved out of Writers’ and the building fell into the hands of private individuals who turned it into living quarters, shops and godowns. The Government College of Engineering functioned from here for some time.

1871-74: George Campbell, lieutenant governor-general, felt the need for a secretariat for “quick disposal of work”. But the East Indian Railway Company occupied a large space at Writers’ and was unable to find alternative accommodation.

1877-82: Ashley Eden, lieutenant-governor of Bengal, was told to relocate the principal offices, housed on Sudder Street and Chowringhee, to Writers’. Because of the space crunch, initially three blocks were constructed.

1879-1906: Two new blocks were added, approached by iron staircases that are still in use. Writers’ acquired its Greco-Roman look, complete with the portico in the central bay and the red surface of exposed brick. The parapet was put in place and statues sculpted by William Fredric Woodington in 1883 were installed lining the terrace. Minerva stands above the central portico. Pre-independence, Writers’ had a large courtyard with seven blocks. By 1970, all 13 blocks were constructed. The main block, including the rotunda and five main blocks, are heritage structures.[2]

The building went under renovation in late 2013, in a project costing ₹200 crore (US$30 million). Prior to this, the state Secretariat and Chief Minister’s office temporarily shifted to the Howrah River Bridge Commissioners Building.[4][5] In February 2014, the project was stalled after conservation experts and the state Public Works Department found the plan submitted by an architect firm insufficient.[6] Meanwhile, a team of Jadavpur University and Bengal Engineering and Science University,Shibpur architects was invited to conduct tests of the structure, before the actual renovation could be commenced.[7]

On 8 December 1930 Benoy Basu, Badal Gupta and Dinesh Gupta headed for the Writers’ Building. Dressed in European outfits they carried loaded revolvers. They shot dead the notorious Inspector General of Police Colonel N.S. Simpson, infamous for his brutal oppression of the prisoners in the jail.

After killing Colonel Simpson, they occupied the Writers’ Building, and soon a gun battle followed in the corridors. Unable to stand up to the numerous forces of Calcutta police, the trio soon found themselves overpowered and cornered.

Unwilling to give themselves up, Badal took potassium cyanide and died instantly, while his comrades shot themselves. Benoy died five days later in hospital but Dinesh survived only to be hanged on 7 July 1931.

Today Dalhousie Square is named after the trio and is called B.B.D. Bagh. A statue of Benoy, Badal and Dinesh stands in front of the Writers’ Building, showing Benoy, the group leader, leading his comrades in their final battle.