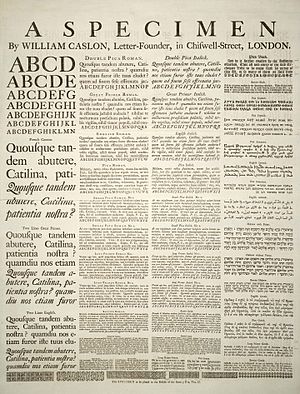 A Specimen of typeset fonts and languages, by William Caslon, letter founder; from the 1728 Cyclopaedia.

A written language is the representation of a spoken or gestural language by means of a writing system. Written language is an invention in that it must be taught to children; children will pick up spoken language (oral or sign) by exposure without being specifically taught.

A written language exists only as a complement to a specific spoken language, and no natural language is purely written. However, extinct languages may be in effect purely written when only their writings survive.[citation needed]

Written languages change more slowly than corresponding spoken languages. When one or more registers of a language come to be strongly divergent from spoken language, the resulting situation is called diglossia. However, such diglossia is often considered as one language, between literary language and other registers, especially if the writing system reflects its pronunciation.

Native readers and writers of English are often unaware that the complexities of English spelling make written English a somewhat artificial construct. The traditional spelling of English, at least for inherited words, preserves a late Middle English phonology that is no one's speech dialect. The artificial preservation of this much earlier form of the language in writing might make much of what we write intelligible to Chaucer (1343–1400), even if we could not understand his speech.