Wrotham Park (pronounced "Rootam")[1] is a neo-Palladian English country house in Hertsmere, Hertfordshire, designed by Isaac Ware in 1754 for Admiral John Byng, the fourth son of Admiral Sir George Byng. It remains in the family at the heart of a 2,500-acre (10 km2) estate 17 miles (27 km) from Hyde Park Corner. It is one of the largest private houses inside the M25 motorway. Its distinctive exterior has often been used as a filming location.

Originally part of an estate known as Pinchbank (also Birchbank), first recorded in Middlesex in 1310 and owned in the 17th and early 18th centuries by the Howkins family, the property passed to Thomas Reynolds, a director of the South Sea Company, who renamed the estate Strangeways. His son, Francis, sold the property to Admiral John Byng who had the house rebuilt by Isaac Ware in 1754.[2]

Admiral John Byng changed the name of the house to Wrotham Park in honour of the original family home in Wrotham, Kent.[3] Byng never had an opportunity to live in retirement at Wrotham. Following his inadequately equipped expedition to relieve Minorca from the French during the Seven Years' War, he was court martialled and executed in 1757. This event was satirised by Voltaire in his novel Candide. In Portsmouth, Candide witnesses the execution of an officer by firing squad; and is told that "in this country, it is wise to kill an admiral from time to time to encourage the others" (pour encourager les autres).[2]

The house was inherited by John Byng, 1st Earl of Strafford in 1847 and passed to his son, George Byng, 2nd Earl of Strafford, on the first earl's death in 1860.[2] A disastrous fire in 1883 burned slowly enough to permit retrieval of the contents of the house, but gutted it.[2] The house was rebuilt exactly as it was and still remains in the hands of the Byng family.[4] 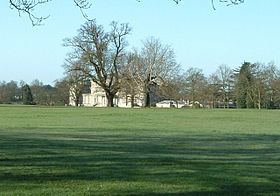 Wrotham Park was used for various movies as a filming location.[5]

In Robert Altman's Gosford Park (2001) scenes were shot at Wrotham Park, including exterior scenes and the staircase, dining room, library and living room. It was also used for the filming of Peter's Friends.

Wrotham Park was filmed as Hanbury Hall in "Ghost in the Machine" a 1989 episode of ITV's Inspector Morse.[6]

Location scenes for the ITV Jeeves and Wooster television series were shot at Wrotham Park. Both the interior of Brinkley Court and the interior and exterior of Chuffnell Hall (Episodes 4 & 5, Series 2) were filmed there.

Location scenes for the BBC TV production of Alan Hollinghurst's The Line of Beauty (2006) were also shot at Wrotham Park, including the exterior, lawns, dining room, library, drawing room and living room.

Location scenes for the BBC TV miniseries Sense and Sensibility (2008) were also shot at Wrotham Park. The exterior of Norland Park was filmed there.[7]

Location scenes for the idents of the Dave channel were shot at Wrotham Park.

Location scenes for the BBC TV production The Hour (2011) were also shot at Wrotham Park.

In 2013–14, location scenes for the comic action spy film Kingsman: The Secret Service were shot at Wrotham Park.

Pavlos, Crown Prince of Greece and the former Marie-Chantal Miller had a pre-wedding reception attended by approximately 1,300 guests two days before their July 1, 1995 wedding.

Chelsea and England footballer Ashley Cole and Girls Aloud singer Cheryl Tweedy had their wedding blessed at Wrotham Park on 15 July 2006 – they weren't allowed to have their wedding there because Wrotham Park does not have a licence to hold civil weddings.

Music mogul Simon Cowell held his 50th birthday party at Wrotham Park on 3 October 2009. The party, estimated to have cost £1 million, was attended by an estimated 400 guests, and the house itself was bathed in blue light specially for the occasion, with a picture of the host beamed onto the wall of the property.[10]