From Infogalactic: the planetary knowledge core
Jump to: navigation, search
This article is about the Wudang region in Hubei, China. For other uses, see Wutang.

The Wudang Mountains (simplified Chinese: 武当山; traditional Chinese: 武當山; pinyin: Wǔdāng Shān) consist of a small mountain range in the northwestern part of Hubei, China, just south of Shiyan. They are home to a famous complex of Taoist temples and monasteries associated with the god Xuan Wu. The Wudang Mountains are renowned for the practice of Taichi and Taoism as the Taoist counterpart to the Shaolin Monastery, which is affiliated with Chinese Chán Buddhism.

On Chinese maps, the name "Wudangshan" (Chinese: 武当山) is applied both to the entire mountain range (which runs east-west along the southern edge of the Han River, crossing several county-level divisions of Shiyan), and to the small group of peaks located within Wudangshan subdistrict of Danjiangkou, Shiyan. It is the latter specific area which is known as a Taoist center.[1]

Modern maps show the elevation of the highest of the peaks in the Wudang Shan "proper" as 1612 meters;[1][2] however, the entire Wudangshan range has somewhat higher elevations elsewhere.[1]

Some consider the Wudang Mountains to be a "branch" of the Daba Mountains range,[2] which is a major mountain system of the western Hubei, Shaanxi, Chongqing and Sichuan. 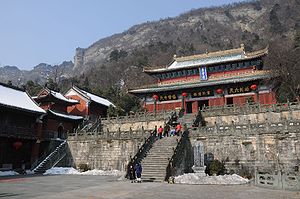 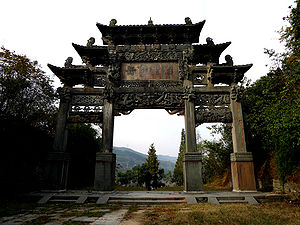 The Gate of Yuan Wu at Wudang Mountains

For centuries, the mountains of Wudang have been known as an important centre of Taoism, especially famous for its Taoist versions of martial arts or Taichi.[3]

The first site of worship—the Five Dragons Temple—was constructed at the behest of Emperor Taizong of Tang.[4] Further structures were added during the Song and Yuan dynasties, while the largest complex on the mountain was built during the Ming dynasty (14th–17th centuries) as the Yongle Emperor claimed to enjoy the protection of the god Beidi or Xuan Wu.[4] Temples regularly had to be rebuild, and not all survived; the oldest extant structures are the Golden Hall and the Ancient Bronze Shrine, made in 1307.[4] Other noted structures include Nanyang Palace (built in 1285-1310 and extended in 1312), the stone-walled Forbidden City at the peak (built in 1419), and the Purple Cloud Temple (built in 1119-26, rebuilt in 1413 and extended in 1803-20).[4]

The monasteries such as the Wudang Garden were made a UNESCO World Heritage Site in 1994.[4]

On January 19, 2003, the 600-year-old Yuzhengong Palace at the Wudang Mountains was accidentally burned down by an employee of a martial arts school.[5] A fire broke out in the hall, reducing the three rooms that covered 200 square metres to ashes. A gold-plated statue of Zhang Sanfeng, which was usually housed in Yuzhengong, was moved to another building just before the fire, and so escaped destruction in the inferno.[3]

At the first national martial arts tournament organized by the Central Guoshu Institute in 1928, participants were separated into practitioners of Shaolin and Wudang styles. Styles considered to belong to the latter group - called Wudang chuan - are those with a strong element of Taoist neidan exercises. Typical examples of Wudang chuan are Taiji quan, Xing Yi Quan and Baguazhang. According to legend, Taijiquan was created by the Taoist hermit Zhang Sanfeng, who lived in the Wudang mountains.[6]

Wudangquan has been partly reformed to fit the PRC sport and health promotion program. The third biannual Traditional Wushu Festival was held in Wudang Mountains from October 28 to November 2, 2008.[7]