Wyddial is a village and civil parish in the East Hertfordshire district of Hertfordshire, England. It is located around a mile and a half north-east of Buntingford (OS grid reference TL 373 317) and lies due north of Greenwich on the Prime Meridian. 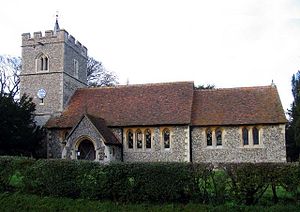 The place name is first attested in the Domesday Book of 1086 and means 'willow nook'.[1]

The parish church of St Giles dates from the 14th century when the nave was built. The tower and chancel date from the 15th century. In 1859 the nave was restored and the chancel and south porch rebuilt by Baillie & Co.[2] 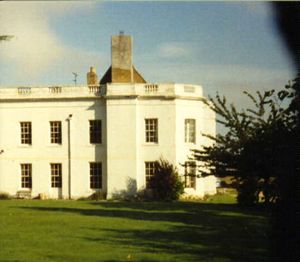 Wyddial Hall from the churchyard.

Wyddial Hall is a Grade II listed building, which was originally built in the early 16th century. The hall is situated just north of the church and has access via the churchyard. In 1733 it was remodelled after a damaging fire for Francis Goulston. By 1780 it had been acquired by John Thomas Ellis, MP for Lostwithiel, who made alterations, and later changes were made by Charles Heaton-Ellis.[3] Admiral Edward Heaton-Ellis, who fought in the Battle of Jutland, was born at Wyddial.The Hall was used as accommodation for the Land Army during the 1939-45 war. Sir Charles Heaton Ellis sold the surrounding farmland to the Hodge family in the 1930s. On his death in 1946 the Hall was bought by William & Christina Gibson then in 1964 by Mrs Jennifer Boyd-Carpenter. the Ecclesiastical Embroiderer and her husband Michael a Member of the Stock Exchange.The house was sold in 1995 to Michael Hatchard an International Lawyer.