From Infogalactic: the planetary knowledge core
Jump to: navigation, search
Not to be confused with Wyoming, Luzerne County, Pennsylvania.

Wyoming County is a county located in the U.S. state of Pennsylvania. As of the 2010 census, the population was 28,276.[1] Its county seat is Tunkhannock.[2] It was created in 1842 from part of Luzerne County.

According to the U.S. Census Bureau, the county has a total area of 405 square miles (1,050 km2), of which 397 square miles (1,030 km2) is land and 7.7 square miles (20 km2) (1.9%) is water.[3] The county is intersected by the North Branch of the Susquehanna River, and drained by Tunkhannock, Mehoopany, and other large creeks. The land surface is generally hilly or mountainous, Mehoopany, Tunkhannock, Knob, and Bowman's mountains occupying a portion. The soil is fertile. Timber, coal, and iron are very abundant.[4] 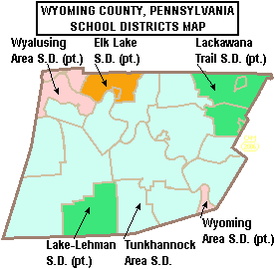 Skyhaven Airport is a public use airport located in Wyoming County, one nautical mile (1.85 km) south of the central business district of Tunkhannock.[12]

With the town sited on the lower end of the upper third of the Susquehanna, busily wending its way south to the Chesapeake Bay, the river banks to either side the whole length of the Susquehanna were historically used as a rail transport corridor with competing railroads typically making their way on either side on the important NYC and Philadelphia to Buffalo, New York routes connecting the eastern seaboard to cities such as Chicago on the Great Lakes; towns like Tunkhannock played an important role in the highly competitive stakes for such high profit passenger expresses for steam locomotives had surprisingly short cruising ranges and passenger travel had higher earnings than freight. Today, except for select parts, the river bank rail transport infrastructures remaining are mainly left bank located assets of a single railroad's operations department, even shared roads (operated over by several lines) these days use the single corridor along the east/left river bank connecting the large Sayre Yard on the stateline in Sayre, Pennsylvania further upriver to the transitional Duryea yard. After the collapse of Conrail, trackage on the Northern Susquehanna is operated by Norfolk Southern, with some areas sublet to other road companies. The trackage running through Tunkhannock

Pennsylvania Route 29 ('PA-29', a continuation of US-309 from Philadelphia and Allentown) connects to the New York state line providing north-south road connections by secondary highway, whilst PA-92, and especially U.S. Route 6 (US-6) provide major east-west secondary highway access to the region. 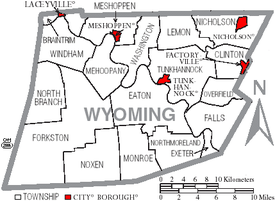 Under Pennsylvania law, there are four types of incorporated municipalities: cities, boroughs, townships, and, in at most two cases, towns. The following boroughs and townships are located in Wyoming County: