Wytch Farm is an oil field and processing facility in the Purbeck district of Dorset, England. It is the largest onshore oil field in western Europe. The facility, recently taken over by Perenco was previously operated by BP. It is hidden in a coniferous forest on Wytch Heath on the southern shore of Poole Harbour, two miles (3 km) north of Corfe Castle. Oil and natural gas (methane) are both exported by pipeline; liquefied petroleum gas is exported by road tanker.

The oil field drew its name from the neighbouring Wytch Farm which had existed on the site for many centuries on the fringes of Wytch Heath.[1]

The Isle of Purbeck's oil-shale field, or "Kimmeridge Coal" which has been won from the cliffs to the east of Kimmeridge since the early 17th century, is no longer used commercially.[2] Similar deposits were found at Wytch Farm in the 1890s,[2] but were commercially exploited until only circa 1900, and only at a low level.[2] The Kimmeridge Oil and Carbon Company reported that in 1890 it had dug 5,000 ft of underground tunnels at Kimmeridge on four levels into the local cliffs. There was a local jetty to export the oil shale, and smaller operations occurred at nearby Bencliff Grit east of Osmington Mills.[3]

Isle of Purbeck's oil industry began in 1936 with the first unsuccessful and then experimental wells drilled at Broad Bench near Kimmeridge by D'Arcy Exploration.[2] The area had long been mined for oil shale and tar, but was only prospected for crude oil in the 1950s.[4] It was not until 1959 that a borehole at Kimmeridge showed that oil was seeping out, and 1960 saw British Petroleum's Kimmeridge Oil Field discovered.[2]

The field was discovered by the nationalised British Gas Corporation in December 1973 and began producing oil in 1979. As part of the privatisation of British Gas in the 1980s Wytch Farm was sold to BP which took over as operator in 1984.[5] In May 2011, BP announced that it had agreed to sell its majority interest in Wytch Farm to Perenco, which became the new operator.[6] Premier Oil has a 30.1% stake in the field.[7] BP announced May 17, 2011, the sale of its interests in the Wytch Farm, Wareham, Beacon and Kimmeridge fields to Perenco[8] and the sale of the Dimlington gas terminal to Perenco in February 2011.[9]

The field is located in a faulted block of Jurassic and older rocks beneath the Hampshire Basin, close to the steeply sloping monocline in the overlying chalk. The Purbeck Monocline defines the fields southern limit. The field consists of three separate reservoirs known as Bridport, Sherwood and Frome. Bridport, the first discovery, is in the Jurassic Bridport Sands 900 metres (3,000 ft) below Poole Harbour, with an oil source in the Lower Lias. The much larger Sherwood (discovered 1978) is below this in the Triassic Sherwood Sands at 1,600 metres (5,200 ft) and extends under Poole Bay. Frome is in a shelly limestone at 750 metres (2,460 ft). The field extends eastwards from Sandbanks and Studland for around 10 kilometres (6.2 mi) under the sea to the south of Bournemouth.[10] 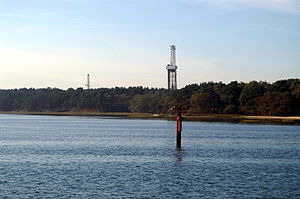 Most of the field is protected by various conservation laws, including the Jurassic Coast world heritage site, Purbeck Heritage Coast and a number of sites of special scientific interest, areas of outstanding natural beauty and nature reserves (including Studland and Brownsea Island), so the gathering centre and most of the well sites are small and well screened by trees. Directional drilling has also contributed to reducing the impact on the local environment, with extended reach drilling from the Goathorn Peninsula attaining distances in excess of 10 km. 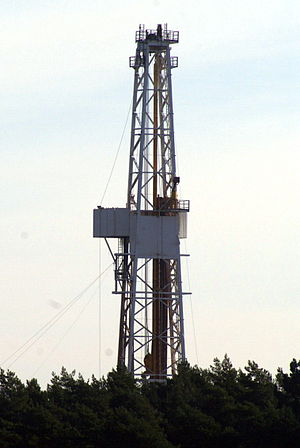 Oil is piped about 91 kilometres (57 mi) from Wytch Farm via Fawley to a terminal on the far side of Southampton Water at Hamble, for export by tanker. Natural Gas (methane) is piped to Sopley, north of Christchurch, for use in the national domestic gas supply network. Smaller quantities of liquefied petroleum gas are transported by road.[13] A rail terminal at Furzebrook connecting to the Swanage Railway between Corfe Castle and Wareham is now closed and mothballed.