The XVIII Airborne Corps is the corps of the United States Army designed for rapid deployment anywhere in the world. It is referred to as "America's Contingency Corps". Its headquarters are at Fort Bragg, North Carolina.

The corps was first activated on 17 January 1942 as the II Armored Corps at Camp Polk in Louisiana. When the concept of Armored Corps proved unnecessary, II Armored Corps was redesignated as XVIII Corps on 9 October 1943 at the Presidio of Monterey, California.

XVIII Corps deployed to Europe on 17 August 1944 and became the XVIII Airborne Corps on 25 August 1944 at Osbourne, St. George, England, assuming command of the 82nd and 101st Airborne divisions, as part of the preparation for Operation Market Garden. Prior to this time the 101st Airborne Division and 82nd Airborne Division were assigned to VII Corps and participated in Operation Overlord as part of VII Corps.[2]

Major General Matthew B. Ridgway commanded the corps, which then consisted of the 82nd and the 101st Airborne Divisions and was part of the First Allied Airborne Army. Following the Battle of the Bulge, all airborne units in the U.S. Army fell under the command of the corps. XVIII Airborne Corps planned and executed Operation Varsity, the crossing of the Rhine River into Germany. It was one of the largest airborne operations in World War II, including the 17th Airborne Division and the British 6th Airborne Division. The 13th Airborne Division was to participate in the assault, however due to a lack of a sufficient number of transports, it was unable to take part. The XVIII Airborne Corps returned to the U.S. in June 1945 and inactivated on 15 October 1945 at Camp Campbell, Kentucky.

The corps was reactivated at Fort Bragg on 21 May 1951 under the command of Major General John W. Leonard. Since then, the corps has been the primary strategic response force, with subordinate units participating in over a dozen major operations (listed below) in both combat and humanitarian roles, primarily in Central America and the CENTCOM area of responsibility.[citation needed]

In 1958 the XVIII Airborne Corps was given the additional designation of the Strategic Army Corps. The designation was, in reality, the assignment of an additional mission rather than a true designation. The additional mission was to provide a flexible strike capability that could deploy worldwide on short notice without declaration of an emergency. The 4th Infantry Division at Fort Lewis, Washington, and the 101st Airborne Division at Fort Campbell, Kentucky, were designated as STRAC's first-line divisions, while the 1st Infantry Division at Fort Riley, Kansas, and the 82d Airborne Division at Fort Bragg were to provide backup in the event of general war. The 5th Logistical Command (later inactivated), also at Fort Bragg, would provide the corps with logistics support, while Fort Bragg's XVIII Airborne Corps Artillery would control artillery units.[3]

The corps deployed forces to the United States occupation of the Dominican Republic ('Operation Power Pack') in 1965.

In 1989 XVIII Airborne Corps, commanded by then LTG Carl Stiner, participated in the invasion of Panama in Operation Just Cause. Stiner served concurrently as Commander of Joint Task Force South.

During Operations Desert Shield and Desert Storm XVIII Airborne Corps Artillery consisted of the 5-8th, 3-8th and 1-39th Field Artillery Regiments (FAR). The living quarters for these three units were situated between the 82d Airborne Division and the Special Forces at Fort Bragg. Of the three units, only 1-39th was airborne qualified and served as the only fully airborne deployable 155mm Field Artillery unit in history.[citation needed] The 1-39th FAR and 3-8th FAR were key components of the thrust into Iraq in the first Gulf War, providing fire support for the French Foreign Legion and the 82nd Airborne Division. All of the battalions were subsequently re-flagged during the years following the Gulf War. The 5th Battalion, 8th Field Artillery also served in a major support role for 82nd and French troops during the Gulf War. 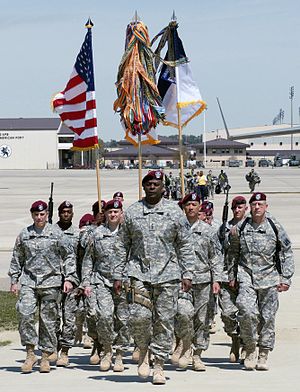 The Corps headquarters was deployed to Afghanistan from May 2002-2003, and became Combined Joint Task Force 180 for the deployment.

Under the previous Army Chief of Staff's future restructure of the Army, the corps headquarters of the XVIII Airborne Corps will lose its airborne (specifically parachute) certification as a cost-cutting measure—the same will occur to the divisional headquarters of the 82nd Airborne Division. This plan is designed to follow the U.S. Army's restructuring plan to go from being division-based to brigade-based. This will mean that the largest units that will be airborne—specifically parachute certified—will be at the brigade level. Even so, for traditional and historical reasons, the formation will continue to be called the XVIII Airborne Corps.

The divisions that fall under the XVIII Airborne Corps (as well as the other two corps in the Army) are in a period of transition, shifting from corps control to fall directly under FORSCOM, eliminating the corps status as a middle man. This ties in with the Army's broad modularity plan, as a corps can deploy and support any unit, not just the units subordinate to the corps. The 3rd Infantry Division, the 10th Mountain Division (Light Infantry), and the 101st Airborne Division (Air Assault) have already changed over to direct FORSCOM control. The 82nd Airborne Division will transfer after the division returns from Afghanistan.

In August 2006, XVIII Airborne Corps traveled to South Korea to participate in Ulchi Focus Lens, a joint training exercise between the Republic of Korea Army and coalition forces stationed there.[4]

In mid-April, 2007, the Department of the Army confirmed the next OIF deployment schedule, with XVIII Airborne Corps deploying to relieve III Corps as the MNC-I at Camp Victory, Baghdad, Iraq. XVIII Airborne Corps is scheduled to replace III Corps in November, 2007. The corps will deploy along with 1st Armored Division and 4th Infantry Division, as well as 1st Brigade Combat Team, 10th Mountain Division, and 1st BCT, 82nd Airborne Division.[5]

Order of Battle of the XVIII Airborne Corps (click to enlarge)

Other major units stationed along the XVIII Corps units are:

The corps has participated in a number of operations since then: