This system is in contrast with the ZW sex-determination system found in birds, some insects, many reptiles, and other animals, in which the heterogametic sex is female.

A temperature-dependent sex determination system is found in some reptiles.

In humans, a single gene (SRY) present on the Y chromosome acts as a signal to set the developmental pathway towards maleness. Presence of this gene starts off the process of virilization. This and other factors result in the sex differences in humans.[1] The cells in females, with two X chromosomes, undergo X-inactivation, in which one of the two X chromosomes is inactivated. The inactivated X chromosome remains within a cell as a Barr body.

Humans, as well as some other organisms, can have a chromosomal arrangement that is contrary to their phenotypic sex; for example, XX males or XY females (see androgen insensitivity syndrome). Additionally, an abnormal number of sex chromosomes (aneuploidy) may be present, such as Turner's syndrome, in which a single X chromosome is present, and Klinefelter's syndrome, in which two X chromosomes and a Y chromosome are present, XYY syndrome and XXYY syndrome.[1] Other less common chromosomal arrangements include: triple X syndrome, 48, XXXX, and 49, XXXXX.

XY system in mammals: Sex is determined by presence of Y. "Female" is the default sex; due to the absence of the Y.[2] In the 1930s, Alfred Jost determined that the presence of testosterone was required for Wolffian duct development in the male rabbit.[3]

Birds and many insects have a similar system of sex determination (ZW sex-determination system), in which it is the females that are heterogametic (ZW), while males are homogametic (ZZ).

Many insects of the order Hymenoptera instead have a system (the haplo-diploid sex-determination system), where the males are haploid individuals (which just one chromosome of each type), while the females are diploid (with chromosomes appearing in pairs). Some other insects have the X0 sex-determination system, where just one chromosome type appears in pairs for the female but alone in the males, while all other chromosomes appear in pairs in both sexes. 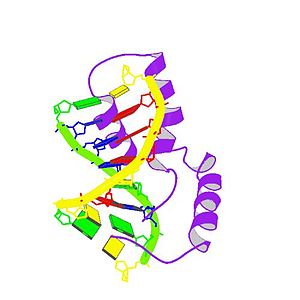 For a long time, biologists believed that the female form was the default template for the mammalian fetuses of both sexes. After the discovery of the testis-determining gene SRY, many scientists shifted to the theory that the genetic mechanism that determines a fetus to develop into a male form was initiated by the SRY gene, which was thought to be responsible for the production of testosterone and its overall effects on body and brain development. This perspective still shared the classical way of thinking; that in order to produce two sexes, nature has developed a default female pathway and an active pathway by which male genes would initiate the process of determining a male sex, as something that is developed in addition to and based on the default female form. This view is no longer considered accurate by most scientists who study the genetics of sex. In an interview for the Rediscovering Biology website,[5] researcher Eric Vilain described how the paradigm changed since the discovery of the SRY gene:

For a long time we thought that SRY would activate a cascade of male genes. It turns out that the sex determination pathway is probably more complicated and SRY may in fact inhibit some anti-male genes.

We [are] entering this new era in molecular biology of sex determination where it's a more subtle dosage of genes, some pro-males, some pro-females, some anti-males, some anti-females that all interplay with each other rather than a simple linear pathway of genes going one after the other, which makes it very fascinating but very complicated to study.

In mammals, including humans, the SRY gene is responsible with triggering the development of non-differentiated gonads into testes, rather than ovaries. However, there are cases in which testes can develop in the absence of an SRY gene (see sex reversal). In these cases, the SOX9 gene, involved in the development of testes, can induce their development without the aid of SRY. In the absence of SRY and SOX9, no testes can develop and the path is clear for the development of ovaries. Even so, the absence of the SRY gene or the silencing of the SOX9 gene are not enough to trigger sexual differentiation of a fetus in the female direction. A recent finding indicates that ovary development and maintenance is an active process,[6] regulated by the expression of a "pro-female" gene, FOXL2. In an interview[7] for the TimesOnline edition, study co-author Robin Lovell-Badge explained the significance of the discovery:

We take it for granted that we maintain the sex we are born with, including whether we have testes or ovaries. But this work shows that the activity of a single gene, FOXL2, is all that prevents adult ovary cells turning into cells found in testes.

Looking into the genetic determinants of human sex can have wide-ranging consequences. Scientists have been studying different sex determination systems in fruit flies and animal models to attempt an understanding of how the genetics of sexual differentiation can influence biological processes like reproduction, ageing[8] and disease.

Hormone levels in the male parent affect the sex ratio of sperm in humans.[9] Maternal influences also impact which sperm are more likely to achieve conception.

Human ova, like those of other mammals, are covered with a thick translucent layer called the zona pellucida, which the sperm must penetrate to fertilize the egg. Once viewed simply as an impediment to fertilization, recent research indicates the zona pellucida may instead function as a sophisticated biological security system that chemically controls the entry of the sperm into the egg and protects the fertilized egg from additional sperm.[10]

Recent research indicates that human ova may produce a chemical which appears to attract sperm and influence their swimming motion. However, not all sperm are positively impacted; some appear to remain uninfluenced and some actually move away from the egg.[11]

Maternal influences may also be possible that affect sex determination in such a way as to produce fraternal twins equally weighted between one male and one female.[12]

The time at which insemination occurs during the oestrus cycle has been found to affect the sex ratio of the offspring of humans, cattle, hamsters, and other mammals.[9] Hormonal and pH conditions within the female reproductive tract vary with time, and this affects the sex ratio of the sperm that reach the egg.[9]

Since ancient times, people have believed that the sex of an infant is determined by how much heat a man's sperm had during insemination. Aristotle wrote that:

...the semen of the male differs from the corresponding secretion of the female in that it contains a principle within itself of such a kind as to set up movements also in the embryo and to concoct thoroughly the ultimate nourishment, whereas the secretion of the female contains material alone. If, then, the male element prevails it draws the female element into itself, but if it is prevailed over it changes into the opposite or is destroyed.

Aristotle claimed that the male principle was the driver behind sex determination,[13] such that if the male principle was insufficiently expressed during reproduction, the fetus would develop as a female. In contrast, modern genetics has developed a view on sex determination in which no one single factor is responsible for determining sex; a number of pro-male, anti-male and pro-female genes being responsible, though the largest factor is whether the male's gamete carries an X or Y chromosome.

Beginnings of genetics of sex determination

Edmund Beecher Wilson and Nettie Stevens are credited with discovering, in 1905, the chromosomal XY sex-determination system; the fact that males have XY sex chromosomes and females have XX sex chromosomes.[citation needed]

The first clues to the existence of a factor that determines the development of testis in mammals came from experiments carried out by Alfred Jost,[14] who castrated embryonic rabbits in utero and noticed that they all developed as female.[citation needed]

In 1959, C. E. Ford and his team, in the wake of Jost's experiments, discovered[15] that the Y chromosome was needed for a fetus to develop as male when they examined patients with Turner's syndrome, who grew up as phenotypic females, and found them to be X0 (hemizygous for X and no Y). At the same time, Jacob & Strong described a case of a patient with Klienfelter's syndrome (XXY),[16] which implicated the presence of a Y chromosome in development of maleness.[17]