Not to be confused with Xavier de Maistre (harpist)

Xavier de Maistre (French pronunciation: ​[ɡzavje də mɛstʁ]; 10 October 1763[1] – 12 June 1852) of Savoy (then part of the Kingdom of Piedmont-Sardinia), lived largely as a military man, but is known as a French writer. The younger brother of noted philosopher and counter-revolutionary Joseph de Maistre, Xavier was born to an aristocratic family at Chambéry in October 1763. He served when young in the army of Piedmont-Sardinia, and in 1790 wrote his fantasy, Voyage autour de ma chambre ("Voyage Around My Room", published 1794), when he was under arrest in Turin as the consequence of a duel.[2]

Xavier shared the political sympathies of his brother Joseph, and after a French revolutionary army annexed Savoy to France in 1792, he left the service, and eventually took a commission in the Russian army. He served under Alexander Suvorov in his victorious Austro-Russian campaign and accompanied the marshal to Russia in 1796. By then, Suvorov's patron Catherine II of Russia had died, and the new monarch Paul I dismissed the victorious general (partly on account of the massacre of 20,000 Poles after he conquered Warsaw). Xavier de Maistre shared the disgrace of his general, and supported himself for some time in St. Petersburg by miniature painting, particularly landscapes.[3]

In 1803, Joseph de Maistre was appointed as Piedmont-Sardinia's ambassador to the court of Alexander I, Tsar of Russia. On his brother's arrival in St. Petersburg, Xavier de Maistre was introduced to the Minister of the Navy, and was appointed to several posts including director of the Library, and of the Museum of Admiralty. He also joined active service, and was wounded in the Caucasus, attaining the rank of major-general. In 1812 he married a Russian lady, related to the Tsars, Mrs. Zagriatsky. He remained in Russia even after the overthrow of Napoleon and the consequent restoration of the Piedmontese dynasty.[3] 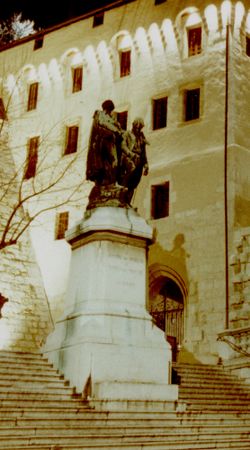 His Voyage autour de ma chambre (1794),[1] a parody set in the tradition of the grand travel narrative, is an autobiographical account of how a young official, imprisoned in his room for six weeks, looks at the furniture, engravings, etc., as if they were scenes from a voyage in a strange land. He praises this voyage because it does not cost anything, for this reason it is strongly recommended to the poor, the infirm, and the lazy. His room is a long square, and the perimeter is thirty-six paces. "When I travel through my room," he writes, "I rarely follow a straight line: I go from the table towards a picture hanging in a corner; from there, I set out obliquely towards the door; but even though, when I begin, it really is my intention to go there, if I happen to meet my armchair en route, I don’t think twice about it, and settle down in it without further ado." Later, proceeding North, he encounters his bed, and in this way he lightheartedly continues his "Voyage". This work is remarkable for its play with the reader's imagination, along the lines of Laurence Sterne, whom Xavier admired. Xavier did not think much of Voyage, but his brother Joseph had it published.

Most of his other works are of modest dimensions; these include

In 1839, after the publication of a French edition of La Jeune Sibérienne (1825) Maistre went on a long journey to Paris and Savoy. He was surprised to find himself well known in literary circles. Alphonse de Lamartine dedicated a poem to him (Retour, 1826) praising his genius: "the future sons will say [...] it is your heart, which through your mellifluous writings you have passed to us". He met Charles Augustin Sainte-Beuve, who has left some pleasant reminiscences of him.

For a time, he lived at Naples, but eventually he returned to St. Petersburg and died there in 1852.[2]

Allusions in other works

The novel "Voyage Around My Room" was first performed in Zürich in 2013.[4]