From Infogalactic: the planetary knowledge core
Jump to: navigation, search
This is a Chinese name; the family name is Uy and Lim is a generation name.

Alexander Xian Cruz Lim Uy (Chinese: 冼立呒 Xiǎn Lì Fǔ July 12, 1989[1]) is a Chinese-Filipino actor, model and singer, also known as Xian Lim. Lim is a contract artist of Star Magic. Lim is famous for playing the roles of Andy in the series, My Binondo Girl in 2011 and Rocco in the blockbuster hit movie, Bride for Rent.

Upon graduating high school in Daly City, California, he returned to the Philippines to study college as a basketball varsity scholar at the University of the East in Manila.[2] Before getting a degree, he became involved with modeling, and eventually, acting.

Lim was cast in a few minor roles before landing a supporting role in Katorse in 2009.[3] In 2010, he was a cast in the drama Rubi as Luis Navarro. Then, he guest starred in 100 Days to Heaven as Jojo Villanueva,[4] He was a guest judge on Showtime and had one-episode appearances for Midnight DJ, Maalaala Mo Kaya, Wansapanataym and Your Song Presents: Andi. 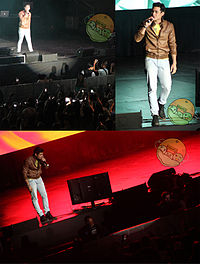 In 2011, after a special participation in Minsan Lang Kita Iibigin portraying the young Joaquin del Tierro,[5] he landed his first major lead role in My Binondo Girl top-billed by Kim Chiu. The romantic-comedy television drama was a nationwide success, garnering an average household TV rating of 28.2% provided by Kantar Media/TNS.

In early 2012, Lim signed a three-picture contract with Star Cinema.[6] and appeared in the film, My Cactus Heart.[7] In the same year, he starred in a youth-oriented movie with Enchong Dee, Enrique Gil and Kean Cipriano, entitled The Reunion.[8] He was also back in primetime through the teleserye drama Ina, Kapatid, Anak with Kim Chiu, Maja Salvador and Enchong Dee. He also released his debut studio album So It's You under Star Records which reached a Gold Record status.[9][10]

In 2013, his film Bakit Hindi Ka Crush Ng Crush Mo? with his onscreen and offscreen partner Kim Chiu earned Php 10.5M in the first day of film showing alone, consequentially surpassing the P100-million mark at the box office for the year 2013 in three weeks time. From the outstanding box office sales, the pair obtained the nickname as the newest blockbuster royalties of their generation.

In 2014, his second movie with his Chiu entitled Bride for Rent earned a whopping Php 21.2M on its first day and Php 100M in just 4 days. The movie eventually grossed Php 326,958,423 during its whole run in theaters which validated the KimXi tandem's box office draw.

Xian Lim is an only child of his parents and is of Chinese-Filipino descent (both his parents are Filipinos of Chinese lineage). He was born in San Francisco, California, however, at only 6 months old, his family moved back to Manila, Philippines where he spent most of his childhood and elementary education. His father and mother subsequently separated when he was still young. At 10 years old they again relocated this time to Daly City, California where he completed his middle school and high school education. He didn't return to Manila until after he graduated high school at age 18.[11][12]

As a child, he was interested in music and entertainment, noting his ability to play musical instruments including piano, trombone, saxophone and guitar, later joining a symphonic band.[13] His other interests include films, traveling and sports. Lim actively promotes living a healthy lifestyle.[14] Despite admitting to be a big fan of food, he is a self-professed health-buff, enjoys activities like running and exercises, with further intentions to someday joining a triathlon.[15]

In 2011, Xian began courting fellow Star Magic artist and leading lady Kim Chiu.[16] After much speculation, Lim and Chiu were reported to be dating by 2012. After many sightings and vacations together overseas, they admitted to be exclusively dating on a July 2013 episode of ABS-CBN talk show Kris TV.[17][18] He was said to be a main support to his girlfriend in the midst of the controversy over the death of her long lost mother.[19]

Using his love for basketball and music, he also participated in various charity games including annual birthday events at local missions foundations,[20] performing at benefit concerts, an event in IloIlo under Star Magic[21] and San Juan City for the victims of Typhoon Sendong.[22] In August 2012, he and Kim Chiu spearheaded a relief operation in Marikina for the city's flood-affected victims.[23]

During 2013 Lim joined the PETA campaign Free Mali along with Kim Chiu. Lim made a video plea for Mali (can be viewed on YouTube) asking that she be moved to a sanctuary for the sake of her well being.[24]