Yizhu was born in 1831 at the Old Summer Palace, eight kilometres northwest of Beijing. He was from the Manchu Aisin Gioro clan, and was the fourth son of the Daoguang Emperor. His mother was the Noble Consort Quan, of the Manchu Niohuru clan, who was made Empress in 1834, and is known posthumously as Empress Xiaoquancheng. Yizhu was reputed to have an ability in literature and administration which surpassed most of his brothers, which impressed his father, who therefore decided to make him his successor.

Yizhu succeeded the throne in 1850, at age 19, and was a relatively young emperor. He inherited a dynasty that faced not only internal but also foreign challenges. Yizhu's reign title, Xianfeng, which means "Universal Prosperity", did not reflect the situation. In 1850, the first of a series of popular rebellions began that would nearly destroy the Qing dynasty. The Taiping Rebellion began in December 1850, when Hong Xiuquan, a Hakka leader of a syncretic Christian sect, defeated local forces sent to disperse his followers. Hong then proclaimed the establishment of the Taiping Heavenly Kingdom and the rebellion spread to several provinces with amazing speed. The following year, the Nian Rebellion started in North China. Unlike the Christian-influenced Taiping rebels, the Nian movement lacked a clear political program, but they became a serious threat to the Qing capital, Beijing, with the mobility of their cavalry-based armies. The Qing imperial forces suffered repeated defeats at the hands of both rebel movements.

In 1853, the Taiping rebels captured Nanjing and for a while it seemed that Beijing would fall next; but the Taiping northern expedition was defeated and the situation stabilized. The Xianfeng Emperor dispatched several prominent mandarins, such as Zeng Guofan and the Mongol general Sengge Rinchen, to crush the rebellions, but they only obtained limited success. The biggest revolt of the Miao people against Chinese rule in history started in 1854, and ravaged the region until finally put down in 1873. In 1856, an attempt to regain Nanjing was defeated and the Panthay Rebellion broke out in Yunnan.

Portrait of the Xianfeng Emperor in his gardens

Meanwhile, an initially minor incident on the coasts triggered the Second Opium War. Anglo-French forces, after inciting a few battles (not all victories for them) on the coast near Tianjin, attempted "negotiation" with the Qing government. The Xianfeng Emperor, under the influence of his Noble Consort Yi (later Empress Dowager Cixi), believed in Chinese superiority and would not agree to any colonial demands. He delegated Prince Gong for several negotiations but relations broke down completely when a British diplomat, Sir Harry Parkes, was arrested during negotiations on 18 September.

The Anglo-French invasion clashed with Sengge Rinchen's Mongol cavalry on 18 September near Zhangjiawan before proceeding toward the outskirts of Beijing for a decisive battle in Tongzhou District, Beijing. On 21 September, at the Battle of Eight-Mile Bridge, Sengge Rinchen's 10,000 troops, including his elite Mongol cavalry, were completely annihilated after several doomed frontal charges against the concentrated firepower of the Anglo-French forces, which entered Beijing on 6 October.

On 18 October 1860, the British and French forces went on to loot and burn the Old Summer Palace and Summer Palace. Upon learning about this news, the Xianfeng Emperor's health quickly deteriorated.

During the Xianfeng Emperor's reign, China lost part of Manchuria to the Russian Empire. In 1858, according to the Treaty of Aigun, the territory between Stanovoy Mountains and Amur River was ceded to Russia, and in 1860, according to the Treaty of Beijing, the same thing happened also to the area east of Ussuri River. After that treaty, the Russians founded the city of Vladivostok in the area they had annexed.

While negotiations with the European powers were being held, the Xianfeng Emperor and his imperial entourage fled to Jehol province in the name of conducting the annual imperial hunting expedition. As his health worsened, the emperor's ability to govern also deteriorated, and competing ideologies in court led to the formation of two distinct factions — one led by the senior official Sushun and the princes Zaiyuan and Duanhua, and the other led by Noble Consort Yi, who was supported by the general Ronglu and the Bannermen of the Yehenara clan.

The Xianfeng Emperor died on 22 August 1861, from a short life of overindulgence, at the Chengde Mountain Resort, 230 kilometers northeast of Beijing. His successor was his surviving six-year-old son, Zaichun. A day before his death, the Xianfeng Emperor had summoned Sushun and his supporters to his bedside and gave them an imperial edict that dictated the power structure during his son's minority. The edict appointed eight men – Zaiyuan, Duanhua, Jingshou, Sushun, Muyin, Kuangyuan, Du Han and Jiao Youying – as an eight-member regency council to aid Zaichun, who was later enthroned as the Tongzhi Emperor. By tradition, after the death of an emperor, the emperor's body was to be accompanied to the capital by the regents. Noble Consort Yi and Empress Consort Zhen, who were now both empress dowagers, travelled ahead to Beijing and planned a coup with Prince Gong that ousted the eight regents. Empress Dowager Cixi then effectively ruled China over the subsequent 47 years as a regent.

The Xianfeng Emperor was interred in the Eastern Qing Tombs, 125 kilometers/75 miles east of Beijing, in the Dingling (定陵; "Tomb of Quietude") mausoleum complex.

The Xianfeng Emperor's reign saw the continued decline of the Qing dynasty. Rebellions in the country, which began the first year of his reign, would not be quelled until well into the reign of the Tongzhi Emperor and resulted in millions of deaths. The Xianfeng Emperor also had to deal with the British and French and their ever growing appetite to expand trade further into China. The Xianfeng Emperor, like his father, the Daoguang Emperor, understood very little about Europeans and their mindset. He viewed non-Chinese as inferior and regarded the Europeans' repeated requests for the establishment of diplomatic relations as an offence. When the Europeans introduced the long-held concept of an exchanged consular relationship, the Xianfeng Emperor quickly rebuffed the idea. At the time of his death, he had not met with any foreign dignitary.

Despite his tumultuous decade of reign, the Xianfeng Emperor was commonly seen as the last Qing emperor to have held paramount authority, ruling in his own right. His son and subsequent successors' rule were overseen by regents, a trend witnessed until the fall of the Qing dynasty. 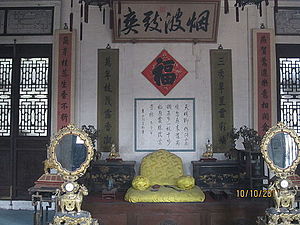 Yanbozhishuang Hall, where the Xianfeng Emperor died on 22 August 1861

See also: Royal and noble ranks of the Qing dynasty and Ranks of Imperial Consorts in China § Qing

The Xianfeng Emperor had a large sexual appetite. He was a lover of opera and alcohol, and often became violent with his servants. He was known to smoke opium.[2]