Xscape buildings are large, strikingly designed and unusually shaped buildings. They are named after the company that developed them, X-Leisure, which is now part of Land Securities. Typically they contain a real snow indoor ski slope, leisure facilities and related shops. There are currently two members of the chain, located in Central Milton Keynes and Yorkshire (both in England) and a former member (that was sold) in Braehead, Scotland.

Xscape Milton Keynes (Lua error in Module:Coordinates at line 668: callParserFunction: function "#coordinates" was not found.) opened in 2000 and is a major feature on the skyline of Central Milton Keynes as seen from the east. The Xscape is 44 metres high,[1] making it the second tallest building in Milton Keynes after Mellish Court in Bletchley. Xscape Milton Keynes features a 170m long real-snow ski slope, a 16-screen cinema, a number of shops and restaurants and a climbing wall. An interesting point is the two large funnels on the front of the building are sometimes mistaken for lifts or part of the cooling system; in fact they are stairs.

Located directly behind the Xscape building is a large square structure that houses an indoor skydiving centre named 'Airkix'. 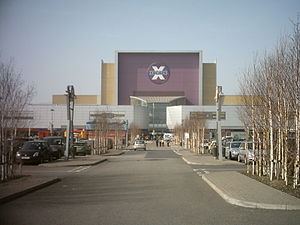 Xscape Yorkshire (Lua error in Module:Coordinates at line 668: callParserFunction: function "#coordinates" was not found.) in Castleford, West Yorkshire is built in a similar style to Xscape Braehead – the many angular parts of the building (particularly when seen from behind) form a shape similar to that of Xscape Milton Keynes. Xscape Yorkshire opened in October 2003 and has a 5,500 square metres (59,202 sq ft) roof.

Xscape Yorkshire was a major development for what was before, an average sized town in West Yorkshire and is situated next to Junction 32, a popular outlet mall formerly known as Freeport. The two combined have really put Castleford on the map.

Xscape Yorkshire contains many shops, clubs, restaurants, and entertainment facilities including a bowling alley, multi screen cinema, laser tag, crazy golf and amusements. The cinema is one of only seven cineworlds in the UK which has D-Box motion seating. It utilises complex ventilation technology.[4]

Xscape formerly had a centre in Renfrew. It was sold to Intu Properties.