Y Wladfa (Welsh pronunciation: [ə ˈwlɑːdfa], The Colony),[2] also occasionally Y Wladychfa Gymreig,[3][4] is a Welsh settlement in Argentina, which began in 1865 and occurred mainly along the coast of Chubut Province in the far southern region of Patagonia.

In the 19th and early 20th century the Argentine government encouraged immigration from Europe to populate the country outside the Buenos Aires region; between 1856 and 1875, 34 settlements of immigrants of various nationalities were established in Santa Fe and Entre Ríos. In addition to the main colony in Chubut, a smaller colony was set up in Santa Fe by 44 Welsh people who left Chubut, and another group settled at Coronel Suárez in southern Buenos Aires Province.[5] In the early 21st century around 50,000 Patagonians were of Welsh descent.[1]

The Welsh-Argentine community is centred on Gaiman, Trelew and Trevelin.[6] Chubut estimates the number of Patagonian Welsh speakers to be about 1,500, while other estimates put the number at 5,000.[7][8] 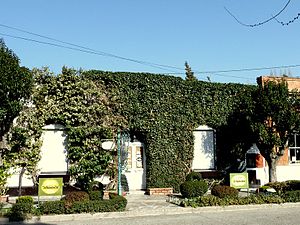 A Welsh tea house in Chubut 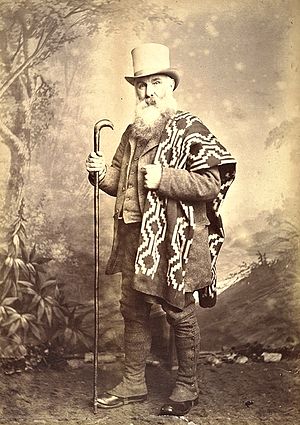 The idea of a Welsh colony in South America was put forward by Professor Michael D. Jones, a Welsh nationalist non-conformist preacher[9]:23 based in Bala who had called for a new "little Wales beyond Wales". He spent some years in the United States, where he observed that Welsh immigrants assimilated very quickly compared with other peoples and often lost much of their Welsh identity.[9]:22 He proposed setting up a Welsh-speaking colony away from the influence of the English language. He recruited settlers and provided financing; Australia, New Zealand and even Palestine were considered, but Patagonia was chosen for its isolation and the Argentines' offer of 100 square miles (260 km²) of land along the Chubut River in exchange for settling the still-unconquered land of Patagonia for Argentina.[9]:23–30

Towards the end of 1862, Captain Love Jones-Parry and Lewis Jones (after whom Trelew was named) left for Patagonia to decide whether it was a suitable area for Welsh emigrants. They first visited Buenos Aires where they held discussions with the Interior Minister Guillermo Rawson then, having come to an agreement, headed south. They reached Patagonia in a small ship named the Candelaria, and were driven by a storm into a bay which they named "Porth Madryn" after Jones-Parry's estate in Wales. The town which grew near the spot where they landed is now named Puerto Madryn. On their return to Wales they declared the area to be very suitable for colonisation.

The permanent European settlement of the Chubut Valley and surrounding areas began on 28 July 1865 when 153 Welsh settlers arrived aboard the converted tea-clipper Mimosa. The Mimosa had cost £2,500 to hire for the voyage and convert to passenger use, and the fare from Liverpool to Patagonia was £12 for adults and £6 for children, although anyone willing to travel was taken on the journey regardless of ability to pay.[10] The Mimosa settlers, including tailors, cobblers, carpenters, brickmakers, and miners, comprised 56 married adults, 33 single or widowed men, 12 single women (usually sisters or servants of married immigrants), and 52 children; the majority (92) were from the South Wales Coalfield and English urban centres.[9]:35 There were few farmers, which was rather unfortunate particularly when they discovered that the attractions of the area had been oversold and they had landed in an arid semi-desert with little food; they had been told that the area was like lowland Wales. At the coast there was little drinking water, and the group embarked on a walk across the parched plain with a single wheelbarrow to carry their belongings. Some died and a baby, Mary Humphries, was born on the march. John Williams was the only colonist with any form of rudimentary medical skill.

Once they reached the valley of the Chubut River, their first settlement was a small fortress on the site which later became the town of Rawson, now the capital of Chubut province.[9]:45 This was referred to as Yr Hen Amddiffynfa (The Old Fortress).[9]:44 The first houses, constructed from earth, were washed away by a flash flood in 1865, and new houses of superior quality were built to replace them.[9]:45–47 The floods also washed away crops of potatoes and maize.[9]:52 The rainfall in the area was much less than the colonists had been led to expect, leading to crop failures. 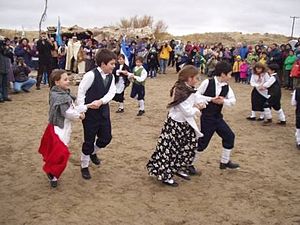 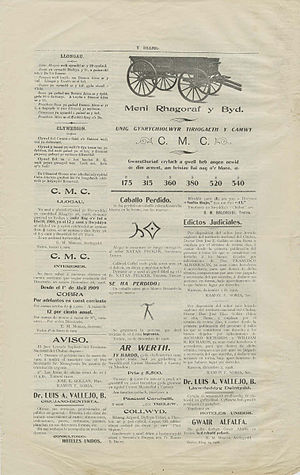 The settlers first made contact with the local Tehuelche people almost a year after their arrival. After some difficult early years of suspicion and some violence, the Tehuelche people established cordial relationships with the Welsh and helped the settlement survive the early food shortages. The settlers, led by Aaron Jenkins (whose wife Rachel was the first to bring up the idea of systematic use of irrigation canals), soon established Argentina's first irrigation system based on the Chubut River (in Welsh, Afon Camwy, "winding river"), irrigating an area three or four miles (five or six km) to each side of the 50-mile (80 km)-long stretch of river and creating Argentina's most fertile wheatlands. Initially the settlers were largely self-governing, with all men and women of 18 years of age or over having the right to vote. By 1885 wheat production had reached 6,000 tons, with wheat produced by the colony winning the gold medal at international expositions at Paris and Chicago.

The mouth of the River Chubut was difficult to navigate, being shallow and with shifting sandbanks, and it was decided that a railway was required to connect the Lower Chubut valley to Puerto Madryn (originally Porth Madryn) on the Golfo Nuevo on the southern side of the Valdes Peninsula.[9]:80–81 Lewis Jones was the driving force, and in 1884 the Argentine Congress authorised the construction of a railway, the Ferrocarril Central del Chubut, by Lewis Jones y Cia. Raising funds for the project locally proved difficult, so Lewis Jones went to the United Kingdom to seek funds, where he enlisted the assistance of Asahel P. Bell, an engineer. Work on the railway began in 1886, helped by the arrival of another 465 Welsh settlers on the steamer Vesta. The town which grew at the railhead was named Trelew (Town of Lew) in honour of Lewis Jones.[9]:86 The town grew rapidly and in 1888 became the headquarters of the "Compañía Mercantil del Chubut" (Chubut Trading Company).

In January 1868, the first newspaper of the colony, Y Brut (The Chronicle), appeared; Ein Breiniad (Our Privilege) followed in 1878. Both were short-lived with only six issues of each title being circulated. Lewis Jones established Y Dravod (Discussion) in 1891, and this had greater longevity, with a weekly issue being produced until 1961.[11] 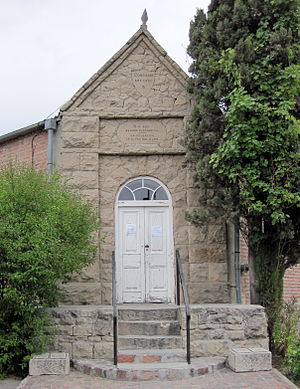 A Welsh school in Patagonia

By the mid-1880s most of the good agricultural land in the Lower Chubut valley had been claimed, and the colonists mounted a number of expeditions to explore other parts of Patagonia to seek more cultivable land. In 1885 the Welsh asked the governor of Chubut, Luis Jorge Fontana, for permission to arrange an expedition to explore the Andean part of Chubut. Fontana decided to accompany the expedition in person. By the end of November 1885 they had reached a fertile area which the Welsh named "Cwm Hyfryd" (Pleasant Valley). By 1888, this site at the foot of the Andes had become another Welsh settlement,[11] named in Spanish "Colonia 16 de Octubre". As the population grew here, the towns of Esquel and Trevelin were founded.

This area became the subject of a dispute between Argentina and Chile. Initially the border was defined by a line connecting the highest peaks in the area, but it later became clear that this line was not the same as the line separating the watersheds, with some of the rivers in the area flowing westwards. Argentina and Chile agreed that the United Kingdom should act as arbitrator, and the views of the Welsh settlers were canvassed. In 1902, despite an offer of a league of land per family from Chile, they voted to remain in Argentina.

Serious damage was caused by floods in the 1890s and 1900s, which devastated Rawson and to a lesser extent Gaiman, though Trelew was not affected. There was also disagreement between the settlers and the Argentine government, which introduced conscription and insisted on males of military age drilling on Sundays. This ran counter to the Sabbatarian principles of the settlers and caused much ill-feeling, though the matter was eventually resolved by the intervention of the Argentine president Julio Argentino Roca. These factors, and a lack of unclaimed farmable land, caused 234 people to leave for Liverpool aboard the Orissa on 14 May 1902, with 208 of them subsequently travelling to Canada, arriving at Saltcoats, Saskatchewan in late June,[12] although some of these families later returned to Chubut. Some other settlers moved to Rio Negro Province in Argentina. Many of those who left Chubut were late arrivals who had failed to obtain land of their own, and they were replaced by more immigrants from Wales. By the end of the 19th century there were some 4,000 people of Welsh descent living in Chubut. The last substantial migration from Wales took place shortly before World War I, which put a halt to further immigration. Approximately 1,000 Welsh immigrants arrived in Patagonia between 1886 and 1911; on the basis of this and other statistics, Glyn Williams estimated that perhaps no more than 2,300 Welsh people ever migrated directly to Patagonia.[13]

In time the colony proved remarkably successful, although as immigration to the area after 1914 was mainly from Italy and other southern European countries, the Welsh gradually became a minority. As well as the irrigation system, the creation of a Co-operative Society (Compañía Mercantil de Chubut) was crucial. The Society traded on the settlers' behalf in Buenos Aires and acted as a bank with 14 branches. The strong chapel-based society was also important, with an emphasis on mutual help and support, social activities and insurance schemes. However, the Co-operative Society collapsed in the Great Depression of the 1930s, and many lost their savings. The construction of a dam on the Rio Chubut 120 km west of Trelew, inaugurated on 19 April 1963, removed the risk of flooding in the Lower Chubut Valley.

The Welsh have left their mark on the landscape, with windmills and chapels across the province, including the distinctive wood and corrugated zinc Capel Salem and Trelew's Salon San David, an attempt to reproduce St David's Cathedral, Pembrokeshire. Many settlements along the valley bear Welsh names. 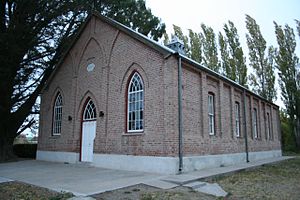 A Welsh chapel in Gaiman

Over the years use of the Welsh language declined, and there was comparatively little contact between Wales and Chubut for many years after 1914. Things began to change when a large number of Welsh people visited Patagonia in 1965 for celebrations to mark the 100th anniversary of the colony. Since then there has been a great increase in the number of visitors from Wales. Teachers are sent to assist in keeping the language alive, and there is some social cachet in knowing the language—even among people who are not of Welsh ancestry. There are still important cultural activities, including chapel, poetry and Welsh teas served in teahouses alongside the river in Gaiman and Dolavon. In 2006, the links between the Chubut Valley and Wales were again underscored, this time in a sporting context. The first of a two-Test tour to Argentina by the Wales national rugby union team was played in Puerto Madryn, a 27–25 win for Argentina. Another example of the Argentina-Wales connection is that Welsh Centre in London has been for many years one of the main venues for dancing Argentine tango. 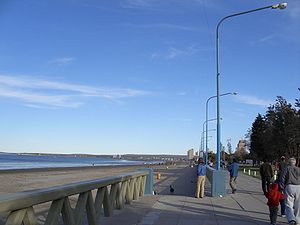 The beach at Puerto Madryn 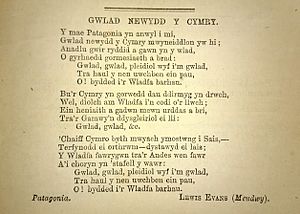 A version of the Welsh national anthem written for the Welsh of Patagonia. Lewis Evans (Meudwy), 1875 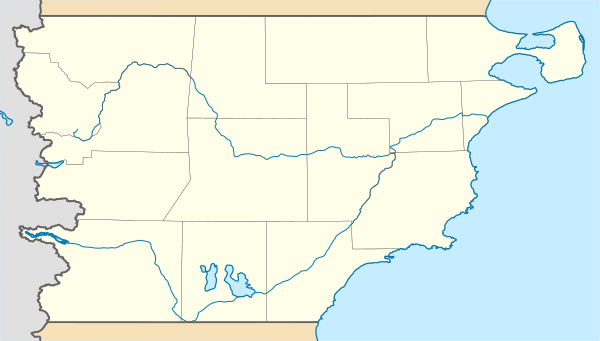