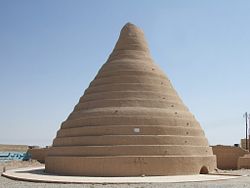 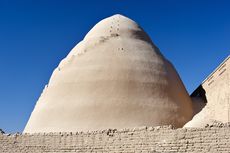 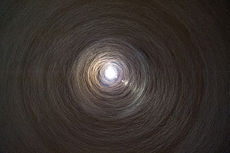 Exterior and interior (dome) of the yakhchal in Meybod, Iran.

Yakhchāl (Persian: یخچال‎‎ "ice pit"; yakh meaning "ice" and chāl meaning "pit") is an ancient type of evaporative cooler. Above ground, the structure had a domed shape, but had a subterranean storage space; it was often used to store ice, but sometimes was used to store food as well. The subterranean space coupled with the thick heat-resistant construction material insulated the storage space year round. These structures were mainly built and used in Persia. Many that were built hundreds of years ago remain standing.[1]

By 400 BC, Persian engineers had mastered the technique of storing ice in the middle of summer in the desert. The ice could be brought in during the winters from nearby mountains, but more commonly they had a wall made along an east-west direction close to the yakhchal. In winter, the qanat water was channelled to the north side of the wall. The shadow of the wall made the water freeze more quickly so more ice was produced per winter day. Ice was stored in a specially designed, passively cooled refrigerator. This was a large underground space (up to 5,000 m3 (180,000 cu ft)) that had thick walls (at least two meters at the base) made out of a special mortar called sārooj, composed of sand, clay, egg whites, lime, goat hair, and ash in specific proportions, and which was resistant to heat transfer. This mixture was thought to be completely water impenetrable. The space often had access to a qanat, and often contained a system of windcatchers or wind towers that could easily bring temperatures inside the space down to frigid levels in summer days. The ice was then used to chill treats for royalty during hot summer days and to make faloodeh, the traditional Persian frozen dessert. 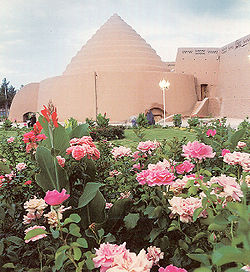 The yakhchal in Kerman is located about one and a half kilometres from the centre of the city. This cone-shaped building is about eighteen metres high. The massive insulation and the continuous cooling waters that spiral down its side keep the ice stored there in winter frozen throughout the summer. These ice houses used in desert towns from antiquity have a trench at the bottom to catch what water does melt from the ice and allow it to refreeze during the cold desert nights. The ice is broken up and moved to caverns deep in the ground where ambient low temperatures remain constant and allow the ice to remain in a frozen state. As more water runs into the trench, the process is repeated. Often seen around the ice houses and many of the homes in the desert are towers called badgirs or wind traps. Built of mud or mud brick, these badgirs, mentioned by Marco Polo, are square or round, but the operating principle is the same: to catch the slightest breeze in the vents at the top and to funnel the cooling air down through internal, vertically-placed wooded slats to the water or dwelling below. Alternately, the badgir can function as a chimney, expelling warm air to pull cool air out of a qanat (an underground stream).

In present-day Iran, Afghanistan and Tajikistan, the term yakhchal is also used to refer to modern household (and commercial) refrigerators.