From Infogalactic: the planetary knowledge core
Jump to: navigation, search
File:KibrisliMehmedEminPashaYali Kandilli Istanbul Turkey.jpg
Yalı of Kıbrıslı Mehmed Emin Pasha in Kandilli, along the Anatolian shores of the Bosphorus in Istanbul.

A yalı (Turkish: yalı, from Greek yiáli γιαλή (mod. γιαλός), literally "seashore, beach"[1][2]) is a house or mansion constructed at immediate waterside (almost exclusively seaside, particularly on the Bosphorus strait in Istanbul) and usually built with an architectural concept that takes into account the characteristics of the coastal location. A family who owned a waterside residence would spend some time in this usually secondary residence located at the sea shore, as opposed to the "konak" (mansion, aside from the term's use to refer to buildings with administrative functions) or the "köşk" (pavilion, often serving a determined practical purpose, such as hunting, or implying a temporary nature). Thus, going to the "yalı" acquired the sense of both going to the seaside and to the house situated there. In its contemporary sense, the term "yalı" is used primarily to denote the total amount of 620 waterside residences, mostly dating from the 19th century (some of them date from the 18th century, and some from the early 20th century), sprinkled along the Bosphorus in Istanbul. As such, they constitute one of the city's landmarks. 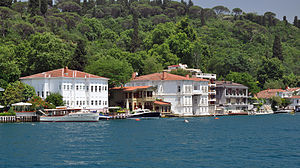 Yağlıkçı Hacı Reşit Bey Yalısı and Prenses Rukiye Yalısı in Kanlıca, along the Anatolian shores of the Bosphorus.

Finely worked wood was the predominant construction material chosen for yalıs, as it was for the large majority of traditional Turkish houses. Successive restorations often caused the wooden parts of the overall structure to be gradually reduced, but wood nevertheless remains the prominent and identifying material of historic yalıs. It is not uncommon for the most recently restored mansions to employ wood principally for external decoration purposes.

File:Wooden building on the Bosphorus.jpg
Yalı of Ahmet Afif Pasha in Yeniköy on the European coast of the Bosphorus, designed by Alexander Vallaury.

The oldest surviving yalı is the one built by the grand vizier Amcazade Köprülü Hüseyin Pasha (of the highly influent Köprülü family) in 1699 at the Kanlıca neighbourhood (within Beykoz district), on the Asiatic shores of the Bosphorus. From this yalı, the hall of audience (divanhane) and its immediate annexes have survived. On the opposite European shores, the oldest to remain is the "Şerifler Yalısı" in the Emirgan neighbourhood (within Sarıyer district), which was built in 1780 but bears the name of a later owner. The most expensive yalı is "Erbilgin Yalısı" located in Yeniköy, Istanbul. Forbes magazine listed "Erbilgin Yalısı" as the fifth most expensive house in the world with a price tag of $100 million.[3]

Cornucopia, a magazine about the arts, culture and history of Turkey, has a regular feature on the Bosphorus yalıs, their architecture and their interiors.[4] Notable inclusions have been the Yalı of Kıbrıslı Mehmed Emin Pasha,[5] the Yalı of Ethem Pertev,[6] the Yalı of Saffet Pasha,[7] and the Yalı of Zeki Pasha.[8]

There are also historical yalis available for commercial lease.