Yale Law alumni include many prominent figures in law and politics, including United States presidents Gerald Ford and Bill Clinton and former U.S. secretary of state and presidential nominee, Hillary Clinton. Alumni also include current United States Supreme Court associate justices Clarence Thomas, Samuel Alito, Sonia Sotomayor and Brett Kavanaugh, as well as a number of former justices, including Abe Fortas, Potter Stewart and Byron White; several heads of state, including Karl Carstens, the fifth president of Germany, Jose P. Laurel, the third president of the Republic of the Philippines; and Peter Mutharika, the immediate former president of Malawi; five current U.S. senators; the former governor of California and immediate former governor of Rhode Island and current United States Secretary of Commerce; and the current deans of two of the top fourteen-ranked law schools in the United States: Virginia and Cornell.

The school began in the New Haven law office of Seth P. Staples in the 1800s, who began training lawyers. By 1810 he was operating a law school. He took on a former student, Samuel J. Hitchcock as a law partner, and Hitchcock became the proprietor of the New Haven Law School, joined by David Daggett in 1824. The Yale Law School shield (shown at the upper right of this page) shows staples and a rampant dog, representing Seth Staples and David Daggett. The school's affiliation with Yale began in the mid-1820s and in 1843, the school's students began receiving Yale degrees.[8] 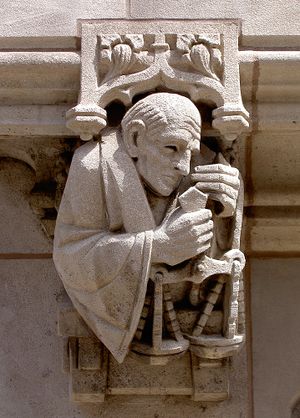 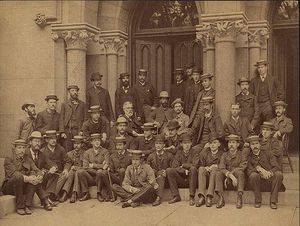 A special relationship or connection developed between YLS and the United States Court of Appeals for the Second Circuit. Professors Clark and Frank, among others, became judges on that court. Some of the faculty members who became Second Circuit judges continued to teach courses at YLS and chose their clerks from student graduates. These judges influenced thinking in general at YLS and particularly reinforced student interest in public service, a characteristic tradition at YLS since the New Deal.[citation needed] 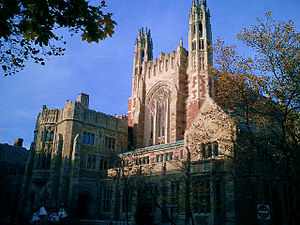 Yale Law School is housed in the Sterling Law Building, erected in 1931. Modeled after the English Inns of Court, the law building is located at the heart of Yale's campus and contains a law library, a dining hall, and a courtyard.

The institution is known for its scholarly orientation; a relatively large number of its graduates (9%) choose careers in academia within five years of graduation, while a relatively low number (46%) choose to work in law firms five years after graduation.[11] Another feature of Yale Law's culture since the 1930s, among both faculty and student graduates, has been an emphasis on the importance of spending at least a few years in government service.[12] A similar emphasis has long been placed on service as a judicial law clerk upon graduation.[13] Its 7.6:1 student-to-faculty ratio is the third lowest among U.S. law schools.[14]

Yale Law does not have a traditional grading system, a consequence of student unrest in the late 1960s.[15] Instead, it grades first-semester first-year students on a simple Credit/No Credit system. For their remaining two-and-a-half years, students are graded on an Honors/Pass/Low Pass/Fail system. Similarly, the school does not rank its students. It is also notable for having only a single semester of required classes (plus two additional writing requirements), instead of the full year most U.S. schools require. Unusually, and as a result of unique Connecticut State court rules, Yale Law allows first-year students to represent clients through one of its numerous clinics; other law schools typically offer this opportunity only to second- and third-year students.

Students publish nine law journals that, unlike those at most other schools, mostly accept student editors without a competition. The only exception is YLS's flagship journal, the Yale Law Journal, which holds a two-part admissions competition each spring, consisting of a four or five-hour "bluebooking exam," followed by a traditional writing competition. Although the Journal identifies a target maximum number of members to accept each year, it is not a firm number. Other leading student-edited publications include the Yale Journal on Regulation, the Yale Law and Policy Review, and the Yale Journal of International Law.

In November 2013, it was announced that a $25 million donation would bring student dormitory living back onto campus, with renovations to begin in 2018.[16]

Yale Law has been ranked the number one law school in the United States by U.S. News & World Report in every year in which the magazine has published law school rankings.[17] Among U.S. law schools, Yale has the lowest acceptance rate and the highest yield rate—whereas less than 5% of applicants are admitted, about 80% of those who are accepted ultimately enroll, either in the Fall following their acceptance or after a deferral.[18][19][20] It is currently ranked as the second best law school in U.S (behind Harvard) and fourth in the world by the 2016 QS Rankings.[21] The school also saw a greater percentage of its students go on to become Supreme Court clerks between the 2000 and 2010 terms than any other law school, more than double the percentage of the second-highest law school (Harvard Law School).[22] Additionally, a 2010 survey of "scholarly impact," measured by per capita citations to faculty scholarship, found Yale's faculty to be the most cited law school faculty in the United States.[23]

Yale Law School enrolls about 200 new students a year, creating one of the smallest classes among top U.S. law schools. Its small class size and prestige combine to make its admissions process the most competitive in the United States. Half of the class that entered in 2015 had a GPA above 3.93 and/or an LSAT score above 173 (on a possible scale of 120 to 180) or 99th percentile.[24]

After an initial round of screening by the admissions department, approximately 25% of applications are independently evaluated by three different faculty members. Each application is scored from 2–4 at the discretion of the reader. All applicants with a perfect 12 (i.e., a 4 from all three faculty members) are admitted, upon which they are immediately notified by the school. There are also 50–80 outstanding students admitted each year without going through this review process.[25][26]

The LL.M. Program and the Visiting Researchers Program at Yale Law are amongst the smallest and most selective graduate law programs in the United States. Yale Law admits around 25 LL.M. students and around 10 visiting researchers every year.[27] These programs are usually limited to those students who intend to pursue a career in legal academia.

The Yale Law School houses over two dozen clinics that allow students to represent clients in real-world legal problems. Participation in clinics is common among Yale Law students, with over 80% of degree candidates participating in clinical activities prior to graduation.[29]

Yale Law's clinics cover a wide range of issue areas and legal fields. Students represent clients before courts at all levels of the federal judiciary, state courts in Connecticut and other states, international tribunals and adjudicative bodies, administrative processes, and private arbitration. The Yale Law School has greatly expanded its clinical programs in recent years, adding eight new clinics during the 2016-2017 academic year.[30]

Yale Law School signed in June 2011 an Agreement for Collaborative Activities to create an environment for long-term joint research, exchange and programming activities, with Paris 2 Panthéon-Assas University, the direct inheritor of the Faculty of Law of Paris and acting law school of the Sorbonne University.[31] They organize, together with the ESSEC Business School, a summer school in law and economics, the Yale-Paris II-Essec Summer School.[32][33]

The annual total cost of attendance (indicating the cost of tuition, fees, mandatory university health insurance, and living expenses) at Yale Law School for the 2021–2022 academic year is $93,821.[38]

The law school was ranked # 17 of all law schools nationwide by the National Law Journal in terms of sending the highest percentage of 2015 graduates to the largest 100 law firms in the US (23.58%).[44] 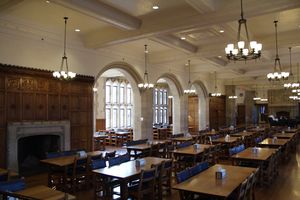