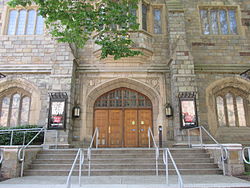 The school traces its roots to the Yale Dramatic Association, the second-oldest college theatre association in the country, founded in 1900. The "Dramat" produced the American premieres of Albert Camus's Caligula and Shakespeare's Troilus and Cressida, as well as original works by Cole Porter, Stephen Vincent Benet, and Thornton Wilder written when they were students. This lively dramatic tradition led to the provision of funds, in 1924, by Yale benefactor Edward S. Harkness, to establish the Department of Drama in the School of Fine Arts, and for the construction of the University Theatre, designed by Clarence H. Blackall and then later renovated by James Gamble Rogers in 1931.[3] George Pierce Baker, a teacher of playwriting, was the first chairman of the department. The first Master of Fine Arts in drama was granted in 1931.

In 1955, the department was organized as a separate professional school, the first such in the Ivy League. In 1966, under Dean Robert Brustein, the Yale Repertory Theatre was formed to establish further ties between the professional and academic communities. Lloyd Richards, dean and artistic director from 1979 to 1991, increased the theatre's emphasis on new plays, premiering works by Athol Fugard, Lee Blessing, and August Wilson.[4] Richards' successor as dean and artistic director, Stan Wojewodski, Jr. continued to emphasize the production of new plays, including several important works by Suzan-Lori Parks and Theatre de la Jeune Lune. The current dean/artistic director, James Bundy, has produced notable premieres by David Rabe, Jose Rivera, David Adjmi, and Sarah Ruhl, among others, as well as Radio Golf, the tenth play in August Wilson's 20th century cycle.

Today, Yale Drama students work on School of Drama productions, at the Yale Repertory Theatre, and at the Yale Cabaret.

School of Drama students spend the morning in class, with the exact number of hours varying by their year in school and their department. After 2 p.m., all classes are over, and rehearsals for Yale Repertory Theatre and School of Drama productions begin. Rehearsals can last up to eight hours. After rehearsal hours are over at 11 p.m., many students choose to continue rehearsing for productions at the Yale Cabaret, often working outside their discipline, on projects they have chosen and lead without any input from faculty. Many weeks throughout the school year, students attend two or even three productions a week produced by their colleagues, and some take the hour-and-forty-minute train ride to New York City to see performances there. Students also participate in athletic clubs, like soccer and volleyball, and mingle at events with their compatriots in the Yale School of Art and Yale School of Architecture.

The School of Drama offers a Master of Fine Arts in acting, design (with emphasis in sets, costume, lighting and projection), directing, dramaturgy and dramatic criticism, playwriting, stage management, sound design, technical design and production, and theatre management (with a joint M.F.A./Master of Business Administration available to management students in conjunction with the Yale School of Management). Students must hold an undergraduate degree and complete their program of study with distinction, which requires three years in residence. A Certificate in Drama is available to those students who do not hold an undergraduate degree from an accredited college, but who are admitted and complete the same training as M.F.A. students. The school also offers a Doctor of Fine Arts to students who hold an M.F.A. degree in Dramaturgy and Dramatic Criticism and have written a dissertation approved by the D.F.A. committee, and a Technical Internship Certificate to students who complete a one-year internship program of the Technical Design and Production department.[5]

The mainstage season consists of five fully supported productions, three directed by third-year directors as a culmination of their work at the school and three written by third-year playwrights and presented in May under the auspices of the Carlotta Festival of New Plays. In addition, there are many smaller-scale productions staged throughout the year, including the Shakespeare Repertory Projects directed by second-year directors, acting projects directed by faculty members, the Langston Hughes Festival of New Plays by second-year playwrights, and the Thornton Wilder Festival of One-Act Plays by first-year playwrights (the "New Play Lab").[6]

Founded in 1968, the Yale Cabaret provides an extracurricular outlet for Yale School of Drama students, who produce passion projects and operate the theatre entirely on their own. Students regularly work outside their disciplines (designers act, dramaturgs sing, and actors direct, for example) in the 18 productions presented for a paying public audience. According to the Yale Cabaret website, "during their time at the Yale School of Drama, Patricia Clarkson, Tony Shalhoub, Kate Burton, David Alan Grier, Christopher Durang, Wendy Wasserstein, among countless others, all performed at the Cabaret."[7]