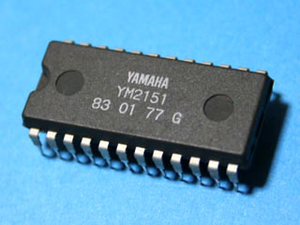 The Yamaha YM2151, also known as OPM (FM Operator Type-M) is an eight-channel, four-operator sound chip. It was Yamaha's first single-chip FM synthesis implementation, being created originally for some of the Yamaha DX series of keyboards (DX21, DX27, and DX100[1]). Yamaha also used it in some of their budget-priced electric pianos, such as the YPR-7, -8, and -9.

It was used in many arcade game system boards, starting with Atari's Marble Madness in 1984, then Sega arcade system boards from 1985, and then arcade games from Konami, Capcom, Data East, and Namco, as well as Williams pinball machines, with its heaviest use in the mid-to-late 1980s. It was also used in Sharp's X1 and X68000 home computers.[2]

Finally, the chip was used in the Yamaha SFG-01 and SFG-05 FM Sound Synthesizer units. These are expansion units for MSX computers and were already built into some Yamaha MSX machines like the CX5M. Later SFG-05 modules contain the YM2164 (OPP), an almost identical chip that differs only in a few undocumented registers and is otherwise identical. The SFGs were followed by the Yamaha FB-01, a standalone version powered exclusively by the YM2164.

The YM2151 was paired with either a YM3012 stereo DAC or a YM3014 monophonic DAC so that the output of its FM tone generator could be supplied to speakers as analog audio.[3]

A popular VSTi named VOPM, as its name suggests, emulates the YM2151. This was inspired by its author being an avid fan of the Sharp X68000, one of the various devices in which the YM2151 appeared. As well as being popular for emulating the OPM, due to the similarities between the OPM and several other Yamaha single-chip FM synthesizers, including the YM2612 in the Sega Mega Drive/Genesis, VOPM is popular among fans of various consoles and chiptune-based music for its ability to play instruments from games and very closely emulate their sounds.