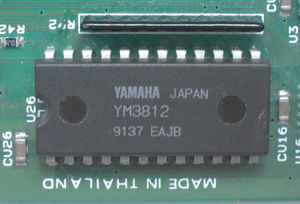 Yamaha YM3812
File:PEHMOPOP.ogg
An audio sample of music written for and played on YM3812

The Yamaha YM3812 also known as the OPL2 (OPL is an acronym for FM Operator Type-L) is a sound chip (i.e. integrated circuit) created by Yamaha Corporation in 1985 and famous for its wide use in IBM PC-based sound cards such as the AdLib and Sound Blaster.

It is backwards compatible with the OPL aka YM3526, to which it is very similar – in fact, it only adds 3 new waveforms. An upgraded version of the OPL2, the OPL3 aka YMF262, was also popular in later sound cards such as the Soundblaster 16. Another related chip is the YM2413 (OPLL), which is a cut down version.

The circuit has 244 different write-only registers. It can produce 9 channels of sound, each made of two oscillators or 6 channels with 5 percussion instruments available. Each oscillator can produce sine waves which may also be modified into 3 other waveforms – the negative part of the sine can be muted or inverted, and pseudo sawtooth waves (¼ sine waves upward only with silent sections in between) can also be produced. This odd way of producing waveforms give the YM3812 a characteristic sound. Each wave generator has its own ADSR envelope generator. Its main method of synthesis is Frequency modulation synthesis, done by phase modulation of the phase of one of the channel's oscillators by the output of the other.

Overview of a channel's registers:

For the whole channel:

For each one of the 2 oscillators:

There are also a few parameters that can be set for the whole chip:

The internal operation of the chip is completely digital. Each FM-tone is generated by a digital oscillator using a form of direct digital synthesis. A quarter of the log-transformed sine waveform is stored as a sampled approximation in a 256-word read-only memory (ROM) table. The rest of the sine-waveform is extrapolated via its property of symmetry. Scaling the output of an oscillator to a wanted volume would normally be done by multiplication, but the YM3812 avoids multiplications by operating on log-transformed signals, which reduces multiplications into computationally cheaper additions. Another 256-word ROM stores the exponential function as a lookup table, used to convert the logarithmic scale signal back to linear scale when required, as the final stage where the oscillator-outputs are summed together (just prior to the DAC-output bus), with the modulator waveform always delayed by one sample before the carrier waveform.[1] The YM3812's output, a sequence of floating point numbers clocked at a sampling frequency of approximately 49716 Hz, is sent to a separate digital-to-analog converter (DAC) chip, the YM3014B.