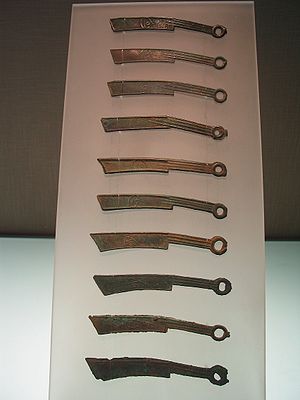 Yan (Chinese: 燕; Old Chinese: *ʔˤa[n]) was an ancient Chinese state during the Zhou dynasty.[2][3] Its capital was Ji (later known as Yanjing and now Beijing).[4] During the Warring States period, the court was also moved to another capital at Xiadu at times.[5]

The history of Yan began in the Western Zhou in the early first millennium BC. After the authority of the Zhou king declined during the Spring and Autumn Period in the 8th century BC, Yan survived and became one of the strongest states in China. During the Warring States period from the 5th to 3rd centuries BC, Yan was one of the last states to be conquered by the armies of Qin Shihuang: Yan fell in 222 BC, the year before the declaration of the Qin Empire. Yan experienced a brief period of independence after the collapse of the Qin dynasty in 207 BC, but it was eventually absorbed by the victorious Han.

According to Sima Qian's Records of the Grand Historian, King Wu of Zhou deposed King Zhou of Shang at the Battle of Muye |c. 1046 BC and conferred titles to nobles within his domain, including the rulers of the Yan.[6]

In the 11th century BC, Yan's capital was based in what is now Liulihe Township, Fangshan District, Beijing, where a large walled settlement and over 200 tombs of nobility have been unearthed.[7] Among the most significant artifacts from the Liulihe Site is a bronze ding with inscriptions that recount the journey of the eldest son of the Duke of Yan, who delivered offerings to the King of Zhou in present-day Xi'an and was awarded a position in the king's court.

In the 3rd century BC, the Yellow River followed a more northerly course than the present day. It emptied into the Bohai Sea at a point south of Tianjin in what is now Hebei as opposed to its modern end in Shandong. Some time during the 7th century BC in the late Western Zhou or early Eastern Zhou, Yan absorbed the State of Ji, a smaller kingdom to the north and moved its capital to that of Ji in modern-day Xicheng District, Beijing.

Yan stretched from the Yellow River to the Yalu River and from the mountains of Shanxi to the Liaodong Peninsula. As the most northeastern of all the Chinese states during this time period, Yan faced incursions from steppe nomads and built great walls in southern Liaoning.

To the south, the bordering states of Zhao and Qi were Yan's main rivals. The mountainous border in the west between Zhao and Yan became the area in which their armies often clashed. Despite this, the war between Zhao and Yan usually dragged on into a stalemate, requiring the help of other kingdoms to conclude.

The strongest opposition came from the Qi, one of the strongest states in China. In 314 BC, taking advantage of a succession crisis within Yan, Qi invaded and in a little over several months practically conquered the country. However, due to the misconduct of Qi troops during the conquest of Yan a revolt eventually drove them away and the borders of Yan were restored. Yan's new king, King Zhao of Yan then plotted with the states of Zhao, Qin, Han and Wei for a joint expedition against Qi. Led by the brilliant tactician Yue Yi, it was highly successful and within a year most of Qi's seventy walled cities had fallen, with the exception of Zimu and Lu. However, with the death of King Zhao and the expulsion of Yue Yi to Zhao by the new king, King Wei of Yan, General Tian Shan managed to recapture all of the cities from the 5 kingdoms.

Despite the wars, Yan survived through the Warring States period. In 227 BC, with Qin troops on the border after the collapse of Zhao, Crown Prince Dan sent an assassin named Jing Ke to kill the king of Qin (later Qin Shi Huang), hoping to end the Qin threat. The mission failed, with Jing Ke dying at the hands of the King of Qin in Xianyang.

Surprised and enraged by such a bold act, the king of Qin called on Wang Jian to destroy Yan. Crushing the bulk of the Yan army at the frozen Yi River, Ji fell the following year and the ruler, King Xi, fled to the Liaodong Peninsula.

In 222 BC, Liaodong fell as well, and Yan was totally conquered by Qin. Yan was the third last state to fall, and with its destruction the fates of the remaining two kingdoms were sealed. In 221 BC, Qin conquered all of China, ending the Warring States period and founding the Qin dynasty.

In 207 BC, the Qin dynasty collapsed and China resumed a state of civil war. King Wu Chen of Zhao eventually sent General Han Guang to conquer Yan for Zhao, but upon his conquest, Han Guang appointed himself King of Yan. Han Guang had sent General Zang Tu to assist Xiang Yu, the king of Chu, in his war against Qin. When Zang Tu returned, Han Guang was ordered to become King of Liaodong instead. When Han Guang refused, Zang Tu killed him and declared himself King of both Yan and Liaodong.

Zang Tu submitted Yan to the Han dynasty during the war between Han and Chu in order to keep his title, but once the war was finished he revolted. Liu Bang (later Emperor Gaozu of Han) sent Fan Kuai and Zhou Bo to put down the rebellion, and they captured and executed Zang Tu.

Lu Wan became the new King of Yan and reigned there for most of Liu Bang's life until he failed to meet a summons to the Imperial Court due to illness. He fled to the Xiongnu to avoid being executed. Yan then came under direct control of the Han dynasty.

Before Qin unified China, each state had its own customs and culture. According to the Yu Gong or Tribute of Yu, composed in the 4th or 5th century BC and included in the Book of Documents, there were nine distinct cultural regions of China, which are described in detail in this book. The work focuses on the travels of the titular sage, Yu the Great, throughout each of the regions. Other texts, predominantly military, also discussed these cultural variations.[10]

One of these texts was The Book of Master Wu, written in response to a query by Marquis Wu of Wei on how to cope with the other states. Wu Qi, the author of the work, declared that the government and nature of the people were reflective of the terrain they live in. Of Yan, he said:

The Yan are a sincere and straightforward people. They are cautious, love courage and righteousness and rarely employ deception. Thus they will defend their positions, but are immobile and incapable of innovation. To defeat them, we must be unconventional, by attacking them at the rear and flanks, where and when they least expect it. When they turn to face our attacks, we should keep a distance. When they withdraw to face another threat, chase them. This will confuse them and create fear in their ranks. If we avoid conflict against their strong points and use our armored chariots to set ambushes, we can capture their generals and insure victory.