Yaropolk I of Kiev

Yaropolk I Svyatoslavich (c. 958–960 – 11 June? 980) (East Slavic: Ярополк I Святославич, sometimes transliterated as Iaropolk) was a young and rather enigmatic ruler of Kiev between 972 and 980. He was the oldest son of Svyatoslav. His royal title is traditionally translated as "Prince".

Yaropolk was given Kiev by his father Svyatoslav I, who left on a military campaign against the Danube Bulgars. Soon after Svyatoslav's death, however, civil war began between Yaropolk and his brothers. According to one chronicle, Yaropolk's brother Oleg killed Lyut, the son of Yaropolk's chief adviser and military commander Sveneld. In an act of revenge and at the insistence of Sveneld, Yaropolk went to war against his brother and killed him. Then, Yaropolk sent his men to Novgorod, from which his other brother Vladimir had fled on receiving the news about Oleg's death. Yaropolk became the sole ruler of Rus'. 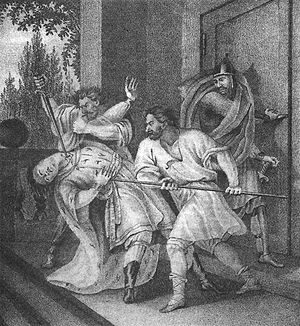 In 980, Vladimir returned with the Varangian mercenaries and attacked Yaropolk. On his way to Kiev, Vladimir seized Polotsk because Rogneda, daughter of the Polotsk prince Rogvolod, had chosen Yaropolk over him. Vladimir forced Rogneda to marry him. Then, Vladimir seized Kiev with the assistance from a boyar Blud, who had become Yaropolk's chief adviser upon the death of Sveneld. Blud betrayed Yaropolk by advising him to flee from Kiev and go into retreat in the town of Rodnya at the mouth of the Ros' River. Vladimir besieged Rodnya and starved Yaropolk into negotiations. Yaropolk trusted Blud and his brother's promises of peace and left for Vladimir's headquarters, where he would be killed in an ambush by two Varangians.

As for contemporary foreign sources, Lambert of Hersfeld records that, on the Easter of 973, the Holy Roman Emperor was visited by envoys from Rus' (legati gentium Ruscorum). In later centuries it was said that Yaropolk also exchanged ambassadors with the Pope. The Chronicon of Adémar de Chabannes and the life of St. Romuald (by Pietro Damiani) document how St. Bruno of Querfurt was sent to Rus' (Latin: Russia) and succeeded in converting a local king (one of three brothers who ruled the land) to Christianity. As both texts are rife with anachronisms, Vladimir Parkhomenko reasons that Bruno's deeds were conflated with those of his predecessors, Adalbert of Prague and several anonymous missionaries active in Eastern Europe during Otto II's reign.[1]

Following this line of thought, Alexander Nazarenko suggests that Yaropolk went through some preliminary rites of baptism, but was murdered by his pagan half-brother (whose own rights to the throne were questionable) before he could be formally received in the Christian faith. Any information on Yaropolk's baptism according to the Latin rite would be suppressed by later Orthodox chroniclers, zealous to keep Vladimir's image of the Russian Apostle untarnished for succeeding generations.[2] It is known that Vladimir's son Yaroslav had Yaropolk's bones exhumed, christened and interred in the Church of the Tithes.[3]

It is known that Yaropolk was married to a Greek nun. They had a son: